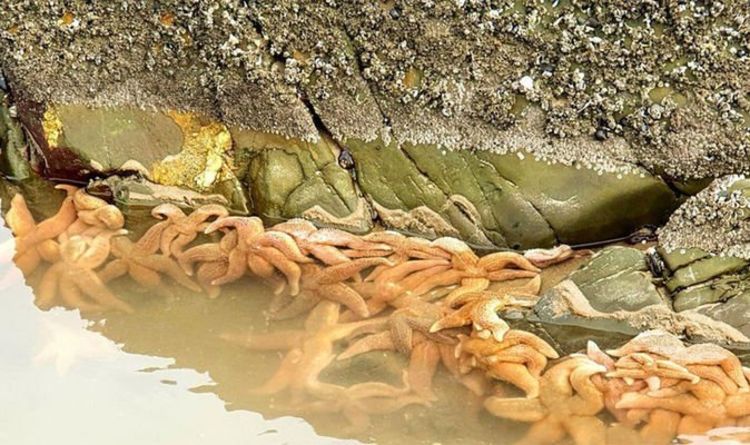 The creatures were spotted along the beach from Coppet Hall in Saundersfoot all the way up to Tenby. An amateur photographer reported there were tens of thousands of the dead sea creatures.

Giles Davies, an amateur nature photographer, said he had “never seen something like this before”.

The photographer snapped thousands of the stranded sea creatures on Coppet Hall Beach in Pembrokeshire.

He added: “It’s really sad to just see that in nature because you’re looking at deaths in the thousands of one species.”

Speaking to the BBC, Mr Davies said there had been reports of starfish stranded on beaches from Coppett Hall all the way up the coastline to Tenby, Pembrokeshire.

He told the outlet: “That would kind of make sense because Tenby is the first place where the tide turns in Wales, so when you get strandings they come to shore generally in that area.

“But it’s the sheer volume, you’re always going to get winter tides where stuff will come ashore.

“For that volume to come ashore, no, something seriously has gone wrong with nature.”

Jake Davies, a marine biologist who works for the Angel Shark Project Wales, pointed the finger at large storms, which he said are often the cause of such events.

He said: “This type of event of stranding does occur following a big storm along with big tides.

“Every year there are images of large strandings of starfish coming ashore.

“A similar event was seen on the Gower beach [last] year where rock pools were full of starfish.

The Marine Conservation Society said extreme weather is the likely cause of such incidents.

In November 2021, following Storm Arwen, hundreds of starfish and other sea creatures were found washed up at Culbin Sands, near Nairn.

Charlie Maciejewski, of Inverness, told the BBC the stranding, which also included clams and crabs, covered a 100m (328ft) stretch of sand on the Moray Firth coast.

Hundreds of seal pups were also found dead at a nature reserve in St Abb’s Head.

The National Trust for Scotland said it had never seen damage of such a scale before, and revealed there were 224 dead pups in the water in a small area of the bay at Pettico Wick with more washing ashore.