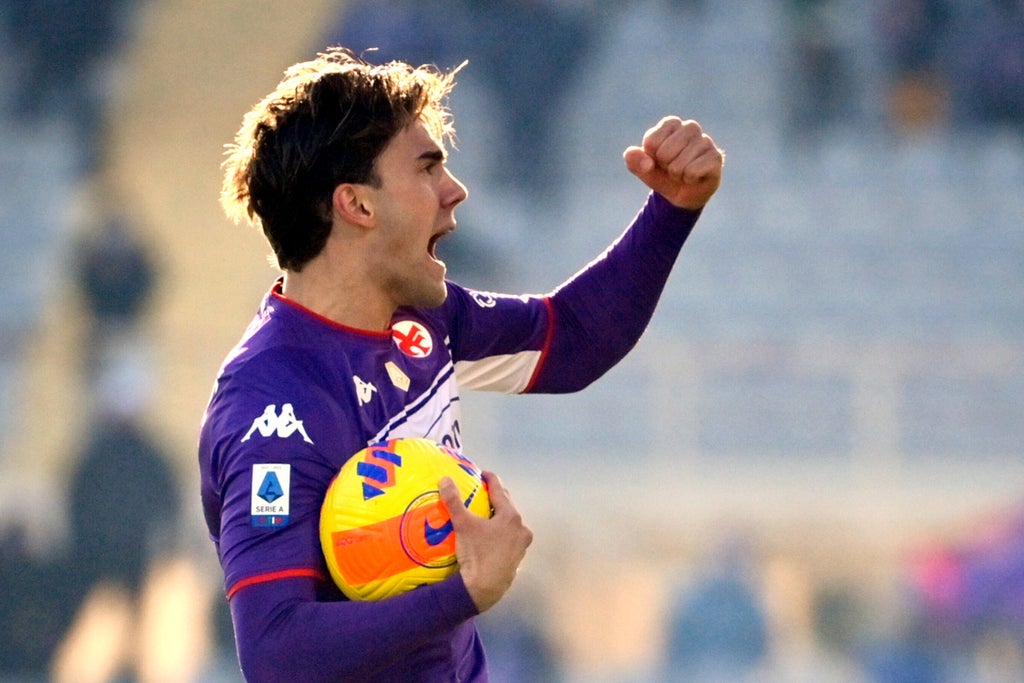 Arsenal look set to be major players in the January window as they continue talks over a blockbuster mid-season deal for Fiorentina striker Dusan Vlahovic.

Meanwhile, the Gunners have also been offered the chance to sign Juventus’ Arthur Melo, with Leicester star Youri Tielemans also under consideration as Mikel Arteta looks to solve his midfield issues.

North London rivals Tottenham are targeting Jesse Lingard, who many had expected to return to West Ham from Old Trafford this month, while they are also trying to sign Adama Traore from Wolves.

Manchester United are the latest club to be linked with Brighton’s Tariq Lamptey as they also continue their pursuit of Switzerland international Denis Zakaria, with Paul Pogba attracting interest from Paris Saint-Germain.

Cristiano Ronaldo has offered his backing to Ralf Rangnick, but admits it is unacceptable for United to finish outside the top three this season, with doubts emerging over Marcus Rashford’s future and Barcelona’s Ousmane Dembele linked with the club.

Antonio Rudiger may have performed a U-turn over his Chelsea future, though Thomas Tuchel has reportedly revived his interest in Jules Kounde as he also considers Presnel Kimpembe and Aurelien Tchouameni.

Manchester City are said to be in pole position to land Borussia Dortmund talisman Erling Haaland, while Aston Villa are set to sign Lucas Digne as they also go after Brighton’s Yves Bissouma.

Follow all the latest transfer news, gossip and rumours LIVE with Standard Sport’s blog below!

The issue of Antonio Rudiger’s future has been a dominant theme at Chelsea over recent months.

The German centre-back is a key player under Thomas Tuchel, yet had looked set to depart this summer with his contract due to expire and the likes of PSG, Bayern Munich, Juventus and Real Madrid all keen on a deal.

However, Bild now report that Rudiger has performed something of a U-turn and would like to stay at Stamford Bridge.

It is claimed that talks between the two camps have improved after the 28-year-old was initially left very unimpressed by Chelsea’s contract offer.

Tottenham are prepared to wait until the summer to act on their long-term transfer interest in Manchester United‘s Jesse Lingard, report Jack Rosser and Dan Kilpatrick.

Spurs have considered Lingard a target since Jose Mourinho‘s time in North London and are now in the race to land the England international when he becomes a free agent at the end of the season.

It is thought there will be a number of suitors come the end of the season, with Newcastle United having already been linked this month but Spurs’ interest can be tracked back to over a year.

The North Londoners made an approach to United and Lingard over the summer window while Nuno Espirito Santo was in charge.

Arthur Melo isn’t the only new midfield name being mentioned in connection with Arsenal.

Per Goal, the Gunners are also looking at Leicester star Youri Tielemans and have held talks with the Belgian’s agent over a potential move.

Tielemans is out of contract at the King Power in the summer of 2023, though any departure looks more likely in the summer at this stage.

The Brazilian has struggled for action this season and he has started just three Serie A games during the current campaign.

As a result, the 25-year-old is keen to secure a move in January and Arsenal have emerged as an option.

Intermediaries have offered Arsenal the chance to sign Arthur on loan and the north London club are assessing their options.

The Gunners want to bring in a midfielder this month but long-term targets, such as Lyon’s Bruno Guimaraes, will be hard to sign during the current transfer window.

Speaking of Manchester United, they are also said to have joined the race for Tariq Lamptey.

Arsenal and Tottenham have also been linked with the Brighton full-back, who has shone on the south coast since leaving Chelsea.

The Daily Mail report that United have a strong interest in Lamptey as Ralf Rangnick looks to upgrade on the likes of Aaron Wan-Bissaka and Diogo Dalot.

However, the two clubs are said to be £10m apart in terms of their valuation of the player.

Manchester United are said to have made their move for long-term target Denis Zakaria.

The Red Devils – along with rivals Liverpool – have been frequently linked with the Swiss midfielder, who is out of contract at Borussia Monchengladbach at the end of the season.

Now Bild in Germany report that United have made an offer to Zakaria’s agents and are willing to pay a fee now to secure the deal rather than waiting to complete a free transfer in the summer.

We begin with the latest at Arsenal, who look to be very busy as the market gathers pace this month.

We know they are pushing for a blockbuster mid-season deal for Serbian marksman Dusan Vlahovic, though the latest reports suggest agreeing a fee with Fiorentina is likely to prove problematic.

According to The Independent, the Serie A club are demanding the majority of their €75million (just over £60m) asking price to be paid up front.

Arsenal, meanwhile, are said to want to structure what would be a club-record deal over a four-year period, but are being met with reluctance by Fiorentina.

Sky add that Arsenal will struggle to finance a deal for Vlahovic by the end of the month due to the size of the fee involved.