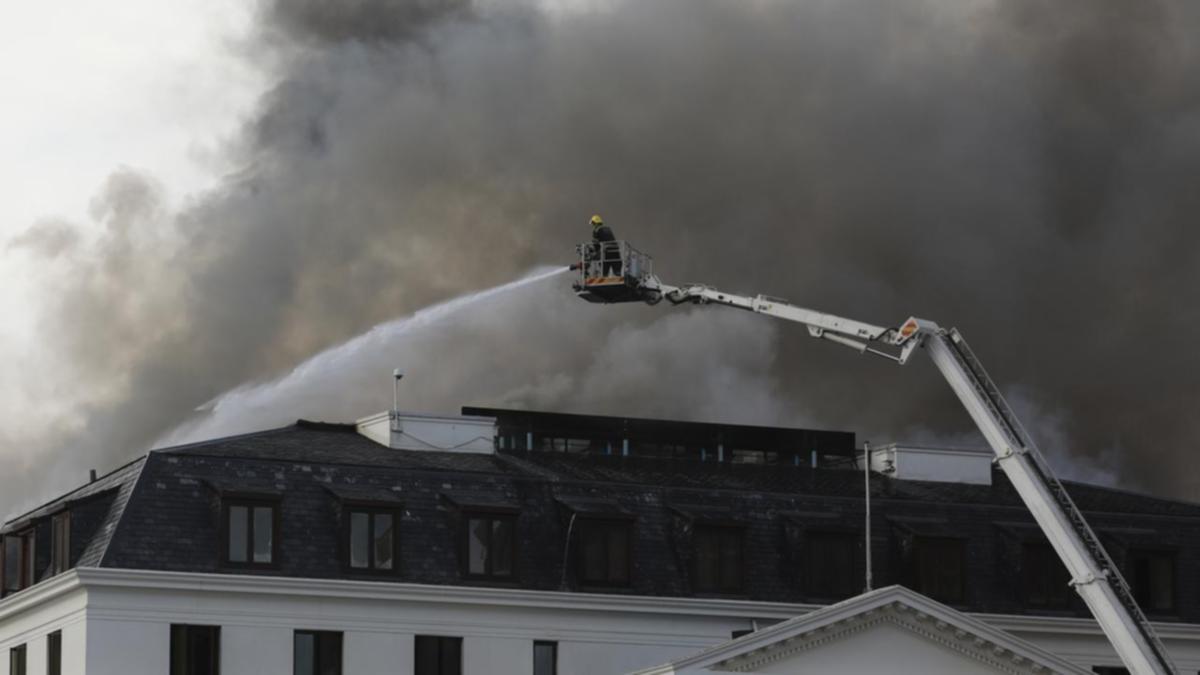 South African firefighters are struggling to extinguish a new blaze at the complex housing the two chambers of the country’s parliament in Cape Town, a day after a devastating fire swept through the buildings.

Police charged a 49-year-old man with arson and other offences including theft and he was expected to appear in court on Tuesday.

The Speaker of the National Assembly said arson, if confirmed, would represent an attack on the country’s democracy.

“The fire and rescue service confirms that the fire at parliament has flared up. The void beneath the roof sheeting of the National Assembly is on fire,” a spokesman for the city’s fire services said on Monday afternoon.

The roof of the Old Wing, which dates back to 1884 and houses the upper chamber National Council of Provinces (NCOP), also partially collapsed.

“It is a very abnormal kind of situation,” said Nosiviwe Mapisa-Nqakula, Speaker of the National Assembly.

“The question that even a young child would ask is: ‘How is it possible that fire which started in some part of the Old Assembly would find itself to the new chamber? We don’t know,” she told a news briefing.

In a separate statement, an elite police unit known as the Hawks said the suspect was believed to have gained entry to the parliament through a window in one of the offices and investigations were continuing into the matter.

“There is a possibility of other charges being added as there was a security breach here,” Hawks spokesperson Nomthandazo Mbambo told eNCA television.

Speaker Mapisa-Nqakula said President Cyril Ramaphosa’s address to parliament – currently set for February 10 – would still go ahead, lawmakers would still debate and approve the budget and committees would continue their work.

Earlier on Monday, before the flames flared up anew, firefighters had managed to extinguish most of the blaze and were just dealing with remaining “hotspots on the fourth floor of the National Assembly”.

“Lots of books and bookshelves (are) smouldering,” Jean-Pierre Smith, a Cape Town mayoral committee member responsible for safety and security said, adding that the interior of the National Assembly had been destroyed by fire, water and smoke.

A preliminary report on potential costs and timelines for refurbishment is expected on Friday, the public works and infrastructure minister said.