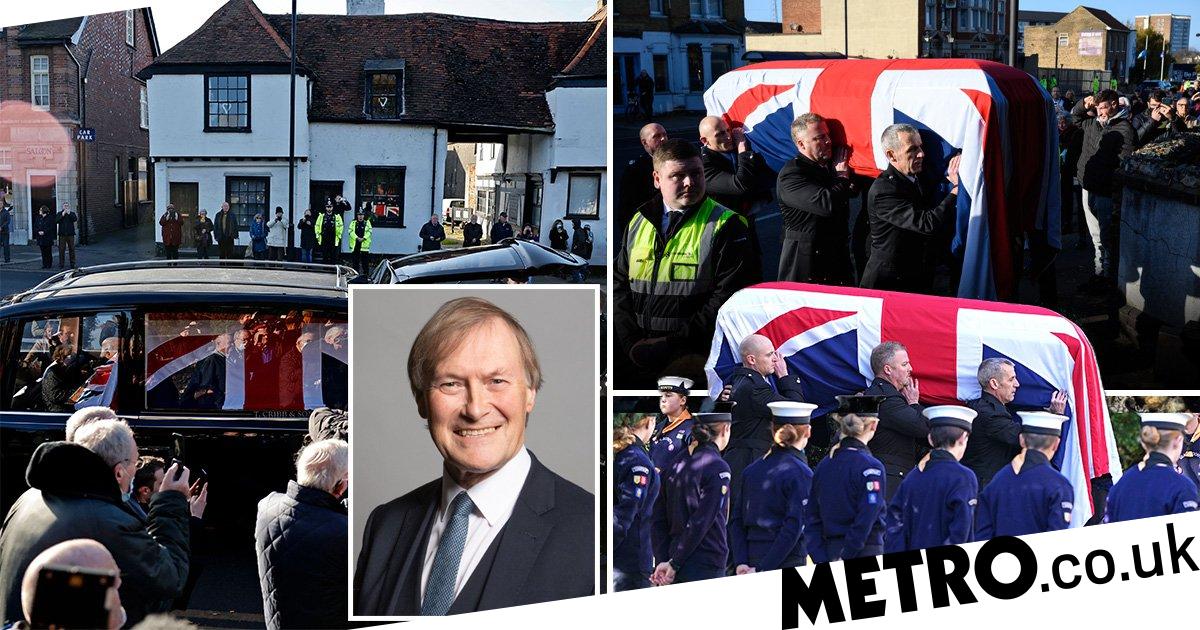 The family of Sir David Amess have laid bare their anguish over his ‘cruel and violent’ killing as they revealed: ‘We are absolutely broken.’

Grieving relatives told how their ‘hearts are shattered’ as they urged the public to ‘set aside hatred and work towards togetherness’ in the hope that ‘some good can come from this tragedy’.

Mourners gathered to bid a final farewell to Sir David at a funeral service in his beloved Southend West constituency on Monday afternoon.

He was stabbed to death while meeting with constituents at Belfairs Methodist Church on October 15, in a killing which left the nation in shock – as his family said: ‘Nobody should die in that way. Nobody.’

Sir David’s loved ones released a statement to be read at his funeral service by friend and former Conservative MP, Ann Widdecombe.

They have urged people to ‘set aside their differences and show kindness and love to all’.

And they vowed to ‘carry on’ in honour of Sir David – paying tribute to him as a ‘wonderful and inspiring man’.

‘This is the only way forward. Set aside hatred and work towards togetherness,’ the statement said.

‘Whatever one’s race, religious or political beliefs, be tolerant and try to understand. As a family, we are trying to understand why this awful thing has occurred.’

They added: ‘Please let some good come from this tragedy. We are absolutely broken, but we will survive and carry on for the sake of a wonderful and inspiring man.’

The family also expressed their gratitude to people for their ‘wonderful, wonderful’ tributes following the tragedy, saying in the statement: ‘It truly has brought us so much comfort.

‘The support shown by friends, constituents and the general public alike has been so overwhelming.

‘As a family, it has given us strength.

‘We have realised from tributes paid that there was far, far more to David than even we, those closest to him, knew.

‘We are enormously proud of him.’

Despite their grief, the family said ‘this is not the end of Sir David Amess MP’, but the ‘next chapter’ – as they asked people to support the many charities the veteran MP worked with.

The Queen approved plans to turn Southend-on-Sea into a city in memory of Sir David, Boris Johnson confirmed in October – to rapturous cheers from politicians on all sides of the Commons.

Paying tribute, the Prime Minister said Sir David ‘really cared’ about the issues he campaigned on.

During his eulogy, the Rayleigh and Wickford MP told mourners at St Mary’s Church in Prittlewell: ‘Our electors employ us to represent them in a contract renewable every few years.

‘We work for them and not the other way around, and no-one was ever more conscious of that than David Amess.

‘Whatever one thinks of members of Parliament, and opinions do vary, in my experience MPs of all parties do genuinely try and help other people.’

‘However, collectively in recent years we have perhaps not always helped ourselves, and I humbly suggest today that we need to learn from that.

‘But, boy, did David Amess honour the contract with his employers – and in his own inimitable style.’