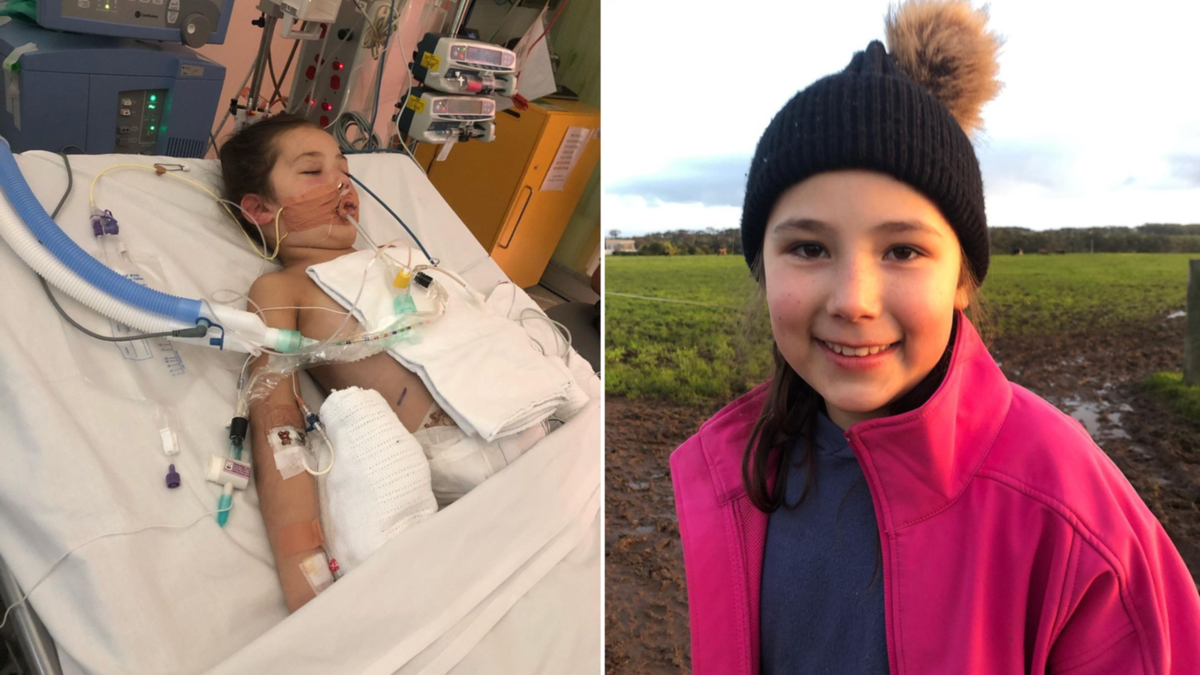 Watching her daughter’s chest rise and fall – with the help of machines – Natasha Wagner sat anxiously waiting for news of a liver that six-year-old Evie so desperately needed.

But when doctors came into the room announcing they had found a “match”, the mum was struck with fear.

WATCH THE VIDEO ABOVE: A stranger saved Evie’s life

“The one they found was from a man in his 40s who had died of an aggressive brain tumour,” Natasha tells 7Life.

“So Evie would have a one-in-1000 chance of getting the same tumour.”

However, without the organ transplant, specialists gave Evie just 24 to 48 hours to live.

Pray that another liver would be found for her little girl within a day – or go ahead with the transplant and hope a brain tumour never emerged.

The Melbourne mum chose the latter.

Growing up in the dark

Evie was born healthy, with “absolutely no indication she had anything remotely wrong”, the mum of seven explains.

And as she entered her first year of school, she was just a “normal” kid.

So when Natasha was invited to speak at a 10-day forum in India, she jumped at the chance, leaving her husband Erich to care for the kids.

But the moment she stepped foot off the plane after her 13-hour flight, her phone lit up.

“I told her to take Evie to hospital.”

While Natasha worked to get a flight home, Evie was admitted to hospital and doctors began running tests.

They discovered the little girl had an enlarged liver and began treating her with medication while trying to uncover the cause.

Laura’s daughter was fighting to survive. It took a life-changing decision to save her

Finally, after a circuitous five-day trek home, Natasha went straight to the hospital and ran to her daughter’s side.

Evie was fitted with a nasogastric tube, which pumped nutrients and medication directly into her stomach.

With her oxygen levels too low, she was ventilated and transferred into the ICU.

“No one wants to see their loved ones with tubes and wires coming out of everywhere,” Natasha says.

From a liver biopsy and genetic testing, doctors worked around the clock to find a reason for Evie’s continuing deterioration.

With a collapsed lung, her skin turned bright yellow overnight.

“Her tummy just grew and grew, the bottoms of her feet and her eyes they were so yellow – she looked like an Oompa Loompa from Charlie and the Chocolate Factory,” the mum describes.

Desperate to try to soothe her daughter’s suffering, Natasha turned to alternate methods.

“Honestly .. I don’t know how I functioned on a daily basis,” she says.

“I hired a healer who put crystals on her stomach.”

Unable to eat or move, Evie’s arms were stretched above her head to allow her lungs to inflate.

As Natasha watched on helplessly, doctors revealed that her little girl now needed a liver transplant.

Just as the mum started to process the news, the transplant team revealed they had found a donor.

The man was in his 40s and had died from an aggressive brain tumour.

Sitting the mum down, the transplant team explained that, if she were to accept the liver, Evie would have a one-in-1000 chance of contracting the same disease that took the donor’s life.

“I just had all of these questions, could we even reject it, could she wait for another one?”

The parents turned to their niece, a doctor, for advice.

After her parents agreed to the transplant, Evie was quickly taken into surgery – and for 12 agonising hours, Natasha waited for news.

“I was just sitting there watching people walk past, thinking how lucky we are,” she says.

“How lucky we are that, if the surgery is a success, Evie will go on to live a normal full life.”

Natasha’s positivity was met with great news, as the transplant was declared successful.

Evie received a split liver, meaning half the donor’s liver went to her and the other half to another individual in need.

The six-year-old spent three days in an induced coma to allow her body to recover.

Meanwhile, doctors revealed they finally found the cause of her liver failure – Wilson’s disease.

The rare genetic disorder is a result of a build up of excess copper.

“The surgeon came in after we had been on the ward for about eight days,” Natasha says.

“He basically said Evie had been on death’s door and how lucky she was because she had 24-48 hours left to live.”

Evie continued to excel and was discharged from hospital shortly after.

It’s now two years since the transplant and the young girl is happy and healthy.

She takes just one daily dose of anti-rejection medication and still has checkups with her GP.

And thankfully, there are no signs of any brain tumour.

Her mum will always be grateful for the stranger who gave her daughter life.

“It is just the most selfless gift,” Natasha says.

“I will never be able to say thank you to Evie’s donor but every day I think about him.

“If there wasn’t a donor at that exact time I wouldn’t have my little girl right now.”

Looking back at Evie’s time fighting for life in hospital, Natasha thinks of the friendships she made with other parents of children who received organ transplants.

But she confesses, her mind is with those kids who died waiting.

“Every day people die waiting for an organ – there is a lot of fear around organ donation and there really doesn’t need to be.”

Information on organ donation can be found via the Australian Government Organ and Tissue Authority.

The authority says it takes just one minute to register as an organ donor – and that up to seven lives can be saved from a single person.

Baby Riley teetered on the brink of death. Then a ‘hero’ stranger’s act changed everything