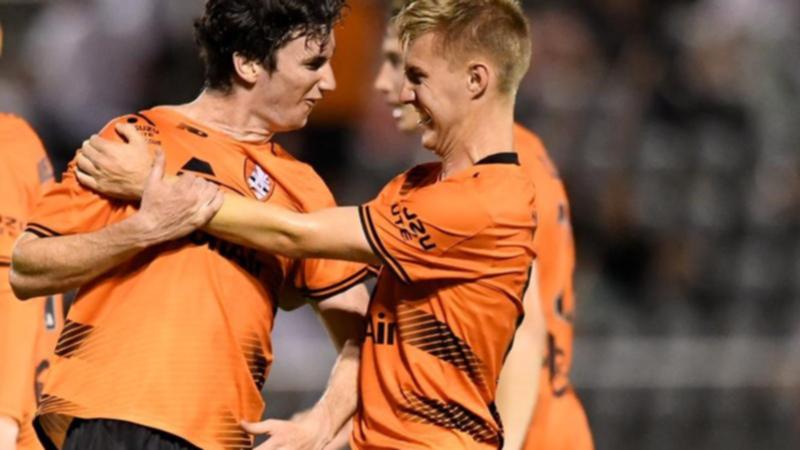 A first A-League Men’s goal to Brisbane attacker Henry Hore has secured the Roar their first win of the season with a 1-0 victory over Perth Glory.

Hore poked home from close range in the 77th minute to break the resistance of a resolute Glory at Moreton Daily Stadium, as Perth ended a 42-day wait between matches due to COVID-19 issues.

Despite the presence of ex-Liverpool star Daniel Sturridge, who came off the bench in the second-half for the second appearance of his ALM stint, Richard Garcia’s men were unable to find an equaliser.

Brisbane deserved the points after creating the lion’s share of chances, notching 13 shots to two in a dominant first-half display.

Winless after five matches, Brisbane nearly made the perfect start when Jay O’Shea broke into the box in the opening minute but the Roar captain’s shot was palmed away by Glory keeper Cameron Cook before Alex Parsons took an airswing on the follow-up.

Forwards Juan Lescano and Nikola Mileusnic were unable to finish half-chances before the Glory got their first shot on target in the 37th minute when Bruno Fornaroli hit a long-range effort straight at Roar goalkeeper Macklin Freke.

O’Shea came closest to scoring when Cook mis-kicked a clearance, the Irishman pouncing on the loose ball and curling an effort towards goal but Glory defender Jonathan Aspropotamitis headed the ball clear from under the crossbar on the goalline.

The home team’s tensions boiled over just before the break when coach Warren Moon reacted angrily to referee Alireza Faghani’s decision to award a free-kick against Scott Neville for a challenge on Fornaroli.

Moon and Neville were both booked by Faghani as the teams went into the break goalless.

Sturridge came on in the 67th minute but it was Roar substitute Hore who made the telling contribution 10 minutes later.

Parsons’ corner was nodded back across goal by former Glory player Scott Neville where 22-year-old Hore pounced to get to the ball before Cook could claim it and finish from close range.

Former England international Sturridge had his moment to equalise just three minutes later but his left-foot free-kick from the edge of the area swung agonisingly past the post for the visitors.

Brisbane should have wrapped up the game when Parsons had an empty net in the 89th minute but the Roar youngster somehow contrived to slam his effort against the crossbar.

His miss didn’t prove costly as the hosts lifted themselves off the bottom of the ladder.

Brisbane are back at home on Sunday against Adelaide, while the Glory travel to face Sydney FC on Saturday.