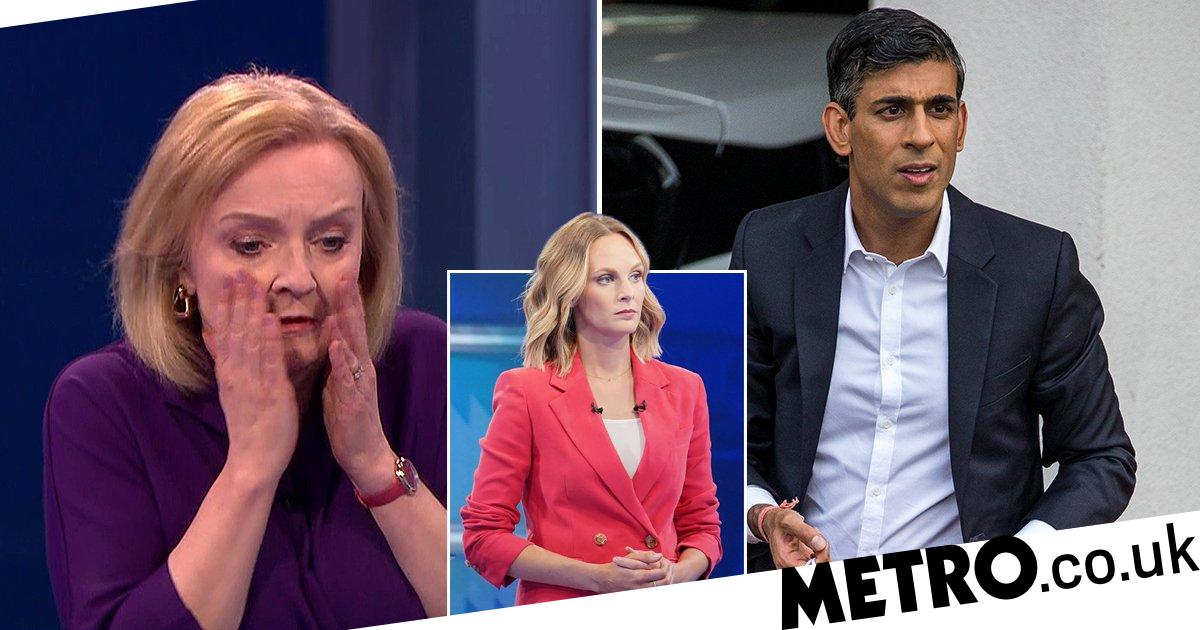 Rishi Sunak and Liz Truss rushed over to Kate McCann after she collapsed in the studio while live on air.

Yesterday’s head-to-head TalkTV debate between the two Tory leadership hopefuls dramatically came to a halt after the host fainted off-camera.

Both contenders checked on the presenter during the medical emergency.

According to eyewitnesses cited by The Sun, they were kneeling down next to Ms McCann, with Ms Sunak seen ‘holding her hand’.

Ms Truss tweeted after the debate: ‘Relieved to hear Kate McCann is fine.

‘Really sorry that such a good debate had to end.’

The foreign secretary was in the middle of a sentence when Ms McCann collapsed and appeared to say ‘oh my god’ before the broadcast was cut short.

‘It was a great debate and I look forward to getting grilled by you again shortly.’

At the time, the two politicians were debating funding for the NHS and tax cuts.

Mr Sunak announced he would scrap VAT on all domestic energy bills for the next year, saving the average household £160, if he becomes PM.

The move is part of his ‘winter plan’ to tackle inflation and the cost of living crisis.

On top of scrapping VAT on all domestic energy bills, he would also undertake major supply side reforms aimed at bringing down costs.

Mr Sunak said: ‘Tackling inflation and getting people the support they need to help with the cost of living is critical.

‘That’s why, with the price cap expected to rise above £3,000 in October, I will move immediately to scrap VAT on everyone’s domestic energy bills for the next year, saving the average household £160.

‘This temporary and targeted tax cut will get people the support they need whilst also – critically – bearing down on price pressures.’

‘His tax hikes alone have cost families four times as much as this measly plan would ever save them,’ she stressed.

‘It is proof that both Sunak and Truss are out of touch and out of ideas.

‘All they can offer is half-baked policies which won’t save people from the frankly frightening rise in energy bills this winter.’

Shadow Treasury minister Pat McFadden also did not hold back, urging ‘the real Rishi Sunak’ to please stand up.

He said: ‘Once again he’s acting as his own personal rebuttal unit – attacking a policy for months then adopting it.

‘Not content with playing hokey cokey with our taxes as chancellor, he’s devised a poor imitation of the windfall tax Labour called for, and now he wants to cut VAT on energy bills.’