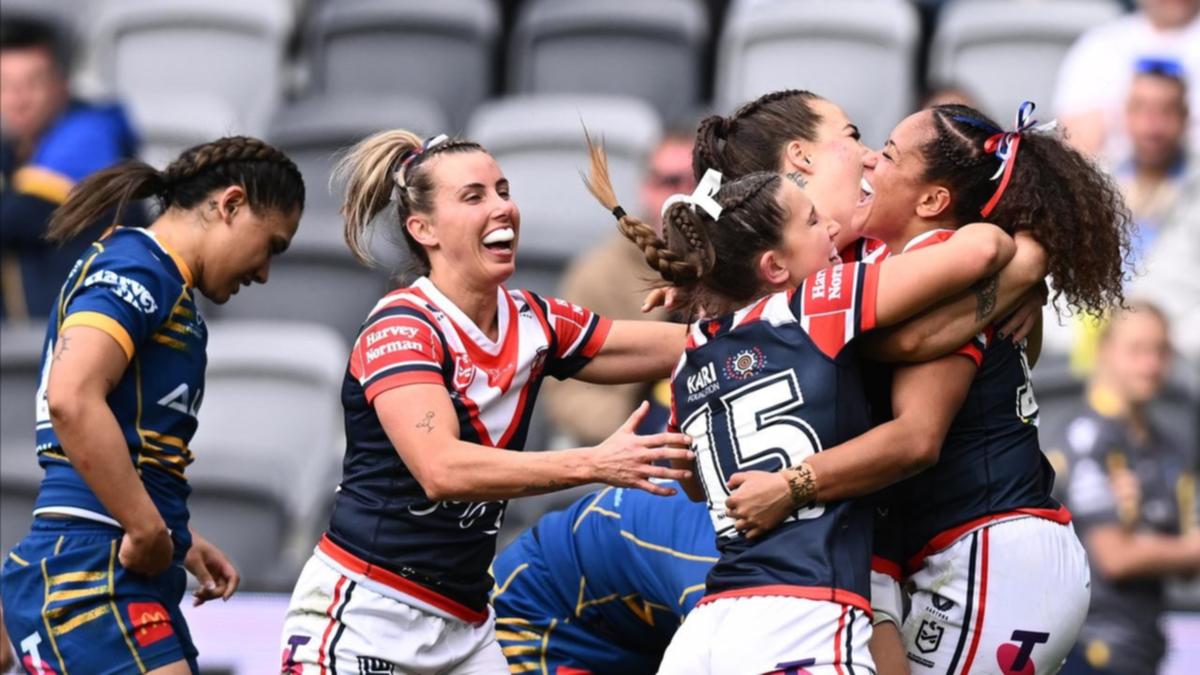 Newly crowned Roosters captain Isabelle Kelly nabbed her first NRLW double to get her team’s premiership defence off to a flying start with a 38-16 win over Parramatta at CommBank Stadium.

The Roosters never let go of the lead, scoring four tries in the first half and another three in the second.

They were ably led by new skipper Kelly whose points early in the first half set up the Roosters win.

The free-spirited scoring had commentators diving for the record books to find out if the Roosters haul was the highest in NRLW history.

But in the end they fell two short of the Dragons 40-4 drubbing of the Knights in 2021.

The game was eye-catching in other ways apart from the avalanche of points.

Parramatta’s New Zealand Sevens star Gayle Broughton made her rugby league debut at fullback, while the first AFLW convert Brooke Walker took on the goal-kicking duties for the Eels after kicking 14 goals for Carlton in the past four AFLW seasons.

Former Jillaroo fullback Sam Bremner was making her return to the NRLW – this time in Roosters colours – after a two-year absence to have a second child.

After two sparkling runs by Bremner and prop Sarah Togatuk, it was a third Roosters NSW Origin player in Kelly to put winger Jayme Fressard over on the left corner for first points,with the match only seven minutes old.

Three minutes later and Kelly did it all herself in a 30-metre run, fending off Eels centre Abbi Church and dragging fullback Gayle Broughton over the line.

After scoring on the left it was Kelly again – but this time on the right – combining with Bremner to get her double for the afternoon, in the space of three minutes.

But the 12-0 lead off the back of 64 per cent possession seemed to put the Roosters in a handy position.

Momentum swung the Eels way with hooker Seli Mailangi barging over from dummy-half, before Simaima Taufa again pushed through flimsy defence after picking up a loose ball close to the lines.

Scores were locked up 12-12 as half-time approached.

But Bremner once again injected herself with a darting run before off-loading to Jess Sergis.

The 2019 Dally M winner hit the defensive line at speed, spun around and over for the Roosters fourth try.

It gave the visitors the lead 18-12 as the hooter sounded.

It was a see-sawing start to the second half, when former Roosters player Vanessa Foliaki celebrated her 29th birthday with a try for the Eels, before Olivia Kernick’s angled run kept the Roosters in front 24-16.

But Roosters tries to back-rower Shaniah Power, a second to Fressard, and then right-side winger Leianne Tufuga put the result beyond doubt.