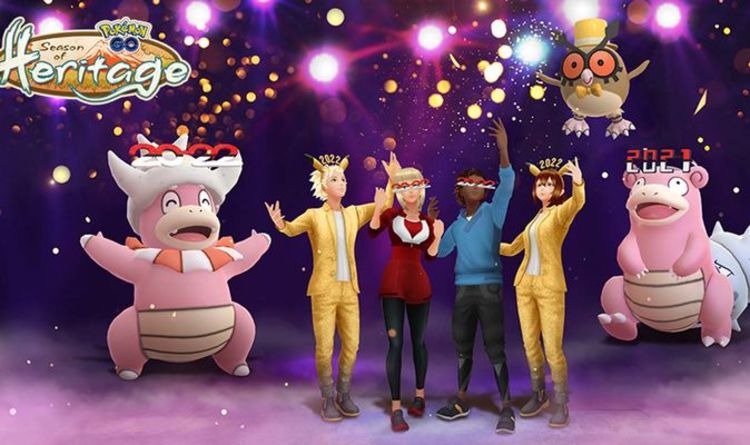 During the event players will be able to grab some event bonuses – which are two hatch dust, two hatch candy and half hatch distance.

The most in-demand encounter will surely be the Shiny Hoothoot, which is appearing in Pokemon Go for the first time.

You’ll also see costumed Pokemon appear during the New Years Event, with the likes of Charmander, Bulbasaur, Pikachu, Squirtle and others wearing a special party hats.

Announcing the Pokemon Go New Years event, Niantic said: “Trainers, Happy 2020 from Slowpoke! Wait, no—it’s about to be 2022! Why is Slowpoke still wearing those glasses? At least Slowking got the memo! That’s right—our New Year’s celebration event is right around the corner! Look forward to Pokemon wearing new costumes, themed avatar items, the return of some familiar Pokemon wearing party hats, and a certain Shiny Pokemon will be appearing for the first time in Pokemon GO.”

Explaining what’s in store, Niantic added: “Following the gift exchange, Spark decides to throw a party to celebrate and bring in the New Year!

“Nearby Pokemon are intrigued by the festivities and drawn in to celebrate!”

The five-star raid is Kyurem while the mega raid is Mega Abomasnow.

There will also be special avatar items and stickers on offer during the event.

These cosmetics are as follows…