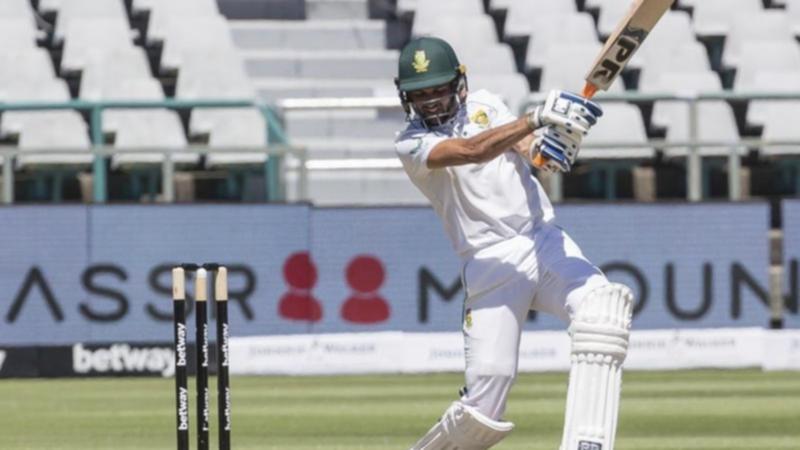 Keegan Petersen showed his battling qualities with an unbeaten 70 to help South Africa limp to 7-176 at tea as India kept chipping away at the wickets on the second day of the decisive third and final test at Newlands.

South Africa still trail India’s first innings score by 47 runs on a wicket that is favouring the seam bowlers, making Petersen’s lone hand on Wednesday all the more impressive in the wake of the visitors’ potent bowling attack.

He will resume after the interval with Kagiso Rabada after Marco Jansen (7) was bowled by the impressive Jasprit Bumrah (3-29) on the stroke of tea.

The home side will be hoping for any sort of first innings lead that could be precious as they bat last on the wearing wicket, which will not get any easier for the batsmen.

The home side resumed the session on 3-100 but lost Rassie van der Dussen (21) after he had put on 67 for the fourth wicket with Petersen. He was caught by Virat Kohli off Umesh Yadav (2-50).

In-form Temba Bavuma played a bright innings of 28 but was another catch for Kohli at second slip, this time off the bowling of Mohammed Shami (2-39).

Shami then bagged a second wicket in three balls when Kyle Verreynne edged to wicketkeeper Rishabh Pant for a duck.

The Indian seamers had regularly beaten the bat in the morning session and when they did find the edge, the ball fell agonisingly short of the slips on numerous occasions.

They seemed to step up a few paces after lunch, though all the catches were taken very low down.

The series is level at 1-1 after India won the first Test before South Africa bounced back to claim the second.