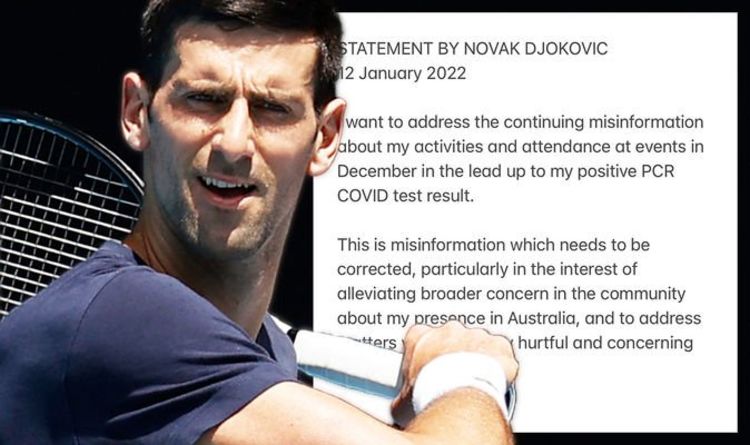 Novak Djokovic has admitted to breaking Covid rules aftertesting positive last month. During the world No 1’s appeal over his visa cancellation in Australia, documents submitted by his lawyers showed he took a PCR test on December 16 and received confirmation of a positive result that same day. He then attended a children’s tennis event in Belgrate on December 17 and an interview with L’Equipe on December 18.

The timing of Djokovic’s positive result caused uproar as it emerged he had continue to make public appearances, including at a children’s tennis event where he presented awards to the youngsters, in the days after his positive result.

The 20-time Grand Slam champion has now addressed the matter for the first time, and admitted to breaking Covid isolation rules by competing an interview with L’Equipe on December 18.

“I want to address the continuing misinformation about my activities and attendance at events in December in the lead up to my positive PCR Covid test result,” he wrote in a statement posted to his Instagram account

“This is misinformation which needs to be corrected, particularly in the interest of alleviating broader concern in the community about my presence in Australia, and to address matters which are very hurtful and concerning to my family.

“I want to emphasise that I have tried very hard to ensure the safety of everyone and my compliance with testing obligations.”

Explaining the timing of his positive Covid test, the 34-year-old continued: “I attended a basketball game in Belgrade on Dec 14 after which it was reported that a number of people tested positive with Covid. Despite having no Covid symptoms, I took a rapid antigen test on Dec 16 which was negative, and out of an abundance of caution, also took an official and approved PCR test on that same day.”

The world No 1 also claimed he did not receive notification of a positive result until after the children’s tennis event on December 17, contradicting the sworn court affidavit showing he received the result on the evening of December 16.

“The next day I attended a tennis event in Belgrade to present awards to children and took a rapid antigen test before going to the event, and it was negative,” he said.

“I was asymptomatic and felt good, and I had not received the notification of a positive PCR test result until after that event.

“I felt obliged to go ahead and conduct the L’Equipe interview as I didn’t want to let the journalist down, but I did ensure I socially distanced and wore a mask except when my photograph was being taken.”

Admitting to breaking Covid rules, Djokovic added: “While I went home after the interview to isolate for the required period, on reflection, this was an error of judgement and I accept that I should have reschedule this commitment.”

Djokovic, whose Australian visa can still be cancelled for a second time by Immigration Minister Alex Hawke, also landed himself in hot water after it emerged that the federal government were investigating whether he lied on his Australian Travel Declaration form.

Sources confirmed the government were looking into a discrepancy on the form, on which Djokovic said he had not travelled in the 14 days prior to arriving in Australia on January 6, despite travelling from his home of Serbia to Spain in this period when he spent Christmas at home and was then seen in Cadiz, Spain on December 31.

On the form, all travellers are asked whether they have “travelled or will travel in the 14 days prior to your flight to Australia”, and are warned that “giving false or misleading information is a serious offence. You may also be liable to a civil penalty for giving false or misleading information”, with a maximum penalty of 12 months imprisonment.

Djokovic confirmed that he did not personally fill in the form and called the discrepancy a matter of “human error”.

“On the issue of my travel declaration, this was submitted by my support team on my behalf – as I told immigration officials on my arrival – and my agent sincerely apologises for the administrative mistake in ticking the incorrect box about my previous travel before coming to Australia,” he said.

“This was a human error and certainly not deliberate. We are living in challenging times in a global pandemic and sometimes these mistakes can occur. Today, my team has provided additional information to the Australian Government to clarify this matter.

“While I felt it was important to address and clarify misinformation I will not be making any further comment out of utmost respect for the Australian Government and their authorities and the current process.

“It is always an honour and a privilege to play in the Australian Open. The Australian Open is much-loved by players. Fans and the community, not just in Victoria and in Australia, but around the globe, and I just want to have the opportunity to compete against the best players in the world and perform before one of the best crowds in the world.”