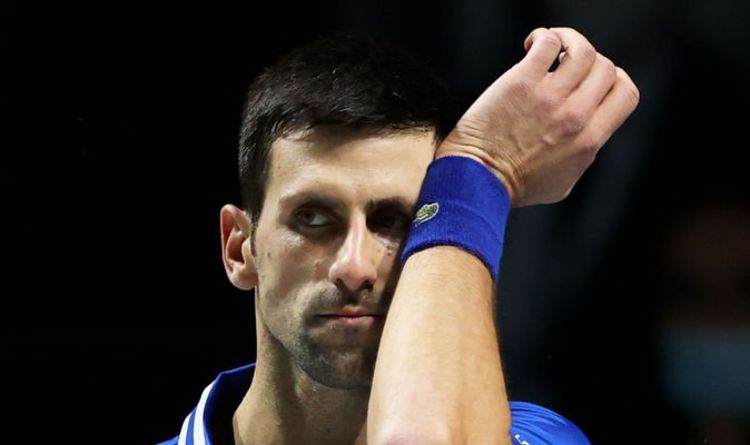 Tennis sensation Novak Djokovic could be arrested on court by armed officers if Australian officials decide to cancel the 34-year-old’s visa this week. Despite a judge ordering his release on Monday, the government maintains the power to re-detain the Serbian as new details come to light over his attempts to enter the country.

Despite being let free on Monday, controversy remains over pictures showing the star out in public after testing positive for Covid in December.

Djokovic himself admitted to being aware of his positive test when attending an interview in the days following.

The 20-time Grand Slam champion has criticised mandated vaccines in the past, and revealed to Australian officials that he is unvaccinated.

However, a medical vaccine exemption, granted to him by two separate medical panels, looked set to allow him entry into the country ahead of this month’s Grand Slam.

Djokovic was promptly back on court practicing after several days in a Melbourne detention centre, but he is unable to rest up just yet as multiple sources claim that the saga may not be over.

Abul Rizvi, a former Immigration Department Deputy Secretary, now claims that Djokovic could be dramatically detained on the tennis court if officials reverse their decision.

“The cancellation notice [would be] taken by Australian Border Force who usually dress in very, very dark uniforms and often carry guns turning up to Mr Djokovic’s hotel or on the tennis court,” he told Channel 10’s The Project.

“Taking Mr Djokovic away from the tennis court, most probably in the glare of the world’s media to a detention centre where Mr Djokovic would remain whilst he sought any application for judicial or other review processes.

“There is no easy option here. Cancellation is difficult and not cancelling is difficult.”

Djokovic facing further action seems to be a growing possibility, with serious questions remaining about his entry into Australia.

Border officials are exploring whether Djokovic made false claims on his travel declaration over whether he visited other countries in the two weeks prior to landing in Australia.

Djokovic supposedly claimed that he had not, although he was pictured in Serbia and Spain in the final days of 2021.

Knowingly putting false information on visa forms is, according to the Home Affairs Department, a ‘serious offence’ which could carry a jail term.

‘If convicted, the maximum penalty is imprisonment for 12 months,’ it adds on their website.

Djokovic’s parents, meanwhile, have called for people to protect their son’s human rights amid the threat of deportation.

The Serb has won the Australian Open on nine prior occasions, and is aiming to pull clear of Rafael Nadal and Roger Federer, with the famed ‘Big Three’ on 20 Grand Slam titles apiece.