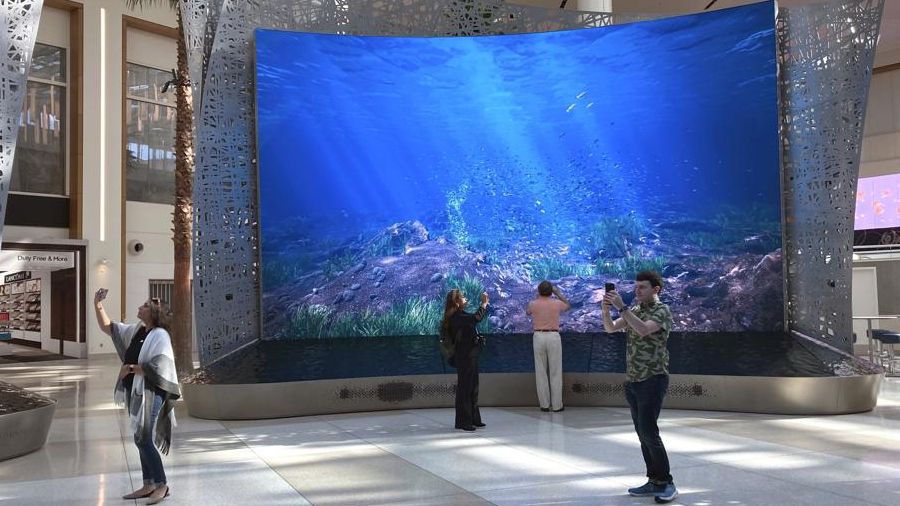 ORLANDO, Fla. (AP) — Visitors to the new terminal at Orlando International Airport may want to wear sunscreen, shades and a floppy hat.

Sun rays beaming through the windows of its soaring ceilings don’t just peck at the passing passengers — they practically smooch them as if they were spending a day at the beach.

Accompanied by realistic-looking fake indoor palm trees, gigantic LED screens depicting underwater springs and skylight views of blue skies and billowing clouds, Terminal C lets passengers know they have arrived in Florida. And that’s the point, as the world’s seventh-busiest airport makes a $2.8 billion bet when the 1.8 million-square-foot (167,225-square-meter) terminal opens to the public Tuesday that Florida’s tourism is moving well beyond the COVID-19 pandemic slowdown and has a bright future.

“They get to see the sunshine so they really know they are in the Sunshine State,” Kevin Thibault, CEO of the Greater Orlando Aviation Authority, said of passengers arriving in the terminal. “It really is a facility for generations to come.”

With 40.3 million passengers last year, Orlando International Airport was the busiest airport in Florida, according to Airports Council International. However, that figure was still a fifth below the number of passengers in 2019 before the coronavirus pandemic. For 2022, the airport had a rolling 12-month total at the end of June of 47 million passengers, just shy of the 50.6 million who came in 2019.

The addition of Terminal C gives the airport the ability to handle 12 million more passengers at the terminal’s 15 new gates in a first phase, increasing the airport’s capacity by a quarter. Airport officials say it will ease some of the crowding that had grown in the decade before the start of the pandemic at the airport’s other two terminals as Central Florida became the most visited destination in the United States.

The Orlando area had 59.3 million visitors last year, up two-thirds from 35.3 million in 2020, when Central Florida’s theme parks shut down for several months and international travel was limited in an attempt to stop the virus’ spread. However, last year’s Orlando area visitor numbers still fell short of the pre-pandemic high of 75.8 million in 2019.

Like Orlando, the state of Florida this year is on pace to match its pre-pandemic tourism figures now that restrictions on international travel have been lifted. Florida had 122 million visitors last year, still short of the 131 million in 2019. But the first two quarters of this year put Florida’s 2022 visitor numbers on pace to match those from three years ago.

Officials at Orlando International Airport said the new terminal is one of the most technologically advanced in the U.S.

Suitcases and other baggage at Terminal C will be deposited in large, chip-embedded tubs that are tracked through radio frequency technology. The tubs reduce opportunities for wheels or straps to cause jams in the maze of conveyor belts that move luggage, and the system allows bags to always be tracked. The goal at the Orlando airport, which gets the most strollers and golf clubs of any in the U.S., is to move bags from a gate to the baggage carousel within five minutes, airport officials said.

“We don’t have to track the bag anymore. We are tracking the transport device,” said Scott Goodwin, assistant director of airport operations.

Passengers on international flights who have opted in can match their passport photos with facial scans at departure gates, speeding up the boarding process. At security checkpoints leading to gates, passengers will be able to place their carry-on bags in bins on automated conveyor belts rather than pushing them along tables until they reach the X-ray machines, speeding up the screening process by allowing travelers to bypass slowpokes in line.

“You can move ahead, grab a bin and you won’t seem impolite to anyone,” said Sari Koshetz, a spokeswoman for the Transportation Security Administration.

Thibault said Orlando International Airport officials currently are in conversations about having seamless ticketing between Brightline and the terminal’s airlines, which include Aer Lingus, British Airways, Emirates, JetBlue and Lufthansa.

More than 90% of the terminal’s restaurants and stores, which include mandatory shops from Walt Disney World, Universal Orlando Resort and SeaWorld Orlando, are past security checkpoints in an effort to give departing passengers time to shop and eat once they are past security screening.

Arriving passengers will be flooded by sunlight since they will be on the upper-most level of skylighted Terminal C, a flip from the traditional design of having arrivals on the lower level and departures on the upper level.

“We want them to feel the sunshine. We want them to feel them palm trees, the flora and fauna,” said Curtis Fentress, whose firm was the terminal’s design architect. “It brings light into the building in a way that sort of dapples, like the light that used to stream through the orange orchards, historically.”