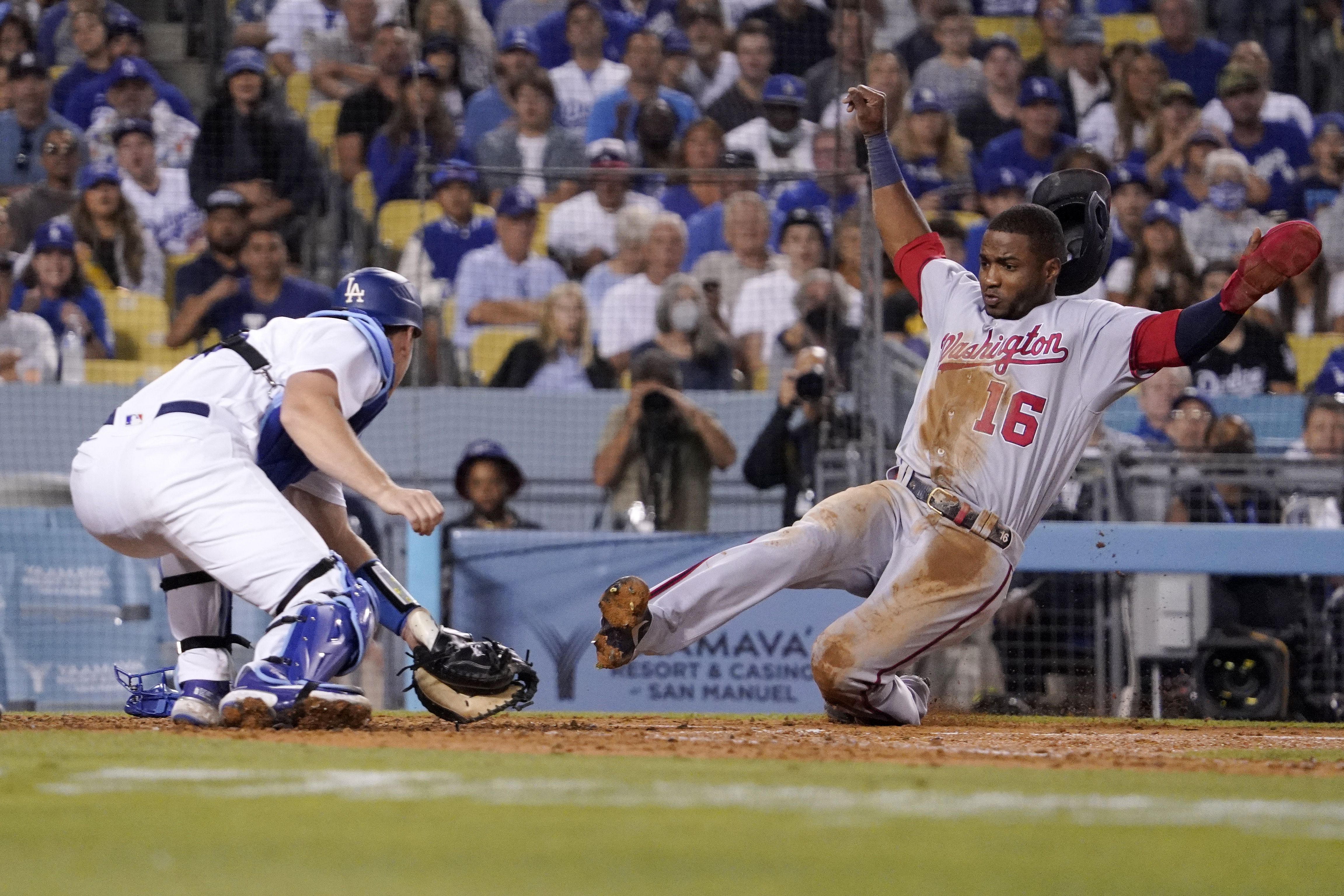 LOS ANGELES – Luis Garcia hit a two-run homer in the eighth inning and the last-place Washington Nationals rallied past the Los Angeles Dodgers 8-3 Tuesday night for their second straight win against the NL West leaders.

Garcia’s shot into the right-field seats with two outs against Los Angeles left-hander Garrett Cleavinger was his third home run of the season and brought home Josh Bell, who reached first on a throwing error by Dodgers second baseman Gavin Lux.

Washington scored four more times against Cleavinger in the ninth, improving their major league-worst record to 34-65. The Dodgers have baseball’s second best record at 64-32.

“They’re playing well right now and I’m proud of the guys,” Nationals manager Davey Martinez said of his club. “All year long we fell short but we don’t quit and I love that about them.”

Mookie Betts hit his team-leading 23rd home run and threw out a runner at home plate for the Dodgers. Cody Bellinger also went deep, and Freddie Freeman added an RBI on a sacrifice fly as all three Dodgers runs came from former MVPs.

Nationals starter Josiah Gray, who was traded from the Dodgers to the Nationals last season, held his former team to one run through four innings before Los Angeles surged into a 3-2 lead in the fifth on Bellinger’s homer and Freeman’s fly.

Washington’s Juan Soto, who has been the subject of trade rumors heading into next week’s deadline, went 0 for 4 and was hit by a pitch. He is 3 for 18 since winning the Home Run Derby during All-Star Game festivities last week at Dodger Stadium.

The Nationals got their offense on track early with first-inning RBIs from Bell and Yadiel Hernandez. Victor Robles and Cesar Hernandez led off the game with back-to-back singles, while Soto grounded out and Bell brought home Robles on a ground ball. Hernandez’s RBI single made it 2-0.

Gray held the Dodgers in check after he was torched for seven runs on five hits and three walks in a game May 24 against them at Washington. He gave up Betts’ homer to lead off the first inning but did not allow another run until the fifth.

Bellinger got the Dodgers even with a first-pitch home run to right field, his 13th of the season. Trayce Thompson and Trea Turner had singles to put runners on the corners with one out before Freeman’s sacrifice fly to center put the Dodgers up 3-2.

Betts threw out Robles at the plate for the final out of the fifth inning following Josh Bell’s single to right. Robles had three hits Tuesday and has four hits since moving into the leadoff spot Monday.

“My approach is always the same: Try to get on base any way I can to help the team win,” Robles said through an interpreter. “It’s just confidence. I’m just trying to get my confidence back and that has given me good results.”

Dodgers starter Mitch White White was effective outside of the opening inning, giving up two runs on nine hits over six innings with no walks and four strikeouts. It was the second most hits he allowed in his 10 starts this season.

Gray, who was part of the trade that brought Turner and Max Scherzer to Los Angeles last season, gave up three runs on five hits over five innings with two walks and six strikeouts.

“(Gray) fell behind a lot today on hitters but he kept battling back,” Martinez said. “For him to go out there and give us a strong outing like that — his pitch count got up there a little bit — but he gave us everything he had and we’ll talk to him tomorrow about working ahead.”

Nationals right-hander Erasmo Hernandez (2-1) recorded two outs in the seventh inning to earn the victory. Washington has earned victories in the first two games of the series after the Dodgers did the same to the Nationals in a three-game series on the East Coast in May.

“I really thought it was a good lane for Garrett, it just didn’t work out,” said Roberts, who was staying away from left-handers Alex Vesia, Caleb Ferguson and David Price because of recent heavy use. “I really felt good about that part of the game.”

The Nationals scored in the ninth inning on Bell’s sacrifice fly, a two-run double from Nelson Cruz and an RBI single from former Dodger Keibert Ruiz, who was also a part of the Turner-Scherzer trade.

“We had some opportunities to break through and put together an inning and we didn’t” Roberts said.

Nationals: RHP Reed Garrett (biceps), currently on a minor league rehab assignment, won’t be re-assessed until Friday at the earliest when the Nationals open a three-game homestand against the St. Louis Cardinals. … RHP Will Harris (pectoral), who has made just eight appearances since 2020, started a rehab assignment at Class A Fredericksburg.

Dodgers: INF/OF Chris Taylor, who has been out since July 4 with a broken left foot, is nearing a rehab assignment. While he exclusively played the outfield this season, manager Dave Roberts said some second base could be in the plan when he returns. … 3B Justin Turner, who hasn’t played since Thursday with a rib-cage strain, is scheduled to return to the starting lineup Wednesday. … RHP Blake Treinen (shoulder) threw a bullpen session, but his return to the active roster could be pushed back to September.

Dodgers: LHP Andrew Heaney (1-0, 0.59) will come off his second IL stint to make the start with just three prior outings this season.