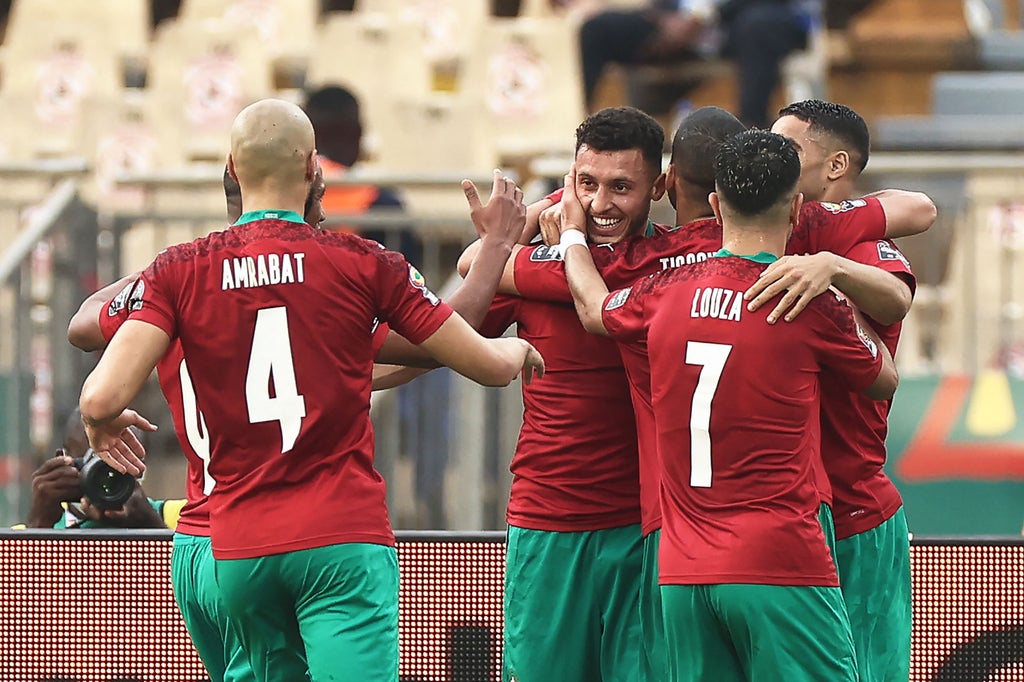 The Africa Cup of Nations group stage is in full swing and we’re off to Group C this afternoon as Morocco and Comoros continue their campaigns.

The tiny island nation of Comoros, ranked No132 in the world by Fifa, are making their first ever appearance at the AFCON but gave Gabon a real scare in their opening game, eventually going down 1-0.

Morocco, meanwhile, began the group stage with a heavyweight clash against Ghana but prevailed as 1-0 winners thanks to a late strike from former Southampton man Soufiane Boufal.

That result means Vahid Halilhodžić have chance to book their place in the last-16 with a game to spare, while victory would also go a long way to securing top spot in the group and – in theory – a more favourable knockout stage draw.

Zakaria Aboukhlal finally slides the ball past Ben Boina but the flag is raised. Looks a tight one to me though…

Ben Boina’s sensational afternoon continues as he denies En-Nesyri from the spot.

Fayçal Fajr gets a toe to it ahead of Ben Boina and as they collide the referee has little choice but to point to the spot.

77 mins: Nothing wrong with the effort this time. Achraf Hakimi arcs a long range free-kick over the wall but Ben Boina scrambles across to palm round the post.

72 mins: Another one comes and goes. This time it’s ridiculous from Comoros trying to play out from the back and Amallah has plenty of goal to aim at from the edge of the box but fires wide of the near post.

71 mins: Well, we’re into the final twenty minutes and if Morocco don’t take all three points here they’ll have only themselves to blame.

65 mins: A triple change for Morocco as they try to put this one to bed. Most pleasing is the arrival of Sevilla striker Youssef En-Nesyri – linked with both West Ham and Arsenal – who has been struggling with an injury coming into the tournament.

El Kaabi with the diving header six yards out this time but it comes off the top of his head and flies well wide of the far corner.

56 mins: I’m not sure how it’s staying out at the moment. Tissoudali drives one pretty much across the goalline and wide of the far post before a cross deflects off El Kaabi and towards the goal from six yards but the ‘keeper manages to punt clear acrobatically.

52 mins: He’s been right in the wars, Selemani. He took that clattering from Hakimi at the end of the first half and now he’s in the wall to take Boufal’s free-kick square in the face.