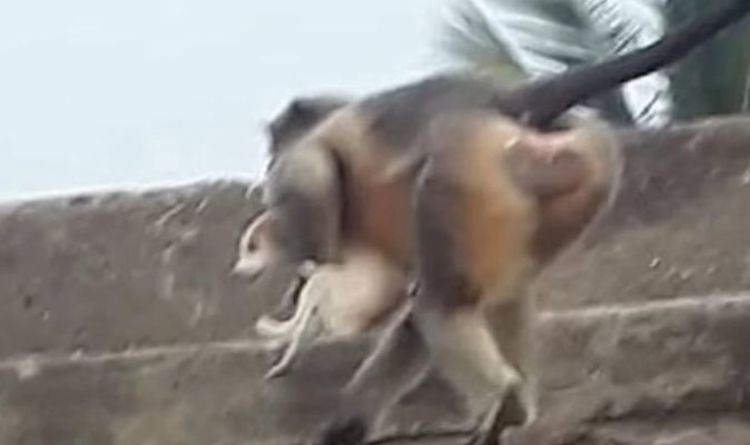 Over the past month, the villages of Majalgaon and Lavool in Maharashtra, India, have witnessed increasing violence from local monkeys towards dogs. According to local reports, as many as 250 dogs have been killed by the primates who would drag them to the top of trees and buildings and then throw them to their deaths.

One shocking picture shows a monkey carrying a puppy to the edge of a building, ready to throw it to the ground.

Video footage shared by thousands online showed chases between dogs and primates in the streets and local people visibly frightened by the fights.

The reason behind so much violence is reportedly revenge.

It was reported a pack of dogs mauled a baby monkey to death which started the war between the two local species.

Dogs aren’t the only victims of the monkey pack, as an eight-year-old child is said to have been dragged away by the monkey.

The child was only saved when villagers launched stones at the animals.

Those who tried to save the dogs have also suffered injuries.

Some men even fell from heights themselves when trying to save dogs that had been dragged there.

According to Stephanie Poindexter, an assistant professor at SUNY Buffalo whose research focuses on primate behavioural ecology, said studies have shown that animals—primarily monkeys—can practice revenge.

She told Gizmodo: “We’ve seen that when an individual is attacked in some way, the likelihood of them attacking someone related to their aggressor is higher.

“Typically, there’s a preference for attacking a third-party associated with the original aggressor, as opposed to the actual aggressor.

“For the most part, these acts of ‘revenge’ take place shortly after the attack.”