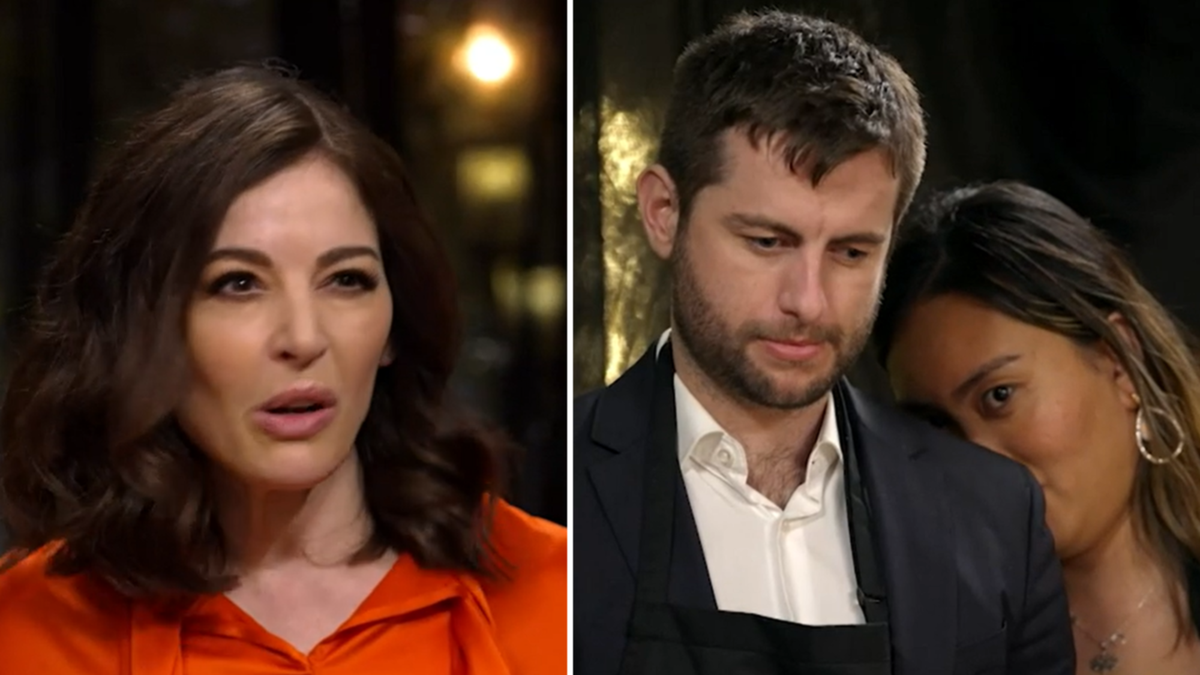 Newly engaged Steven and Frena from Adelaide plated up on MKR for judges Manu Feildel and Nigella Lawson on Tuesday night – and things did not go quite as expected.

The couple sailed smoothly through their first two courses but, when it came to their dessert, they felt a “sinking feeling” as their pudding failed to cook.

WATCH THE VIDEO ABOVE: Steven and Frena’s ‘heartbreak’ over failed dessert

The couple prepared calamari and black bean steak for their entree and main, which impressed the judges and their fellow contestants.

They appeared on a high as they headed back to the kitchen, ready to bring out their final course.

For their dessert, Steven and Frena had prepared a corn pudding with strawberries and chocolate sauce.

Manu later said that the “bells were ringing” when they chose to mix the traditional Malaysian dish of corn pudding with the modern elements of strawberries and chocolate.

Steven and Frena appeared heartbroken as they removed their pudding from the fridge and realised it had not set properly.

It appeared “watery” and, when plated, did not sit properly.

“We both had this sinking feeling in the pit of our stomachs, and there was no hope of changing it whatsoever.”

As the judges and other teams began to eat the dessert, comments could be heard from the table.

Meanwhile, Alice said she “feels horrible, I can’t eat it”.

Frena and Steven re-entered the room to hear the verdict before Manu began his feedback.

“It’s a question of trying to reinvent the wheel – that doesn’t work, to put fresh fruit in a pudding. I could have told you that wouldn’t be working for strawberries,” he said.

Nigella said she had had “amazing corn pudding” in the past but the couple “changed it”.

“And I find that heartbreaking,” the much-loved British home cook said.

“You wanted to bring us your flavours and you’ve taken them away.

“You’ve changed the texture and the flavour – you’ve reduced the sugar.

“In a way, you haven’t given us an opportunity to taste your food and that’s sad.

“How I wish you had given us proper Malaysian corn pudding.”

After hearing the news, Steven said “there was nothing really they could say that was positive because it just did not work out.

After the judge’s comments, it was time for the contestants and judges to score.

Being at the bottom of the leaderboard can risk elimination from the competition.

Their fellow contestants gave them a combined score of 25 out of 50, one point lower than Peter and Alice.

Meanwhile, Manu and Nigella scored 1 out of 10 for Steven and Frena’s dessert, taking them to the bottom of the leaderboard.

Hearing the news, Steven privately said, “I honestly don’t understand how we got one point lower than Peter and Alice who served a dessert that was not edible.

“I’m annoyed about that, to be honest”.

MKR continues on Channel 7 and 7plus Monday to Wednesday nights at 7.30pm.