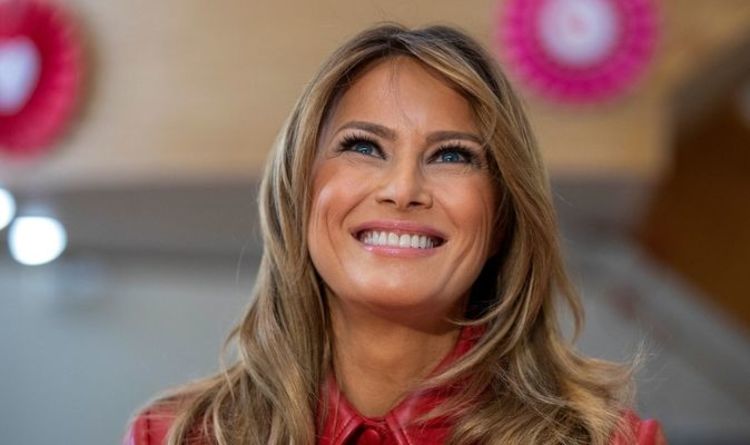 Melania Trump, 51, took to social media to share a celebratory message to the Bitcoin Genesis Block, which celebrated its 13th anniversary on Monday. In a tweet, Ms Trump congratulated the digital currency, which was launched by pseudonymous creator Satoshi Nakamoto on January 3, 2009, after it had surpassed £742.3 billion ($1 trillion) in market value.

Taking to Twitter, Melania wrote to her 1.8 million followers: “It is widely reported that Bitcoin’s market cap exceeds USD$1 Trillion.

“Today marks the 13th anniversary of the Bitcoin Genesis Block.

Last month, Melania jumped on the NFT trend and auctioned a digital painting of her eyes, which was titled Melania’s vision.

In a statement released at the time, Melania said: “I am proud to announce my new NFT endeavour, which embodies my passion for the arts, and will support my ongoing commitment to children through my Be Best initiative.

“Through this new technology-based platform, we will provide children computer science skills including programming and software development to thrive after they age out of the foster community.”

Despite the former First Lady’s interest in the digital currency, her husband Donald Trump has previously expressed his distaste for cryptocurrencies, stating his fears they could potentially crash in the future.

Speaking to Fox News, Mr Trump said: “That [crypto] could be an explosion some day the likes of which we’ve never seen.

“It will make the big tech explosion look like baby stuff. I think it’s a very dangerous thing.

“I want a currency called the dollar, I don’t want to have all of these others.”