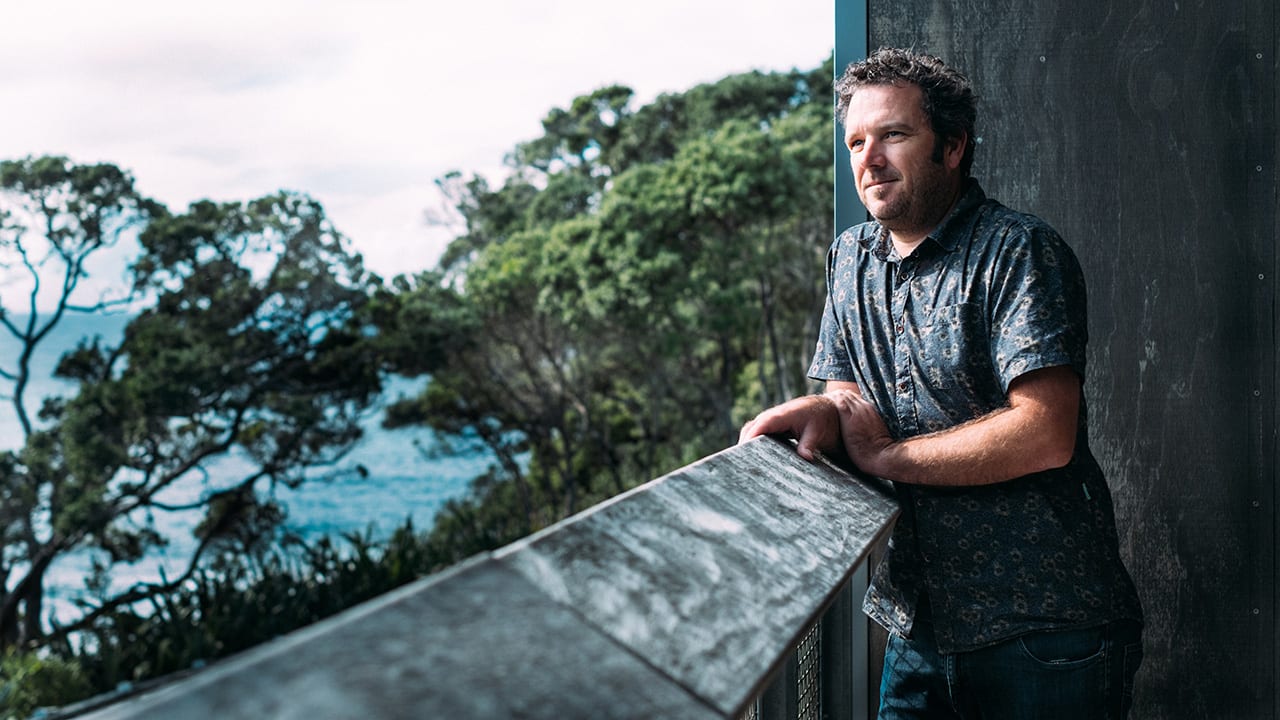 By eavesdropping on the oceans, researchers are working on novel ways to restore seascapes buffeted by climate change

Microphones in the Hauraki Gulf are recording the dawn and dusk choruses of sea urchins, explosive crackles of snapping shrimp, grunts of gurnard, clicks of dolphins, and the rumbles of earthquakes and passing ships.

What oceanographer Jacques Cousteau famously called a ‘silent world’ is to Associate Professor Craig Radford more like a rain forest alive with sound. Call him the reef whisperer: he can distinguish between the ‘sound signatures’ of reefs just a few kilometres apart.

The underwater eavesdropping by University of Auckland scientists at the Leigh marine laboratory north of the city is helping to reveal the blue world in a fashion similar to satellites giving insights into the earth’s terrestrial features.

Radford’s work is significant for at least three reasons. One: fleshing out our knowledge of the lives of individual marine species, which can ultimately aid in managing and protecting marine ecosystems and fish stocks. Two: discovering more about the threat posed to marine life by human-generated noise, especially from ever-increasing ship and boat traffic. Three: learning how to use sound as a tool for monitoring or even reviving marine environments.

The United Nations has called for urgent research into oceans made ever-noisier by shipping, fishing, recreational boating, dredging, geophysical surveying, oil drilling, and sonar. The loudest sounds include seismic air guns blasting pressurised air to map the ocean floor for oil and gas exploration and geological research, something heard in New Zealand waters. In the worst cases, noises can cause temporary or permanent hearing loss for fish or block underwater creatures from hearing the sounds necessary for protecting territory or alerting each other to predators.

A ‘masking’ effect, like cocktail party noise drowning out a conversation, can disrupt fish that rely on sound to form schools to coordinate the release of eggs and sperm for reproduction. Since the 1970s, ambient sound levels in the ocean have more than doubled as shipping has increased, according to Radford.

The work of the scientist and his colleagues has established a baseline for monitoring the health of the Hauraki Gulf and creeping increases in noise pollution.

In the latest round of eavesdropping, PhD student Louise Wilson donned her wetsuit and scuba gear this summer to dive down and moor underwater microphones, called hydrophones, above the sea floor at five spots in Auckland’s Hauraki Gulf – the Noises islands, Tiritiri Matangi, Kawau Island and the Tawharanui and Goat Island marine reserves.

She was extending New Zealand’s longest-running study of noise in the marine environment. Wilson is focusing on boat noise as a follow-up to a pioneering study by PhD student Rosalyn Putland on how sounds from larger vessels, such as cargo and container ships and tankers, affected two species, Bryde’s whales, the most common whales in the gulf, and bigeye reef fish.

Nine months of recordings from four listening stations in the gulf between October 2014 and June 2016 showed that vessel noise reduced the whales’ communication space – the distance at which individual whales could hear each other – by as much as 87.4 percent. For the fish, the decline was as much as 61.5 percent.

At each vessel’s closest point of approach, that rose to 99 percent for whales and fish. While a voluntary 10-knot speed limit in the gulf is mitigating the problem, the study highlighted the potential dangers from expected increases in shipping. The busiest shipping lane, Jellicoe Channel, saw the largest falloffs in communication space for both fish and whales. The masking effects of noise could interfere with whales breeding and reef fish forming schools to feed and avoid predators.

In the latest study, the focus is on the small boats that dominate Hauraki Gulf traffic. Shore-based cameras will photograph boats to help Wilson match underwater noise to what’s happening on the surface.

A significant part of her work will be writing code to analyse the mass of data from the sound recordings. That’s no small task, given that the earlier study yielded no less than 144,000 sound bites.

Broadcasting sound through speakers underwater could help to repopulate kina “barrens,” the term for reefs left barren when sea urchins stage a takeover, wiping out all the kelp. These marine deserts are a problem around New Zealand and the world after reduced numbers of predators such as crayfish and snapper allowed sea urchin populations to explode.

A healthy kelp forest might help to revive the ecosystem after kina have been removed. “If we can set some speakers up, we might be able to promote the recovery of those habitats much more quickly than would happen naturally,” Radford says. “If it works, it would be awesome.”

The idea could be executed at barren sites off Little Barrier, the Noises islands, or Mokohinau Island. There’s also potential to use sound to lure marine animals back to hasten an ecosystem recovery after an environmental disaster such as an oil spill. Scientists at Australia’s Great Barrier Reef attracted fish back to degraded areas of coral reef by broadcasting healthy reef sounds, according to a study published last year. It becomes part of the toolkit for reef rescue missions in oceans ever more devastated by the absorption of carbon dioxide.

In another twist on maintaining healthy ecosystems, Radford is working with Professor Rachel Fewster, a statistician, on potentially using sound recordings as measures of reef biodiversity, instead of sending down divers and cameras, whose presence and bubbles alter the environment they’re recording and scare fish away. That would help with monitoring reefs in especially deep and inaccessible areas. An initial step in devising a metric would be recording a reef then correlating the sound with the life seen by divers in a visual inspection.

Radford started listening to the ocean in 2004 when, as a PhD student, he was asked to investigate how marine larvae used sound as an orientation cue, akin to a homing device.

He didn’t have a clue just how noisy it was down there. Resonating sea urchin skeletons create coastal choruses was the title of one of his studies to generate international interest. That research, published in 2008, revealed big increases in ambient sound intensity in New Zealand coastal waters after sunset and before dawn as sea urchins’ protruding teeth scraped algae off rocks to eat and the noises were amplified by the creatures’ hard, dome-shaped bodies.

“It’s like birds chirping in a forest at dawn and dusk,” says Radford. Phases of the moon and changes in seasons also affect sound levels, with animals less active and quieter in colder periods, his research has shown.

Underwater listening by the Leigh marine scientists is deepening our understanding of the lives of individual species… one click, snap or grunt at a time. “Sound is used for reproduction, to maintain territory, and also for contact calls to maintain the structure of a school of fish – so these are all things that can be key to a species’ survival,” says Radford.

“It’s important that we understand this aspect of the natural history of the animal.” The big eye – a fish that lives in caves during the day – makes clicking noises at night to maintain contact with members of its school to avoid being picked off by predators, the scientists believe.

Some of the grunts that gurnards make may be to chase competitors away from food. Crabs and lobsters never previously identified as making sound have been shown by the Leigh researchers to do so. A close study of the New Zealand paddle crab published last year revealed that males competing for females made a ‘zip’ and a bass sound, apparently to warn off potential male rivals. After capturing the first underwater recordings in the wild of the pig-like grunt of the John Dory – a noise anglers may know from catching the fish – the scientists now want to focus on the fish’s spawning.

“It would be awesome to get some conclusive evidence that they’re producing noise during reproduction,” says Radford. If he’s correct that sound plays an important role in John Dory reproduction, anthropogenic noise may pose a special threat.

Ubiquitous in Hauraki Gulf soundscapes, and around the world, is the snapping shrimp, responsible for the crackling noises scuba divers hear at reefs. In an intriguing feat of propulsion, the shrimp makes a rapid claw movement to produce a jet of water that creates a popping bubble – and a noise loud enough to stun prey.

Counting snaps, Radford and colleagues revealed the shrimp’s favourite time for making noise was at dusk under a new moon. Endless questions remain. If a shrimp’s snap is extremely loud – 150 to 190 decibels, maybe the equivalent of the noise that a train makes pulling into a New York subway station – then how come they don’t deafen themselves? How do paddle crabs make sound? One of Radford’s key focuses now is understanding how sharks localise sound – a major project that includes putting the creatures through MRI scanners.

The field of underwater acoustics got a jump-start last century when World War II prompted the development of devices to detect U-boats and ships, and military personnel puzzled over unknown sounds in the sea. In recent decades, better and cheaper hydrophones have prompted advances. A former technician at the Leigh marine laboratory, John Atkins, purpose builds the hydrophones used in the Hauraki Gulf studies – and has also built a business, Ocean Instruments, exporting them around the world.

New Zealand lags behind international efforts to tackle underwater noise pollution, the scientist says. Examples from overseas include a European standard for marine noise and actions by individual ports, such as Boston, which has warning systems to ensure that ships don’t impede passing Northern right whales. “People here in New Zealand hardly even know that sound is important for marine animals, let alone knowing that we need to reduce the noise impact,” he says.

That’s why he’s a keen public speaker, outlining the wonders of communication among sea creatures and the threat from anthropogenic noise. “Noise is a threat like climate change, but the good thing with noise is, if you turn it off, it’s gone.”