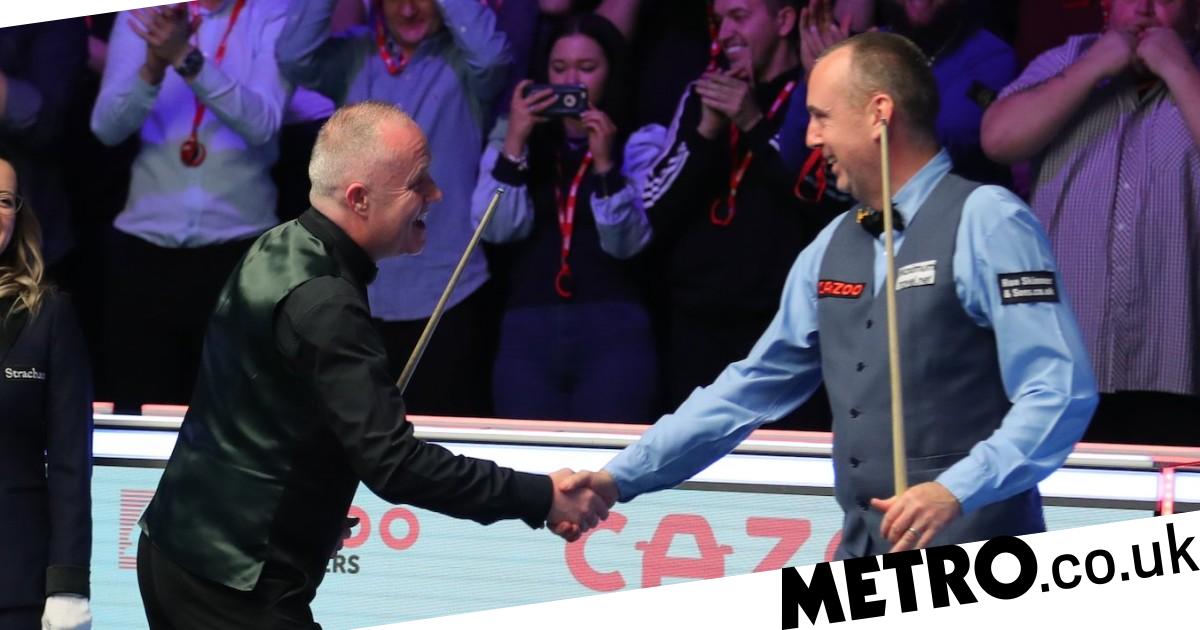 Mark Williams edged out John Higgins 6-5 in a Masters classic on Thursday night, but regardless of the result, both legends of snooker were revelling in the atmosphere at Alexandra Palace, which they both classed as the best they have ever experienced.

The superb match wound its way all the way to a deciding frame after a back-and-forth contest, but it was Williams who got over the line with an immense break of 91 under the greatest pressure.

Both men were in fine form, with Higgins opening the match a break of 126 in the first frame, but it was the crowd as much as the standard of play which made the match memorable.

The fans at Ally Pally were in great voice and, despite having seven world titles between them and seemingly having seen everything in the game, both Williams and Higgins thought it was the best atmosphere they had ever played in.

‘It was a great game, a great occasion. I’ve never experienced a crowd like that,’ Williams told Eurosport. ‘We had a standing ovation which felt like 10 minutes before we started, and then again for the final frame, it was just amazing.

‘It made the occasion even more special because obviously the respect between me and John is massive, but when the crowd’s like that, it’s unbelievable.

‘To make a break like I did in the last frame like I did, under that pressure, I’ve got to pat myself on the back, I think.

‘I was in the toilet and I heard them cheering for him, I thought, “gee whizz”.

‘Then I went in and it was electric, probably the best atmosphere I’ve played in in 30 years as a professional. Nothing can ever top that.’

Higgins added: ‘I gave it everything and what a break he’s done in the last frame, he does it so many times against me. Under the utmost pressure it was an unbelievable break.

‘What an atmosphere! I played great but what can you do? Just the run of the balls sometimes, here and there. But what a night, the best atmosphere I’ve ever played in front of, incredible.

‘What a night, I’ve enjoyed it. It blew my mind really, the way it was. What can you do?

Higgins won the first two frames before Williams reeled off the next three, including his high break of 116.

The pair could not be separated, though, and they found themselves in a decider after the Wizard of Wishaw won the penultimate frame.

The Scot made just one mistake in that 11th frame, missing a long red, with the Welshman stepping in to make a really difficult 91 and win the match, a break he classes as one of his best ever.

‘I came off at the interval, my legs and arms were shaking, my heart was beating 100 to the dozen and I’m never like that,’ said Williams.

‘I said to [friend] Lee Walker, “If I had to play every match like that, there’s no way I could carry on. Then I went back in and it was back to normal.

‘I’ve always backed myself in a decider if I get a chance to win the frame in one visit. I back myself as good as anyone in that position. It’s probably one of hte best breaks I’ve done.’

Alan McManus on Eurosport commentary put it beautifully, saying: ‘The atmosphere out there is white hot, but there’s been a coldness about this that very, very few players in the history of the game are able to do.

‘Incredible stuff. What a champion and what a performance.’

Williams will now take on Neil Robertson in the semi-final on Saturday afternoon.