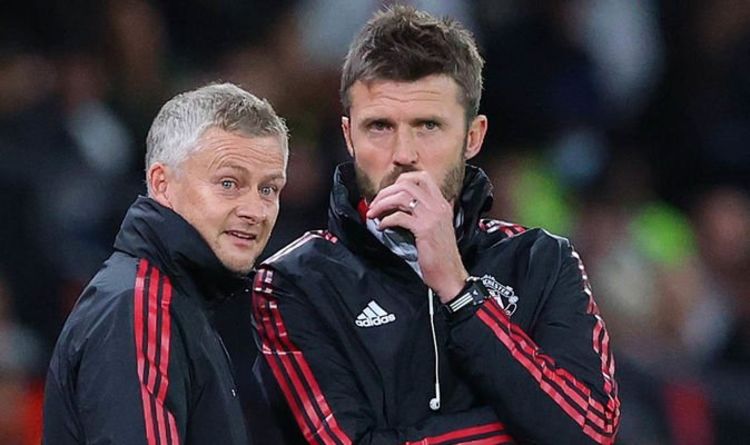 Manchester United hero Michael Carrick has spoken out ahead of Tuesday night’s Champions League clash with Villarreal. The former midfielder is on caretaker duty following the departure of Ole Gunnar Solskjaer. And he’ll be looking for a return to winning ways right from the start.

Manchester United sacked Solskjaer on Sunday, less than 24 hours after they’d been battered 4-1 by Watford at Vicarage Road.

The club are now looking for an interim boss to see them through to the end of the campaign, with Carrick on caretaker duty.

And the temporary United boss has now opened up on Solskjaer’s departure.

He called it an ‘emotional’ parting of the ways, saying: “Emotional time for everyone at club, worked with Ole for three years and known him for a lot longer.

“To see him lose his job was tough for me and a lot of people at the club.”

THINK YOU KNOW SPORT? Test your sporting knowledge with our tricky quiz

Carrick also revealed he was solely focused on Villarreal and not getting the job in the long-term.

“In terms of what I’ve been told my mindset is preparing for tomorrow, giving my best,” he said.

“I know the club very well, been here an awful long time now.

“It’s the sacrifice and dedication you need whether that is one game, two, or a stretch longer.

“A big game for us in terms of group stages and I will go about my job exactly as I know.”

And the England international has admitted they must improve considerably in order to get the club to ‘where they used to be’.

“The players need to take responsibility,” he said.

“We are in this together. Ultimately the manager has paid the price, we are all so disappointed by that.

“We know we haven’t been good enough. We have spoken about that. The lads want to succeed.”

And he added: “We were in it together, we have done everything we can. We are giving everything, we want to succeed.

“The manager came in and spoke to us, it was an emotional day. He was a legend, he will remain one.

“He wished us well, he will be supporting us. He wants us to win every game of football.

“I think in football you have ups and downs. The toughest time for many at club level.

“It hasn’t been good enough, not delivering individually or collectively. It snowballed from one thing to another.

“We have to find something within ourselves to find that focus and mentality.”