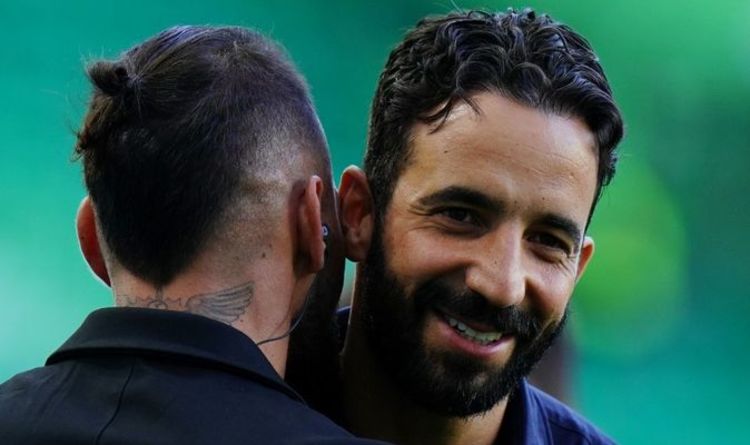 Sporting manager Ruben Amorim has emerged as a surprise candidate for the Manchester United hot-seat, according to reports. The 36-year-old tactician is quickly emerging as one of the brightest young coaches within the game having fast-tracked his way to the summit of Portuguese football.

Amorim was still playing for Benfica as recently as 2017 before he decided to embark on his managerial career.

Yet since then, the former midfielder has made life in the dugout look easy wherever he has been having already worked at Casa Pia, Braga B and Braga.

Sporting came calling in 2020 and paid around £8million to release him from his Braga contract despite only having two months of top-flight experience.

Amorim’s task at Sporting was not easy when he first arrived at the club following the sale of the attacking midfielder to United in January 2020.

However, he reshaped and crafted a new-look squad that would go the full season without losing in the Primeira Liga.

While his achievements cannot be questioned, Amorim would represent a slightly left-field appointment from the Old Trafford hierarchy.

Ralf Rangnick is under no illusions that the board are already plotting their next move ahead of summer.

VOTE FOR YOUR PREMIER LEAGUE PLAYER OF THE YEAR HERE

Mauricio Pochettino, Erik ten Hag and Brendan Rodgers have all found themselves linked with the position.

PSG boss Pochettino appears to be the most likely candidate for the role given that he does not appear to be happy in France.

All of United’s managerial targets are currently tied down to contracts.

Yet there is a feeling that United can land whoever they desire from their shortlist once the current season has been concluded given that managers generally find it hard to leave clubs mid-season.