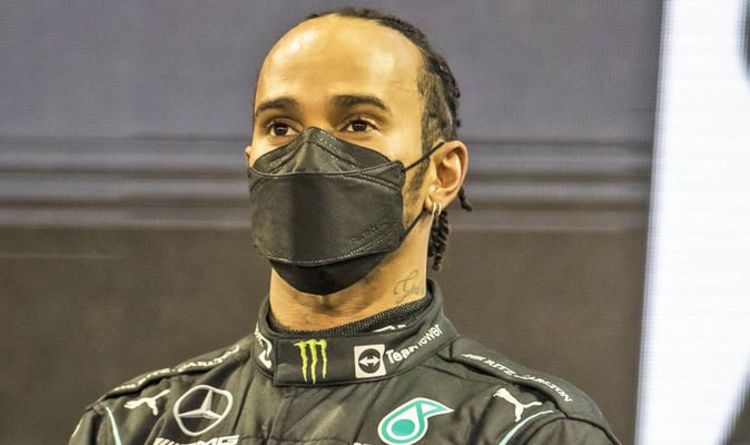 Lewis Hamilton is shooting himself in the foot by allowing uncertainty over his Mercedes and F1 future to rumble on. The Brit could easily come out and put talk of quitting the sport to bed. While his heartache is understandable after his defeat to Max Verstappen in Abu Dhabi last month, it’s still going to have a detrimental impact.

Hamilton was just one lap away from overtaking Michael Schumacher’s record of seven F1 titles in Abu Dhabi.

Yet the Brit was denied victory in the end, with an incident involving the safety car allowing Verstappen to reign supreme instead.

It was a hammer blow to Hamilton who cut a sad figure in the aftermath, saying ‘we’ll see about next year’ when quizzed on his future in the Middle East.

Since then, talk of Hamilton potentially retiring from F1 after a glittering career in the sport has gathered momentum.

Some, like Bernie Ecclestone, thinks the Brit will walk away after talking with the Stevenage-born racer’s father.

“I don’t think he is coming back, I think he will not race next year,” Ecclestone said at the end of last month.

THINK YOU KNOW SPORT? Test your sporting knowledge with our tricky quiz

“His disappointment in Abu Dhabi was too great, and I understand him. A couple of days ago I spoke with his father.

“I realised immediately that he did not want to talk about the future of his son, so we just talked about business.”

Others, however, believe Hamilton will carry on.

Old foe Nico Rosberg, who was the last person to beat the Brit to F1 glory prior to Verstappen’s triumph, is one of them.

“It was heartbreaking for him, absolutely, because up until four laps from the end he was almost certain to be world champion,” he said recently.

“Then with this change of procedure or whatever you want to call it, suddenly he lost the world championship.

“It was tough, it was extremely tough.

“But of course I do count on him being back on the grid next year and fighting to get back that world championship that kind of got taken away from him in a way.”

At the moment, Hamilton’s future is currently the biggest talking point within F1.

But the Brit is wrong to allow the speculation to rumble on when all he needs to do is address it.

Sure, the pain of losing out to Verstappen is bound to hurt. So much so he’s unfollowed everybody on Instagram, including his dog.

Yet the uncertainty is set to cause issues both himself and Mercedes, as well as Formula One overall.

If Hamilton is to quit, Mercedes need enough time to bring in a top replacement.

Staying silent, certainly, won’t help him either. It means whenever he’s quizzed or interviewed in the coming weeks ahead, there will only be one topic of conversation.

Hamilton can put these rumours to bed with a simple post on one of his many social media channels.

Instead, he’s only prolonging the pain and heartache – as well as making life more uncertain for those so desperate to see him return.

Mercedes appeared to drop a hint over his future earlier in the week with a cryptic post that read: “Adversity causes some to break; others to break records.”

That could be read as a sign Hamilton will stay with the Silver Arrows.

Yet it can also be interpreted as Mercedes putting pressure on their best driver to go again, rather than walk away.

Until Hamilton confirms his stance, the rumours are primed to rumble on for a little while yet.