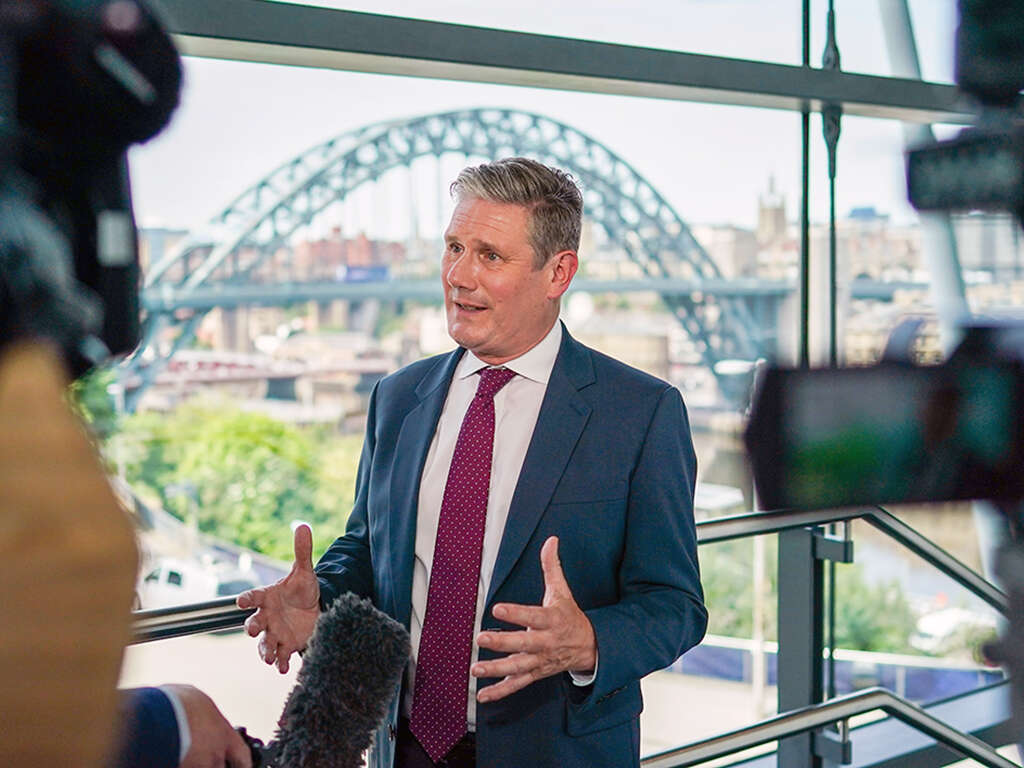 Labour’s big economy announcements yesterday (25 July) were marred by rows over its position on public ownership. Keir Starmer and the shadow chancellor, Rachel Reeves, initially ruled out bringing crucial public utilities into state ownership, before she back-tracked and confirmed Labour’s support for rail nationalisation. The party is out of line with public opinion, out of line with global economic trends, and may even find itself on the wrong side of the Conservatives on the issue.

Public ownership is popular – hugely so. There is majoritarian support for water, buses, railways and gas and electricity supplies being in public hands. Conservatives are only slightly less likely to support public ownership than Labour voters: 60 per cent of 2019 Tory voters support the public ownership of energy, according to one poll by Savanta ComRes. With privatised water companies dumping sewage in our rivers, privatised energy companies administering extortionate bill increases, and privatised bus companies cutting essential services, the 1980s model of essential services has run out of road.

Some nationalisations are not even projected to be expensive. The Trades Union Congress estimates that to take the “Big Five” domestic energy retailers into public hands would cost £2.75-£2.85bn. This one-off amount would be a tenth of the £28bn Labour says it wants to commit, every year, to green investment.

Nor is Labour’s commitment to its “fiscal rules” an obstacle, despite Reeves yesterday suggesting they would prevent it “spending billions of pounds” on nationalisation. Spending to buy businesses is capital spending, not “day-to-day spending”, as she implied. And when the government buys a business it acquires a valuable asset, meaning a sensible fiscal approach would be to look at both sides of the government balance sheet – not only the borrowing on one side, but the asset on the other. If Reeves truly did not want to borrow money, a one-off wealth tax could raise the funds.

Labour’s problems come from two places. The first relates to Starmer’s project as an alternative management plan for British capitalism. Privatisation has dominated mainstream economic thinking since the late 1970s, with Conservative governments in Britain among the most enthusiastic global proponents of selling off public companies. Labour under Tony Blair accepted the new approach, in which essential public services – which in most developed countries still remained in government hands – would be administered by for-profit businesses.

But economic circumstances are changing, rapidly. State ownership across the globe was on the rise even before the pandemic. The International Monetary Fund estimates that the largest state-owned enterprises have assets worth $45trn, equivalent to around 50 per cent of global GDP. The pandemic exposed the severe vulnerabilities of overextended global supply chains, prompting governments to build up domestic capacity in industries such as semiconductors. The future is likely to be dominated by state-backed and state-owned enterprises confronting each other in an increasingly unstable world.

It was in anticipation of such a future that the British government recently nationalised the steel producer Sheffield Forgemasters, citing its importance to “critical… defence programmes”. The government has also laid out plans to part-nationalise the National Grid to help meet decarbonisation targets. It nationalised rail during the lockdowns, has already nationalised one gas company and, as water shortages and sewage leaks worsen, the nationalisation of water companies may not be far off.

This is where Starmer’s project runs into what we might call its internal contradictions. Starmerism, to the degree that it has been defined by anything, has been distinguished by the effort to distance Labour from Jeremy Corbyn, including his programme for public ownership. Given Labour’s 2019 election defeat under Corbyn, this is not surprising. But for Labour’s leadership, this tactical distancing has metastasised into something approaching a weird, increasingly obsessive need to continually affirm that Keir Starmer is not Jeremy Corbyn. Popular, sensible policies such as public ownership, supposedly tainted by association with Starmer’s predecessor, are irrationally shunned. The former leader is living rent-free in the heads of the opposition leader’s office and it’s warping their ability to think.