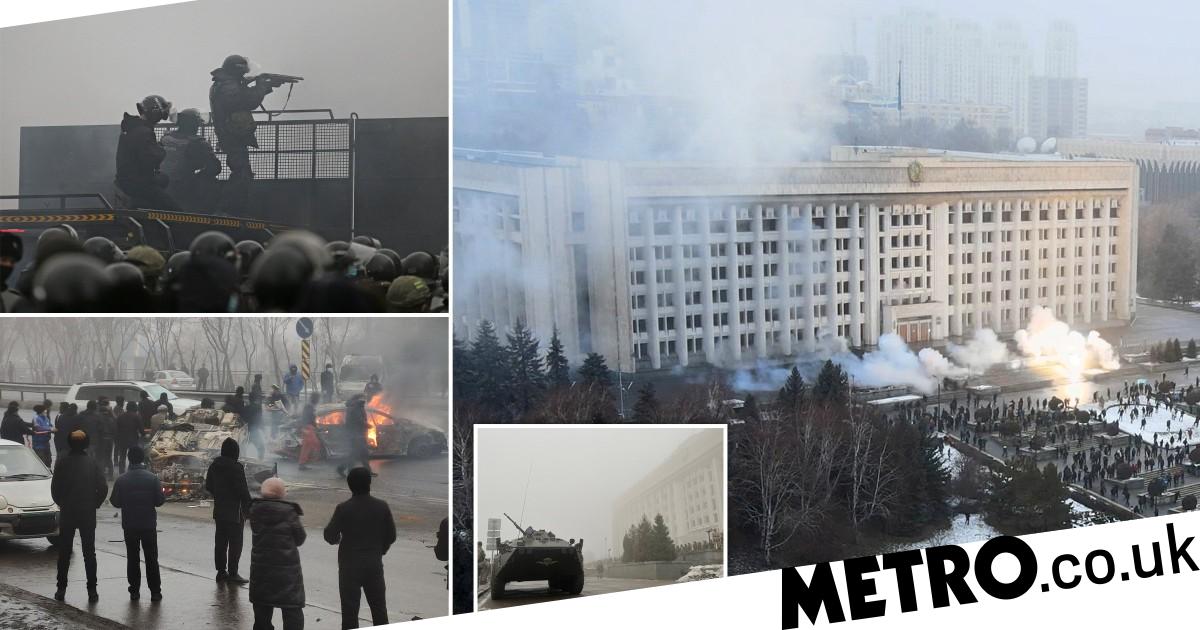 A fire was seen blazing inside the mayor’s office of Kazakhstan’s biggest city as protesters stormed the building.

Protesters in Almaty managed to break through security forces’ cordons despite police launching stun grenades tear gas and a water cannon to keep them back.

Windows were smashed and doors were broken while wounded people were taken from the building by an ambulance.

But the mob, many of whom carried clubs and shields, stopped other paramedics from reaching the administration building.

Demonstrations began in the west of the former Soviet republic on Sunday after drivers found out the price of refilling their tanks had doubled. Unrest has since spread to several towns and cities, with some calling for a regime change.

Protests led to the overnight resignation of the government, hours after it declared a two-week state of emergency in Almaty and the oil-producing region of Mangystau.

The move includes an 11pm to 7am curfew, movement restrictions and a ban on mass gatherings.

Apps such as Telegram and Twitter have been blocked blocked and restaurants, cafes, banks and public transport were shut down in the country’s financial capital.

Explosions from stun grenades could be heard throughout the city centre and violent clashes erupted in the streets.

Today thousands of protesters were seen pressing ahead towards the city centre, some of them on a large truck.

The interior ministry said that government buildings were also attacked in the southern cities of Shymkent and Taraz overnight, with 95 police wounded in clashes. Police have detained more than 200 people.

Meanwhile a government business jet was spotted heading for Russia with no immediate explanation.

A soldier in Almaty was seen falling and being dragged away by comrades after apparently being shot by a protester.

It was increasingly clear that the Kazakh authorities had lost control of the rioting, at least in Almaty, the former capital.

Separately, 20 National Guards were beaten by baton-waving protesters in the city, with four or five left in a grave condition.

More footage showed a peaceful gathering in Zhanaozen, where a large crowd made five demands for a revolution.

They demanded regime change in authoritarian Kazakhstan, popular elections for governors, a return of the 1993 constitution, a president from outside the wealthy elite, and an end to persecution of human rights activists.

In one extraordinary video from the city of Aktau, police appeared to be announcing that they were ‘with the people’ with cheers in response.

Around 100 police officers were wounded in the night violence in the ex-Soviet state, according to official figures.

The resignation of the Kazakh government evidently did little to restore faith in President Kassym-Jomart Tokayev,vi who blamed unidentified domestic and foreign provocateurs for the mayhem.

In a video message, he said: ‘Calls to attack government and military offices are absolutely illegal.

‘The government will not fall, but we want mutual trust and dialogue rather than conflict.’

Chief editor of ORDA Kazakhstan online newspaper, Gulnara Bazhkenova, said: ‘This is the largest ever mass protest in Kazakhstan. In Aktau alone we had about 16.000 protesters.’

Publisher of Uralskaya Nedelya newspaper Tamara Yeslyamova said: ‘We are in a vacuum. There is no internet, no WhatsApp, Telegram and Twitter.

‘Business is paralysed with people unable to pay for shopping with mobile payments.

‘Activists who are visiting our office said they were brutally beaten. We are checking this information.’

Almaty mayor Bakytzhan Sagintayev said he had control of his city, and that the security forces were detaining those behind the rioting.

He added: ‘Domestic and foreign instigators are behind the destabilisation attempts and extremist actions.

‘Instigators and extremists are being detained, masterminds are being established.’

The president conceded to an early demand of those on the streets saying: ‘We need to carry out a comprehensive reboot of the gas industry, and make sure that there is enough gas on the domestic market.’

He blamed the Energy Ministry as well as wealthy gas producers KazMunayGas and KazakhGas – both with significant Russian links – for the crisis.

He accepted the resignation of his cabinet and fired a number of officials.