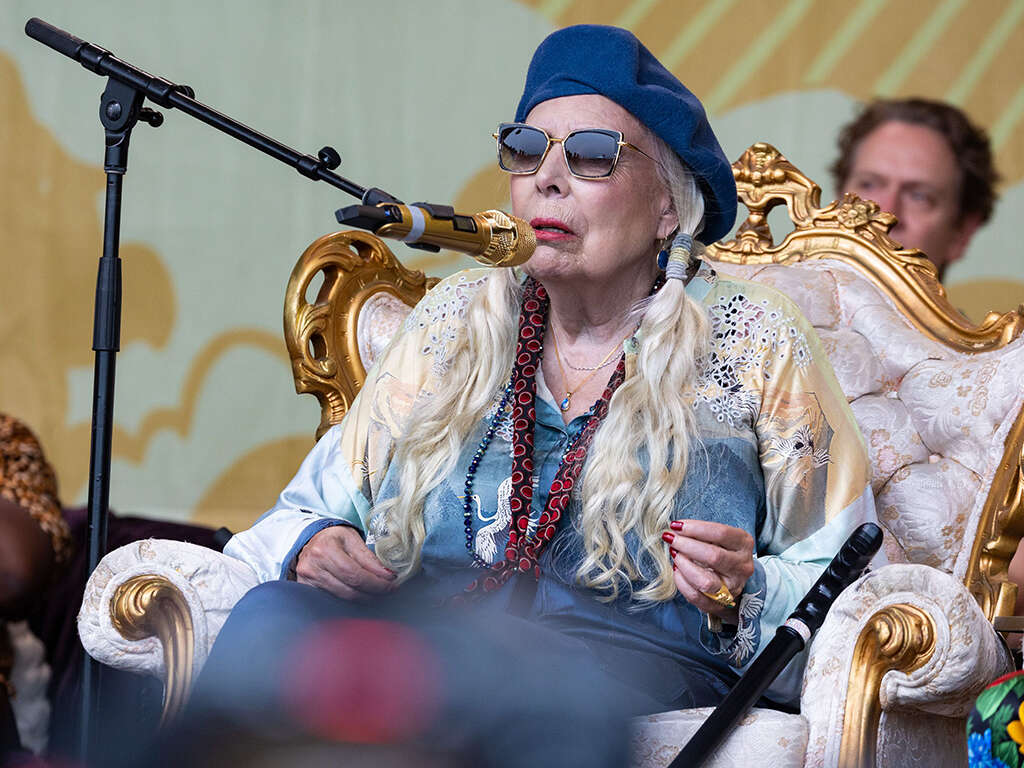 I was looking for socks in a drawer when a phone was placed in front of me, showing clips of Joni Mitchell’s surprise performance at the Newport Folk Festival in Rhode Island last weekend, her first full live show since 2002. As the little hairs rose on my arm, I uttered words spoken, I think, by many: “What the actual f…” The Mitchell voice was subsonic, rich and brown with age and fags, but not unlike it was 20 years ago, when she came out with a great orchestral album, Both Sides Now.

For many years Mitchell, now 78, has been buffeted by a neurological condition that she’s described as being “from outer space” and “eating her alive”. She’s had brain aneurysms, and can hardly walk. It was a wonder there was any voice at all. But the real wonder was not that Joni Mitchell was well enough to sing at Newport, but that she was remotely willing to get on stage in the first place.

Like no one else in popular music there is a sense, with Mitchell, of a personality at odds with the place she holds in people’s lives. She stopped making records in 2007, disgusted with the industry. That year, she said she hated music and was only able to listen to talk shows on the radio. She illuminated human experience and produced powerful unconscious connections between generations of people, but she isolated herself along the way.

The young Mitchell was a willing conduit for love and pain, a foot-soldier on a mission into the world of difficult emotions. As she grew older she became more armoured and solitary, almost warrior-like. But for years now, she’s been here-but-not-here, and not only because of illness, looking at the world down the barrel of a cigarette, in her home in California, surrounded by mystery and her own paintings. She is not some music grandee offering words of wisdom – she is a dissenter grumbling about how everyone got her wrong the first time round. Fortunately for the rest of us, I think people actually understood her pretty well.

At Newport, Mitchell became animated in her throne-like armchair on stage, tapping her shiny hands, her body fighting to take the lead. She looked beatific at the end of “Both Sides Now”, the show’s most moving moment; her voice drops to a deeper register each time she reimagines the song: 1968, 2000, 2022.

Some of the set was, you suspect, frustrating for the live audience who’d only just discovered she was there at all: Brandi Carlile sang the lead on many songs, presumably to guide her, with Joni rumbling away below. The stage was set up like Mitchell’s California living room, I’m told, where she has been hosting “Joni Jams” for the past few years. All about her, young and enraptured musicians strummed guitars – they grated a little on me, then I remembered, half way through “The Circle Game”, that things have always been like this for Joni, and the original version of that song, too, was packed with awestruck friends on backing vocals, only in those days it was Crosby, Stills and Nash. Mitchell has always been surrounded by acolytes, and she has always been somehow above them. For many years she was able to wear that duality lightly. In some small way, Newport felt like a resurrection of a former self.