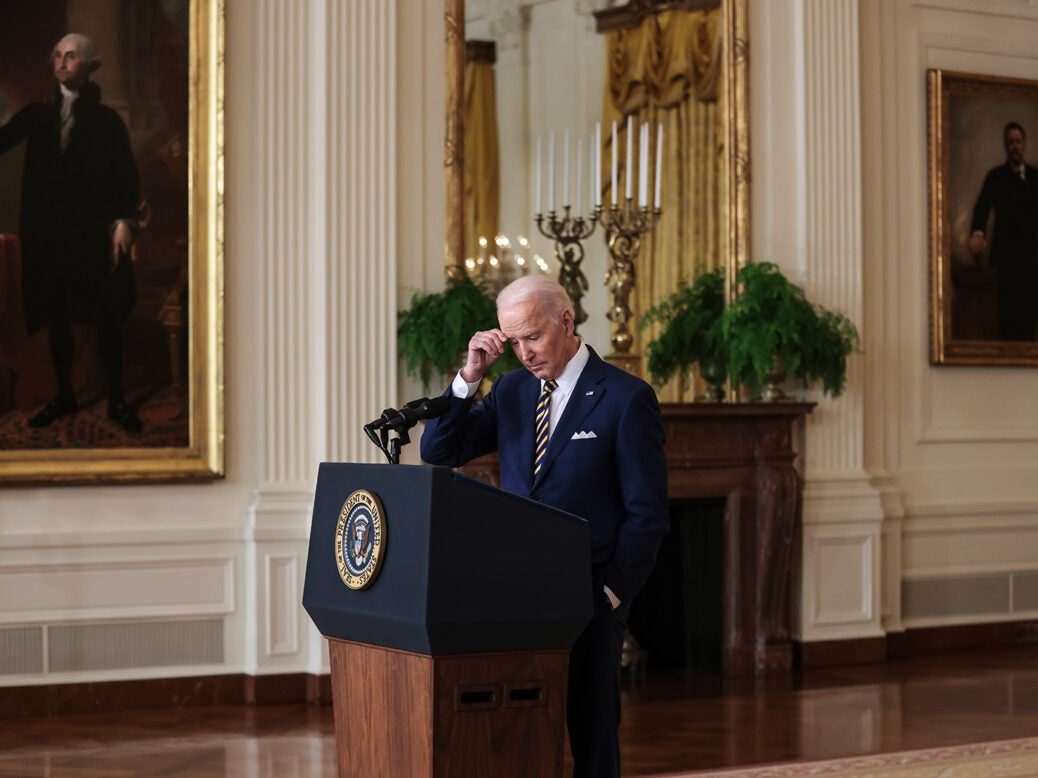 WASHINGTON DC – When US President Joe Biden took office a year ago today on 20 January 2021, he spoke, repeatedly, about unity. He had campaigned on a promise to restore the soul of America. On inauguration day, and in the early days of his presidency, he vowed to “build back better,” the slogan that is now attached to an ambitious piece of domestic legislation currently stalled in the Senate.

In a way, the gulf between the call to build back better and the reality of Congressional mire is symbolic of his first year as president. Despite Biden’s quick start, much of the last 12 months has been promises half-fulfilled — or not fulfilled at all — and muddled messaging.

Looming over the first year is, of course, the pandemic, with its multiple waves and variants. The Biden administration beat its own target on vaccination rates but now finds itself repeating “get vaccinated” when it is clear that there are other problems — such as school opening and closure policies and hospital capacity — that need to be solved at the state or local level, if they are to be solved at all.

But even aside from the ravages of the pandemic, there are ways in which the Biden administration has, in some ways, beaten itself in this first year.

While Biden campaigned against president Donald Trump’s brutal and draconian immigration policies, the reality is that some of the cruellest have remained in place. “What we’ve seen from the president himself is a doubling down on Trump-era policies,” Nancy Meza of the Refugee and Immigration Centre for Education and Legal Services, told me on Battle for the Soul of America, our three-part mini-series on the first year of the Biden presidency. She added, “We know that the Democrats on their own will not act on behalf of immigrants.” Activists are gearing up to put further pressure on the administration in year two.

Immigration is not the only space where activists and experts feel let down. Biden came into office with Trump claiming that the election was fraudulent and trying to discredit the legitimacy of votes from, notably, cities with large black American populations. In the year since, at least 19 states have passed more than 30 laws that, in practice, will restrict access to the vote.

This week, a year after Biden came into office, the Senate debated the issue of whether to change Senate procedural rules to be able to pass federal voting rights legislation with just 50 votes (since Republicans will not cross the aisle to protect the right to vote). Democrats failed to unite behind the proposal, thus ensuring it failed and with it the bills on voting rights.

To many, it’s already too late. “Perhaps this is a lesson for the Biden administration,” Keisha Blain, an associate professor of history at the University of Pittsburgh, told me on the third and final episode of Battle for the Soul of America. “He needs to really listen more, quite frankly, to the people who elected him. I’m always struck by the fact that so many people galvanise and come together and make it possible to elect officials, and then most officials get into office and then turn around and critique the very people who made it possible for them to be there.

“It’s time to listen,” she said. “And it’s time to not be dismissive.”

Perhaps Biden’s most mixed record is in the area he touted as his strongest: foreign policy. Biden did fulfill his promise of withdrawing from Afghanistan, but did so in a way that left many Afghans who had helped the United States scrambling to get out or stranded in the country, while US allies felt betrayed at the way in which the United States left. The United States is trying to pivot (again) to focus on China; Russia, hovering above the idea of invading Ukraine (again), reminds Washington that Europe cannot be put on the backburner that easily.

Still, despite all of that, there is reason to hope for year two.

On Twitter, Yamiche Alcindor, an anchor of the news programme, Washington Week, on PBS, said of Biden’s press conference on Wednesday 19 January, “He took responsibility for mistakes he believes he made, expressed genuine frustration w/ Covid & his agenda being stalled by GOP and Democrats & took hard questions without insulting folks”. If Biden, in year two, focuses on accountability and answering the American people, he may yet be the president he promised to be.