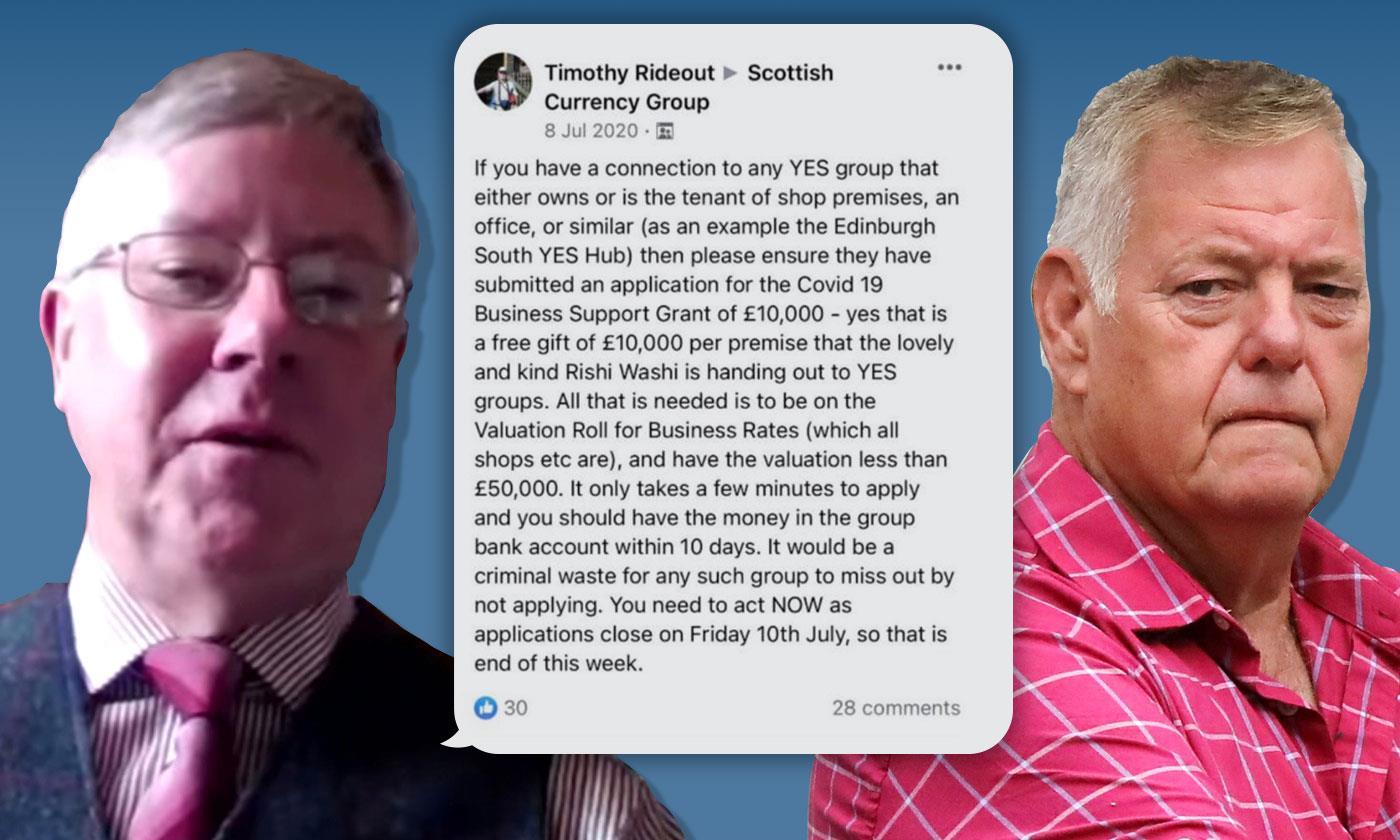 Independence activists who banked £20,000 in Covid support grants “for the indy cause” have been cleared by a council fraud probe.

Community “Yes hubs” Brechin Blether In and Forfar Blether In each received £10,000 of money set aside to help businesses struggling during the coronavirus pandemic.

We can reveal that after our own investigations pushed council bosses to launch an internal fraud probe into the payments, officers concluded they were appropriate “based on the guidance and information available”.

However, they also admit no checks were ever carried out on how the money was going to be used.

Brechin Blether In and Forfar Blether In have repeatedly refused to say what the thousands of pounds they received was spent on.

Activists were coached how to apply for the cash by SNP officer Tim Rideout, who boasted of making £50,000 “for the indy cause” in a single day through the scheme and encouraged successful applicants to make a “wee donation” to his campaign group.

He has stated no such donation was ever made.

Council bosses called in the fraud squad after we uncovered the activists had been storing and sharing papers promoting the SNP and its leaders from their Angus hubs, despite telling officials they are not party political.

It came after Inverclyde Council launched a probe into similar activities by a group called Yes Inverclyde, which also claimed £10,000 from the support scheme.

Government rules say no part of the grant should be used “to fund any activity or material which is party political in intention, use, or presentation or appears to be designed to affect support for a political party, including in relation to offices occupied by MPs, MSPs or councillors that would otherwise be eligible”.

Angus Council repeatedly refused to say whether fraud investigators had looked at the payments made to the Forfar and Brechin hubs.

However, in a letter to North East MSP Maurice Golden, seen by us, chief executive Margo Williamson confirms the local authority’s counter fraud team was called in – but only after we highlighted the issue.

In her letter to Mr Golden, she says government guidance requires the council to check eligibility for the grants “but did not require checks to be carried out on how the grant would be used”.

Mrs Williamson confirms the cash paid to the Brechin and Forfar hubs was “reviewed” in April 2021 – around the same time the council’s director of finance launched an investigation into support grants incorrectly awarded to two local SNP branches.

This included a review of their purpose, activity and social media presence as well as phone calls with those running the facilities.

“The conclusion reached at that time was that although these Blether In
facilities promoted Scottish independence, their activities did not make them
ineligible for the support grant which had been awarded,” Mrs Williamson says.

She also confirms that the council’s finance director asked for a second probe in November – this time an “independent review” by the counter fraud team – after we revealed so-called “Yes papers” were being distributed from the hubs.

“It is important to stress that the counter fraud team’s review was undertaken some 17
months after the original decision to award the support grants and accordingly the
investigation had to be based on an observation of the Blether Ins current activity
and a review of the historical information available,” Mrs Williamson says.

“The conclusion reached by the council’s counter fraud team is that payment of the grants was appropriate.

“Council officers also contacted Scottish Government officials to discuss the matter and they are content with the council’s decision to award the grants.”

Brechin Blether In and Forfar Blether In have repeatedly ignored questions about whether they will follow the lead of Yes Inverclyde and pay the money back.

Neither responded when approached for comment on the council’s decision.

Lessons must be learned

North East MSP Maurice Golden, who has led calls for the council to investigate, said he welcomes that the authority “treated this matter with the seriousness it deserved”.

However, he added: “The fact remains that money intended to help honest and hard-pressed businesses and organisations instead went to a political group who were coached to work the system.

“The nationalists’ silence on this matter tells its own story, as does the outrage from members of the public for whom this leaves a very sour taste.

“Although officials have pursued this, it’s clear there are still important lessons to be learned to avoid this kind of scandal in future.”

How suggestions of a ‘free gift’ for independence groups raised concerns

However, concerns were raised over statements made by independence activists about why they were applying.

In a conversation with Forfar Blether In’s Bill Golden on July 8 last year, which has since been deleted, Tim Rideout said it would be a “criminal waste” for independence activists to miss out on the “free gift” of £10,000.

Mr Golden later posted a message saying he had been successful in applying and an “urgent email” had been sent to all Yes hubs in Scotland.

Brechin Blether In received their £10,000 after Mr Golden said he would pass the information to Angus SNP councillor Kenny Braes directly.