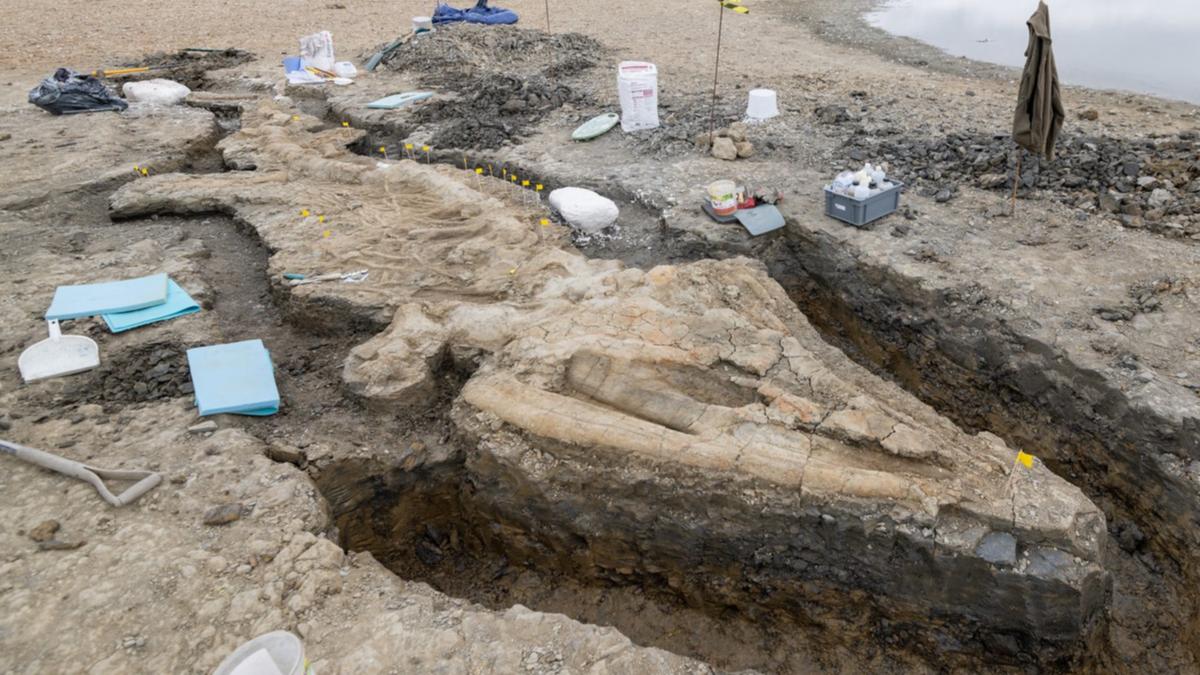 What began with routine maintenance at a British nature reserve and reservoir has been hailed as a giant Jurassic “mega-find.”

Officials at Anglian Water and the Leicestershire and Rutland Wildlife Trust have uncovered the skeleton of an extinct prehistoric reptile predator, known colloquially as a sea dragon.

Watch the video above for more on this incredible find

At almost 10 metres in length and with a huge skull weighting around one tonne, the ichthyosaur fossil is the largest and most complete ever discovered in the U.K.

It lived about 180 million years ago, during the Jurassic Period when dinosaurs walked on land.

“It’s the most complete and larger than any dinosaur skeleton ever found here, so it’s a mega-find for so many reasons,” said paleontologist Dean Lomax, who led the excavation.

“During this time period, it would have been right at the top of the food chain. It’s an ultimate apex predator, perhaps one of the biggest animals in the sea worldwide.”

Two other incomplete and smaller ichthyosaurs were found on the site in the 1970s, according to Anglian Water, which co-operates the reservoir.

Lomax added that larger ichthyosaur fossils have been found outside of the U.K., including in Canada, though remains of this large size are rare.

Ichthyosaurs, extinct marine reptiles that resemble dolphins or sharks, were first discovered nearly 200 years ago on the Jurassic Coast in the south of England.

They went extinct 90 million years ago.

Rutland Water Conservation team leader Joe Davis first came across the fossil as he and a colleague walked across an area of the reserve that was being drained early last year.

He noticed something that looked like clay pipes sticking up out of the mud, but after a closer look, thought the pieces could be vertebrae.

He called local officials and it was not long until Lomax came to inspect the fossil.

The huge and fragile skeleton was then carefully excavated in a complex operation that took place over the course of two weeks in August and September 2021 by a team of paleontologists.

The fossil was then wrapped in wooden splints encased in plaster in order to protect it.

Along with its size, the fossil was also notable because it was discovered outside of the areas on England’s southern and Yorkshire coasts where ichthyosaurs have previously been found.

In contrast, this fossil was uncovered in a landlocked county around 100 miles north of London. During the Jurassic Period, the area was covered in a warm tropical sea.

“The first ichthyosaurs found in the Jurassic Period were a couple of meters long, between five and 10 feet, whereas this ichthyosaur, and others that have been found but are less complete, are the first that are real Jurassic giants,” said Lomax.

“It’s an interesting way of looking at the historic evolution of ichthyosaurs.”

Lomax said he hopes that this complete fossil will help paleontologists fill in gaps in knowledge with other incomplete ichthyosaur fossil fragments that have been discovered in Britain.

The remains are now in the lab of palaeontological conservator Nigel Larkin, where they will be cleaned, preserved and prepared, according to Lomax.

The ichthyosaur will be ready to go on display in the next 18 to 24 months.