When people retire they often say they look forward to travelling, playing golf, gardening or spending more time with their family. But there is one hobby which newly retired baby boomers are taking to with gusto. That hobby is politics.

Although the elderly tend to the right politically, there are many exceptions. Older lefties enthusiastically joined Momentum, hoping to revive the Labour Party of their youth. Retired people swelled the ranks of the pro-EU protesters milling around Parliament Square during those tense days of 2019. When Extinction Rebellion took to the streets, many of the protesters were “elders”, some of whom locked onto lorries. One 91-year-old rebel glued himself to a DLR train.

The politicisation of the elderly is happening elsewhere, too. In his new book A Brief Eternity, Pascal Bruckner says the success of the Gilets Jaunes (Yellow Vests) protests in France was “explained in part by the active role played by protestors in their sixties and seventies who gathered at roundabouts, finally wrenched away from their solitude and vacuity. These grey-haired anarchists rediscovered for a few months a sense of life”. According to Brucker, the Yellow Vest protests were a kind of “May 1968 for retired people”.

For some, the recent politicisation of older people is a cause for celebration. It means their voices are being heard, their wisdom is being heeded and their power is being reclaimed. For others, the growing political power of the elderly has become nothing more than naked self-interest. Issues retired people care about – house prices, the NHS, state pensions – have been prioritised. Issues which affect those under 60 – education, the environment, decent wages – have been pushed to the side.

[See also: When will we be able to talk about Brexit again?]

But for many grey voters, their politicisation is also relatively shallow. For the retired, politics is something exciting and entertaining to do with their new-found free time. Like gardening, following a football team, or taking a tai chi class, it’s a hobby. 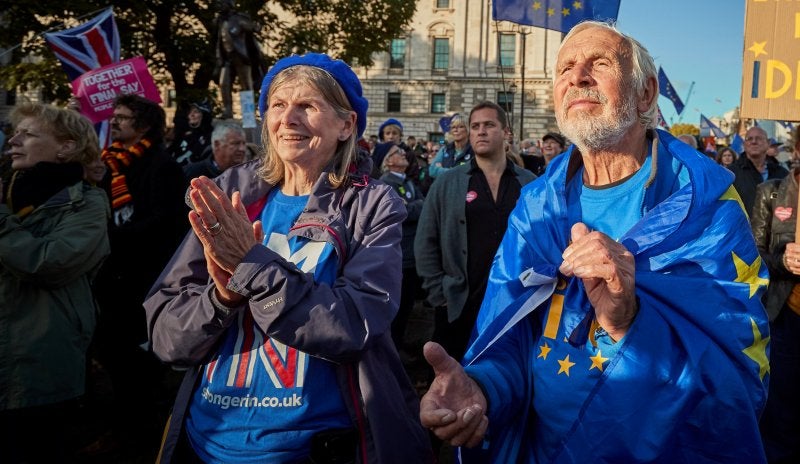 The American political scientist Eitan Hersch describes political hobbyists as people who participate in politics by consuming political news, vociferously commenting about politics on social media and joining a few exciting campaigns. They join demonstrations to have a fun day out with like-minded people. They turn up to local branch meetings to have a good argument. They are exercised by identity issues, nationalism and big ideological conflicts. But political hobbyists find “real” politics – rules, regulations and institutions – boring.

In his recent book, Politics is for Power, Hersch takes a close look at this group. In the United States, he finds that political hobbyists are generally white, college-educated men who enjoy the thrill of an online debate but forego the legwork of door-to-door campaigning or organising. Hobbyists tend to be comfortably off and see politics more as a form of entertainment than a civic duty. The hobbyist dips into high-profile political races, such as national elections, but tires easily of local politics.

Political hobbyism is by no means limited to the old, but Hersh found that hobbyists tend to be concentrated among people with time on their hands, which means both older and younger people. Indeed, Hersch noticed that students on his own campus who are members of political parties tend to treat it more like a hobby than a serious duty. And there are clearly many older people involved in politics who are not hobbyists; Hersh found that women in particular do a considerable proportion of taxing political groundwork.

Does it matter if people treat politics as a hobby? In individual cases, probably not. But when large numbers of people are more interested in having exciting experiences than gaining power, they focus their attention and efforts on polarising political causes. They revel in political debates in which someone gets “owned” or “destroyed”, and only engage with the policies that make a difference to people’s lives if they can be used in these arguments.

Hersch suggests we might learn something from Naakh Vysoky, who lived in a retirement home just outside Boston from 1988 until his death, aged 98. Hersch discovered that Vysoky operated like an old-school political boss within the retirement community in which he lived. Rather than spending his time watching Fox News or CNBC, Vysoky focused on addressing the immediate problems of his fellow residents, such as defining their immigration status or registering to vote. By doing this grassroots political work, Vysoky came to control a bloc of over 1,000 votes in his community. This gave him considerable clout with local politicians and the ability to lobby effectively for issues that directly affected his fellow retirees.

This story has a moral for political parties as well as individuals. The energy of the growing community of politically engaged retirees could be very powerful indeed if it can be channelled away from social media and towards something meaningful, such as organisation, lobbying or the providing basic social services to others in their communities. The future of politics might not be hyper-connected digital warriors after all, but older citizens who can bring their neighbours together.

[See also: What is Entryism, and how does it affect political parties?]