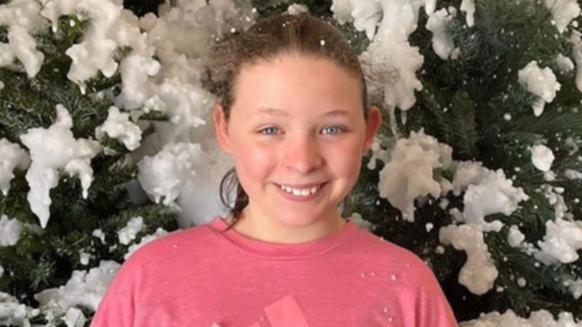 Tasmanian jumping castle victim Jalailah Jayne-Maree Jones has been remembered as a “little mum” who cared for her siblings and classmates, as dozens of family and friends gathered to say goodbye.

The 12-year-old is one of six children who died while enjoying end-of-year celebrations at Hillcrest Primary School on December 16, when a freak gust of wind picked up the castle and several inflatable zorb balls.

Mourners attended a funeral service in Devonport on Thursday, at the same venue where three of her schoolmates lives have been celebrated.

Celebrant Tracey Bruce read out tributes written by family, friends and teachers for Jalailah, who was known affectionately as “JJ”.

A keen dancer, swimmer and kayaker, her mother Rhianna Goodson described JJ as a “little mum” to all of the younger kids in her life.

She was “joined at the hip” to her younger brother and would often sing and create dances with her siblings.

Her grandparents said she was “one of God’s angels and a perfect star”.

“Though our hearts are broken and your life was way too short, we thank you baby girl for all the happiness you brought,” Ms Bruce said, as she read the tribute.

Hillcrest Primary School teacher, Miss Duff, said JJ had an “infectious grin” and brought a spark to her day.

“The love and protection you showed for your family, especially your littler brother, was beyond words,” Ms Bruce said.

“Your classmates couldn’t help but want to be around you.”

Jalailah’s small coffin was adorned in flowers with a single purple balloon tied to it at the end of the service.

It follows the funeral of Peter Dodt in Devonport on Wednesday, whom family and friends remembered as a “little hero” that tried to save others caught up in the jumping castle tragedy.

More than $1.4 million has been raised for the families via an online fundraising page, while the federal government has committed $800,000 to counselling and support for the region.

Devonport City Council is collecting countless tributes left outside the school to create a permanent memorial.

The coroner is investigating the circumstances around the accident and will receive reports from Tasmania Police and WorkSafe Tasmania.