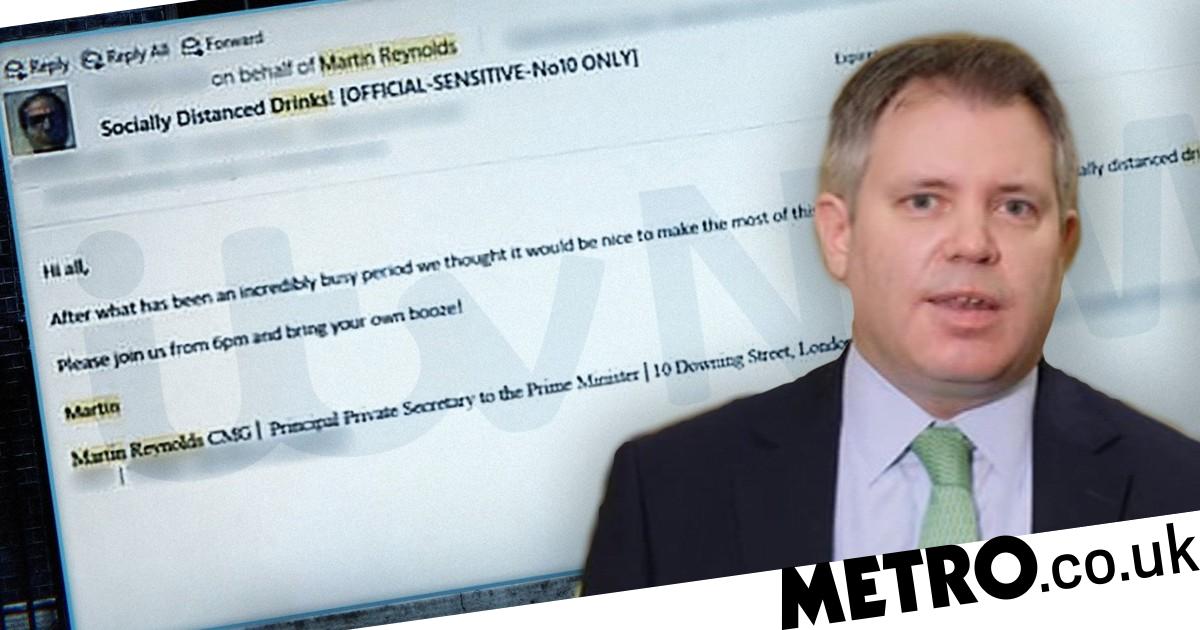 A health minister says he understands people’s upset over claims a ‘bring your own booze’ party was held at Number 10 during the first lockdown.

But still Edward Argar refused to go into any details on the alleged Downing Street gathering, saying: ‘I’m not going to get into any hypotheticals.’

They were encouraged to ‘make the most of the lovely weather’, at a time when people across the country were banned from meeting more than one other person outdoors.

Around 40 people were said to have showed up to the party in No 10’s garden for picnic food and drinks, including Boris and Carrie Johnson.

Junior minister Argar, who says he ‘wasn’t invited to any parties’, was given the enviable task of defending the Government in this morning’s media rounds.

He told Sky News: ‘I can understand that with these allegations people will be upset and angry, which is why it’s right that the Prime Minister asked for that independent investigation to be completed at pace, to get to the facts behind these allegations.’

Argar said he would not ‘pre-judge’ an inquiry led by Cabinet Office official Sue Gray, adding it is a matter for her to establish ‘what actually happened or didn’t happen in Downing Street’.

‘She will come up with her conclusions having interviewed the relevant people, having looked at the evidence and … she will then conclude a) what did or didn’t happen, and then b) whether anything that did happen was consistent with the rules,’ she added.

Asked if he would have accepted an invitation to an alleged Downing Street drinks party during the first lockdown, Argar said he spent May 2020 ‘glued to my Zoom screen’.

He said he was busy making sure he ‘knew what the regulations were’ – not least because he was a ‘health minister who’d helped draw them up’.

Pressed on whether he would have accepted such an invitation, he said: ‘I wasn’t invited to any parties and I’m not going to get into any hypotheticals.

‘I was clear about what the rules were at the time and it’s right that Sue Gray is looking into this matter independently.’

Argar said he might have had a ‘quiet word’ with neighbours if they were having a party during the first lockdown.

Asked if he would have ‘stepped in’ if he had seen 40 people gathering in the garden of Downing Street, the minister said: ‘Well, you’re citing a hypothetical there.

‘I spent most of it sitting, as I say, glued to a Zoom or Teams screen. But I think we all, at that time, we remember what it was like.

‘I think you probably asked me at the time, would I, if I, for example, had people next door or in the street having a party or breaking the rules, what would we do and what would I say? I made clear that I might have a quiet word.

‘But I’m not going to extrapolate from that or be drawn on the allegations at the moment. They’re being investigated by Sue Gray. So, I’m not going to, I’m afraid, get into hypotheticals about that.

‘I think it’s important she has the field clear to do her job, to investigate that, to talk to who she needs to to get that information and reach her conclusions about the facts of what did or didn’t happen.’

Previously, the Metropolitan Police refused to investigate allegations of a Christmas Party at Number 10 held on December 18, 2020.

The force said footage of aides joking about a party was insufficient as evidence and that it had a policy of not investigating ‘retrospective’ breaches of Covid rules.

But now the Met has said it is ‘in contact’ with the Cabinet Office over the leaked email – said to have been sent by Johnson’s Principal Private Secretary, Martin Reynolds.

So far the Prime Minister has refused to say whether he attended a lockdown-breaking party at Downing Street.

He has also denied reports that Mr Reynolds would be moved to another post following the latest claims.

The PM told reporters: ‘All that, as you know, is the subject of a proper investigation by Sue Gray.’

His spokesperson had a similar response, saying: ‘There is an independent process going on to look into this, led by Sue Gray, and I can’t comment further while that is taking place.’