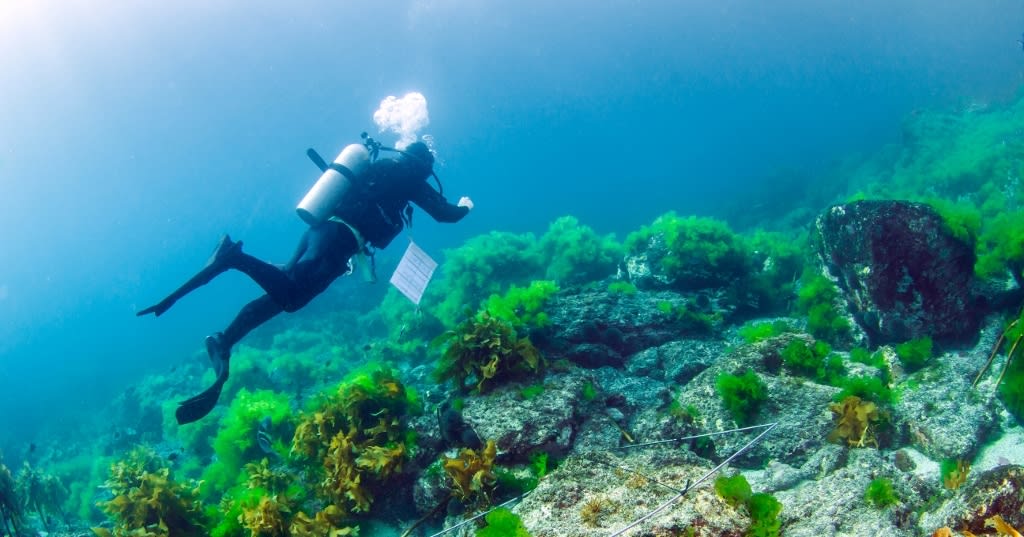 A healthy kelp forest is essential in the fight against global warming’s ‘evil twin’ ocean acidification.

In good times, the Hauraki Gulf was home to swaying underwater kelp forests of the golden-brown Ecklonia radiate, a major building blocks of marine biodiversity, providing food for paua, shelter for young crayfish and baby snapper, and protecting the coastline from erosion.

In bad times, like now, they’re wiped out by out-of-control populations of sea urchins, or starved of the sunlight needed for photosynthesis and growth because pollution has turned the water murky.

“We have to turn the gulf around now,” says Nick Shears, an associate professor in marine science at the University of Auckland. “It’s been too many decades of ‘let’s see what we can get away with’.’”

Shears is investigating a halo effect where healthy forests of seaweed reduce acidity. Saving our kelp may just save the Hauraki Gulf/Tikapa Moana.

Stretching across 4000 square kilometres, the glittering waters, islands, fisheries and beaches have been degraded by overfishing and pollution from the land, including the runoff from agricultural fertilizers. The urgency of the turnaround task was highlighted by the State of the Gulf 2020 report released in February, highlighting declines of 97 percent for dolphins, 86 percent for sharks and 83 percent for snapper, along with devastation of the seabird population since the arrival of humans.

Research fellow Caitlin Blain is tackling one strand of the environmental challenge, conducting experiments in the ocean and in the laboratory to measure Ecklonia radiata’s effect in reducing levels of acidity, potentially providing a refuge for creatures such as oysters, mussels and paua.

The context is a worldwide challenge of adapting to huge changes in ocean chemistry.

A big chunk of the carbon dioxide emissions pumped into the atmosphere since the Industrial Revolution has been absorbed into the world’s oceans. That has dragged down pH, a measure of acidity and alkalinity, to 8.1 from 8.2 in the open ocean, which amounts to a 25 percent to 30 percent increase in acidity.

Under a “business as usual” scenario, where emissions are left unchecked, pH may drop to 7.8 by 2100, the lowest in tens of millions of years. Measurements off the Otago coast show a 7.1 percent increase in acidity over the past 20 years. Data for Auckland, collected off Chelsea Point, averaged 7.95, in readings taken by the New Zealand Ocean Acidification Observing Network.

Shellfish and the likes of tiny shell-making plankton are among the creatures that may be badly affected as they struggle to build their homes from calcium carbonate because of the change in ocean chemistry. The extra carbon dioxide reduces levels of carbonate ions needed for making shells and structures such as coral. Growing a shell may take extra energy, and shellfish may end up being smaller.

It’s early days for Blain’s experiments, but she has already seen some big effects from Ecklonia radiata, a kelp that is prominent in north eastern New Zealand and parts of Australia, and looks a little like an underwater palm tree, with fronds extended from the top of a trunk-like stem.

Like other seaweeds, Ecklonia radiata alters pH by taking in carbon dioxide to photosynthesise during the day, then releases the chemical at night, making for a fluctuating effect but an overall decrease in acidity. In the biggest change Blain’s seen, the pH level rose from a low of 7.8 at night, when a kelp forest was respiring carbon dioxide, to a high of 8.3 to 8.4 in late afternoon on a sunny day when the water was calm. Daily variations can be between 8.05 and 8.15, which doesn’t sound like much, but a small change can make a big difference because pH scales are logarithmic, like the Richter scale for earthquakes.

Blain will be investigating how far the pH effect spreads – possibly 100m or 200m in some cases – and comparing the pH levels in healthy forests with the levels of acidity and alkalinity in adjacent sea urchin, or kina, “barrens” – underwater wastelands overrun by urchins that have wiped out all the kelp.

“Kelp forests can potentially provide areas of refuge for species which are very vulnerable to acidification,” says Blain.

One potential application of the seaweed pH effect is in aquaculture, where growing shellfish and kelp together could help the former thrive by making the water less acidic. Oyster farmers in parts of the United States badly hit by ocean acidification, such as Washington State, have investigated such practices. In New Zealand, the invasive species Undaria pinnatifida (or Wakame), which is especially loved in China and Japan and turns up in miso soup, is one example of a seaweed that might be paired off in such a fashion.

Ecklonia radiata is used in some food products here, such as a kelp salt, and foragers eat it, but it’s not known as a tasty seaweed. Ocean acidification is sometimes called the forgotten evil twin of global warming. Fifty-five million years ago, a much slower acidification event, the Paleocene-Eocene Thermal Maximum, triggered mass extinctions of marine species. Scientists are trying to build a more exact picture of the likely effects of acidification on individual creatures now, with New Zealand’s $560 million aquaculture industry under threat.

Quantifying effects is made more difficult by the interplay between simultaneous changes to marine ecosystems and chemistry from gradually warming water – a feature prominent in New Zealand’s south – marine heatwaves, overfishing and pollution. Australia’s Great Barrier Reef, for example, is vulnerable to acidification, but dying quickly from warming.

The latest research on acidification’s effects on New Zealand coastal species comes from a four-year project backed by the government. Greenshell mussels are vulnerable as embryos but seem “remarkably resilient” and apparently face no “existential threat” in the near future, according to a summary of findings from Coastal Acidification – Rate, Impacts and Management. Experiments suggested mussel farmers may be able to breed larger larvae that may be more resilient to acidification. Survival of paua larvae was “severely impacted” at levels of acidity forecast for the open ocean by the end of the century. Acidification curbed the growth, calcification and metabolism of coralline algae, a red seaweed that can help to bind reefs together. Larval snapper suffered declines in hearing and swimming in laboratory tests

Besides assessing pH levels, Shears and Blain will look into any role the kelp may play in generating so-called “blue carbon”, the process where kelp, mangroves and seagrass can lock up carbon for the long term by storing it in sediment on the seafloor. The sequestration of carbon is a big deal because limiting climate change requires not only reducing greenhouse gas emissions but also removing carbon dioxide from the atmosphere. However, it’s a role that may be limited for Ecklonia radiata because the species clings to rocky surfaces, meaning there’s no sediment for the macroalgae’s detritus to sink into. A limited amount may be transported by currents to the deeper ocean.

Kelp on the dinner plate in a fancy Auckland restaurant and “0800-SEAWEED” advertisements for a firm making seaweed-based concentrates are just two examples of a renewed focus on the macroalgae’s potential, from food to medicine to biofuels to agriculture. Southeast Asian countries dominate seaweed farming but New Zealand iwi, energy and fishing and farming companies are all looking at the possibilities.

In the acidification experiments, Blain and her colleagues don scuba gear to put pH monitoring devices called SeaFets in and around kelp forests just outside the Goat Island marine reserve at Leigh. They’re also enclosing kelp in devices called photo-respirometry chambers for more controlled experiments in the laboratory and in the sea – think of a single kelp that’s been “bagged”.

One of the larger contexts for the scientists’ research is a worldwide crisis for kelp.

The seaweed covers about 25 percent of the world’s coastline, but its abundance has declined by about 2 percent per year over the past half century, according to a report on oceans by the Intergovernmental Panel on Climate Change, which cites ocean warming, marine heat waves, pollution – and also those aggressively hungry urchins. Urchin barrens at the gulf’s Mokohinau Islands can sprawl over as many as 40 hectares, the scientists say.

In previous work, Blain has shown the dismal effect that “turbidity”, the clouding of the water from sediment and pollution, has on kelp in the gulf. The murkiness inhibits growth – or even prevents kelp from growing at all. Farming, logging and land development all play a role and climate change may amplify the effect as coastal erosion and runoff from the land increase because of rising seas and storms.

One of the most polluted zones of the gulf, the Firth of Thames, south east of Auckland, is giving a taste of the ocean acidification of the future. The Waihou and Piako rivers flow into the firth, carrying pollution such as nitrogen and phosphorus after passing through land used for intensive dairy farming. Readings of as low as a pH of 7.7 were recorded after pollution triggered phytoplankton blooms that altered the chemistry of the water, according to a 2018 paper in the New Zealand Journal of Marine and Freshwater Research. That’s more acidic than the pH forecast for the world’s open oceans by 2100 if carbon dioxide emissions continue unchecked.

Snorkelling at the marine reserve at Leigh gives the scientists a glimpse of how a revived gulf might one day look, as big snapper and smaller fish dart through clear water and thriving kelp.

For Shears, saving the gulf means doing the things that will have the biggest impact quickly, like stopping overfishing. For Blain, tackling climate change “obviously means reducing emissions,” but focusing on small solutions within the overall challenge “can get us closer to where we need to be”.