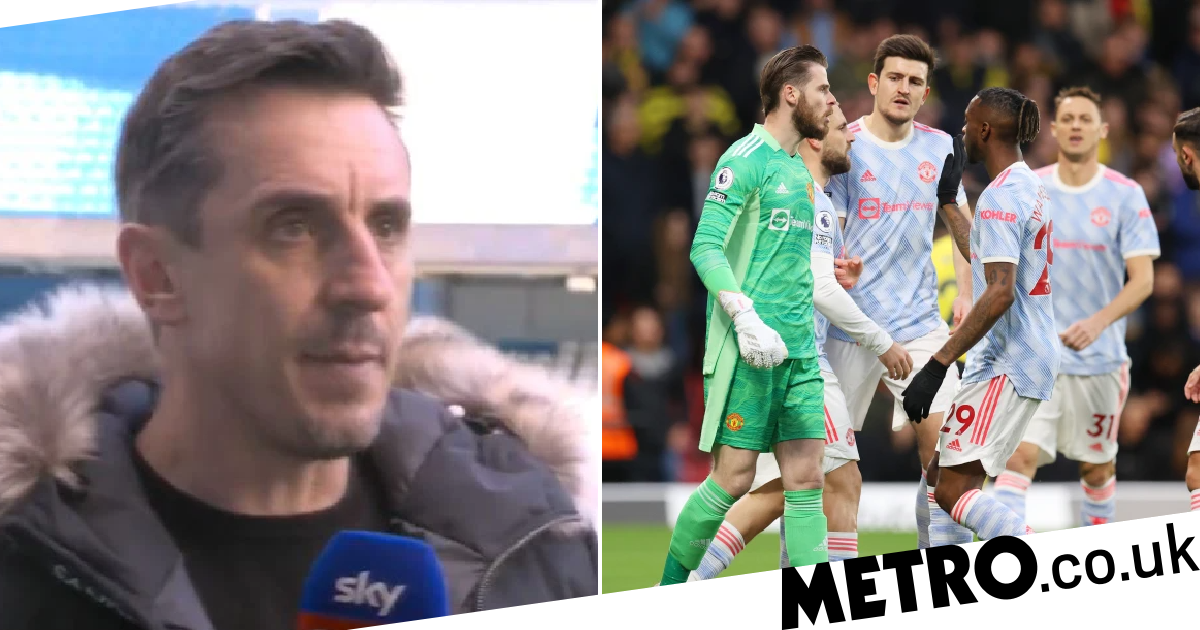 The Red Devils suffered a 4-1 defeat at Watford on Saturday that resulted in the Norwegian being given his marching orders on Sunday morning.

United conceded several sloppy goals with David de Gea coming in for criticism for not doing better with some strikes while the defence was static at times.

Harry Maguire endured another poor afternoon for his club and was sent off after two yellow cards in quick succession with the second a late challenge after he failed to control the ball.

Neville has defended Solskjaer throughout his recent struggles and once again took aim at the defenders and De Gea for another poor display that proved they looked ‘drained of confidence.’

‘It’s been coming for the last few weeks. The performances have been terrible, the results have been shocking. Yesterday was a wimpish performance at Watford,’ Neville said.

‘I think you’re always hoping that the players would respond and the international break would bring some refreshness but it looked like they had the world on their shoulders.

‘Their performance levels over the last few weeks have dipped and when a manager can’t get a performance out of his players and the results are getting as bad as they are then in this game you’re going to lose your job.

‘The team have looked all over the place. I didn’t see the game yesterday but I saw the highlights.

‘Some of the goals… the defending is absolutely woeful, the keeper, the defenders – and that’s a back four, back five, that have played together a number of times.

‘Watford aren’t the best team by a long stretch but they got mauled Manchester United.

‘Ole couldn’t get a performance out of them in the end. The players look drained of confidence and I’m not surprised today that it’s ended.’

Michael Carrick has been announced as United’s temporary manager in charge while they carry out their search for Solskjaer’s interim replacement.