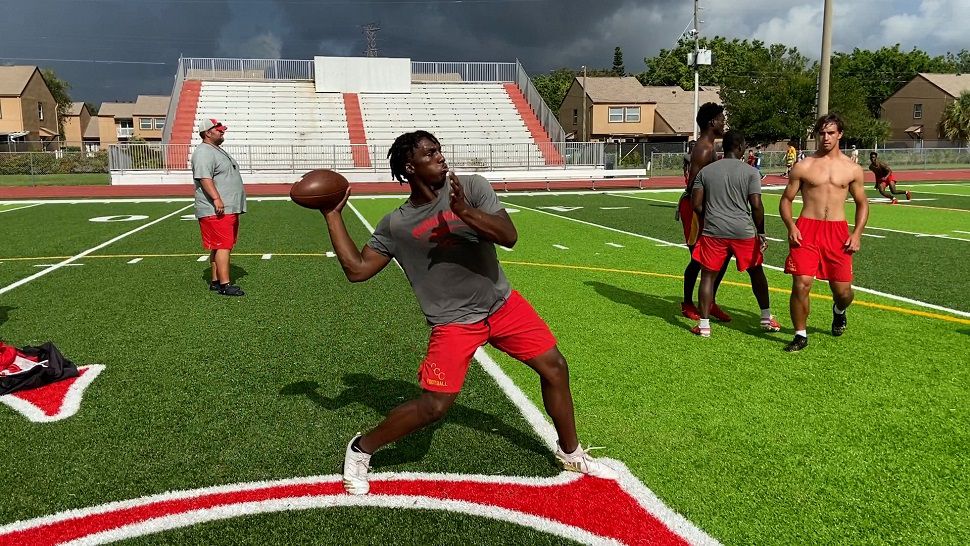 CLEARWATER, Fla. — For the last nine years, the name Newton has been synonymous with Clearwater Central Catholic football.

Sophomore Quarterback Jershaun Newton is the last of five Newton brothers to play for the Mauraders.

For Jervon Newton and his wife Jovita, it all started back in 2013 when the twins Jervon and Jerquan began this family legacy in Clearwater. They were followed by Jerjuan, Jerzhan and the youngest Jershaun.

When head coach Chris Harvey took over the Clearwater Central Catholic Program in 2016, he had four Newton brothers playing for him and it didn’t take him long to realize what this family was all about.

“The Newton’s have always been our best players, per say, you know they’ve always been grouped at the top. A bunch of talented players we’ve had here,” Harvey said.

Jershaun has been around the Marauders program since he was 8-years-old, acting as the teams water boy. He said he always wanted to be on the sidelines with his older brothers and not in the stands watching with mom and dad.

Now, he represents the last Newton standing at CCHS and he may just leave as the best one to ever play at the school — at least that’s what his dad thinks.

Now the fifth and final Newton begins to create his own football path with a chance to leave not only his mark on the program but add to the family legacy as well.

“I want to break a lot of records, and basically, I want my brothers to know that I played better than them,” Jershaun said.

But his head coach thinks even bigger.

“If we’ve ever had a shot to win a state championship here, it will be because of what he brings and what those guys around him can do,” Harvey said.

Jershaun has three years to prove all of his supports right.