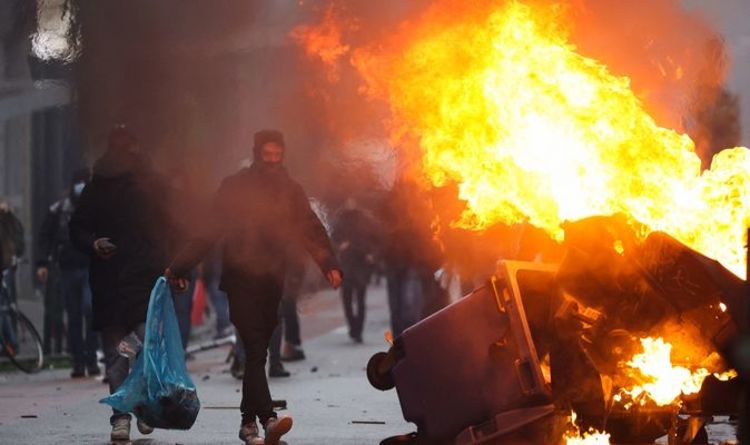 Last week, the World Health Organisation warned the continent was the epicentre of the pandemic and said the rise in cases was “alarming”. They nudged governments to reimpose measures ahead of the Christmas period.

After protests erupted in the Netherlands on Friday and then in Austria on Saturday, more demonstrators took to the streets on Sunday.

More than 40,000 people took to the streets of Belgium to protest against the return of strict lockdown rules.

Protesters marched in Brussels in response to the new anti-Covid measures banning the unvaccinated from entering restaurants and bars.

The demonstrations turned violent as protesters were seen throwing projectiles at riot police – who responded by firing a water cannon and tear gas at the group.

There were some confrontations between demonstrators and police, with protesters throwing smoke bombs and fireworks, the newspaper Le Soir reported.

This protest came hours after Germany announced it will follow Austria’s example to make vaccinations compulsory.

German ministers admitted the move is “unavoidable” as the country sees a new wave of infections.

Germany recorded its highest infection figures since the start of the pandemic last week.

On Saturday, protesters in Austria clashed with police as they mocked government leaders such as Mr Schallenberg and Health Minister Wolfgang Mueckstein.

Police were pictured arresting two protesters but have not confirmed how many people have been detained at the Vienna demonstration.

Vaccinations in Austria have plateaued at one of the lowest rates in Western Europe – under 66 percent.

Hospitals across the country have warned their intensive care units are reaching capacity.

Violent riots also erupted in Rotterdam on Friday night after thousands of anti-lockdown protesters gathered on one of the city’s main shopping streets.

Dutch police fired water cannons, “warning shots” and bullets at protesters to disperse the crowds and set off fireworks.

Police confirmed seven injuries, including officers, in the violence but did not say whether live ammunition or rubber bullets were fired.

This protest came after the Netherlands re-imposed some lockdown measures last weekend for an initial three weeks in a bid to curb the spread of the virus.

Mayor Ahmed Aboutaleb told reporters that “on a number of occasions the police felt it necessary to draw their weapons to defend themselves”.

He added several officers and protesters were injured in the violence.

France has also warned of a fifth wave as cases continue to rise at “lightning speed”.