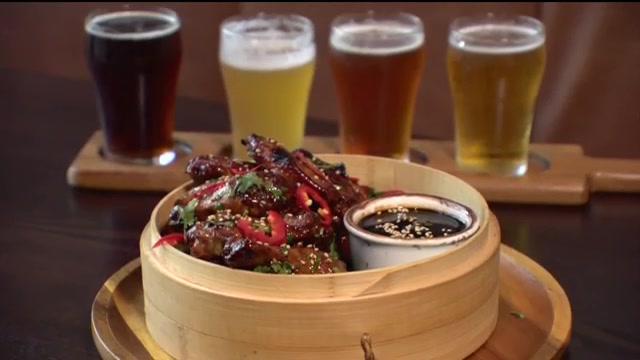 National Beer Day. It makes you’re feeling further patriotic, doesn’t it? Thursday marks the special day, and we all know simply where to take your buds for some suds, or even beer-infused meals, at vacation costs. So let’s come in combination as Americans!

Todd Space, EST.33: “You start getting into pairings with food and all the things that can happen, it’s almost more complex than wine sometimes.”

And, no less than one eating place in Miami…

Todd Space: “We’re on the fourth floor of the Brickell City Centre. Sounds like a strange place for a brewery, but that’s where we’re located.”

Is celebrating April seventh find it irresistible’s a federal vacation.

Todd Space: “Have a beer, get some wings or go for the full experience of the menu.”

Todd Space: “We have this amazing kitchen. We have amazing chefs behind the counter.”

Todd Space: “My wife encouraged me, and she was like, ‘You love craft beer. You should look at doing something with it.’”

Like cooking particular menu pieces with beer, at particular costs, via Sunday.

And, a lager flight — duh — that includes…

Todd Space: “We’re going to have a sake beer called Tsunami, which is – yeah, I think I’ve said enough already.”

On Thursday, he’ll also be giving excursions, each and every hour, at the hour.

Todd Space: “You’ll go behind the scenes, and I’ll walk you through the entire process of making beer. This is our density meter. It reads the sugar content of the wart. This is a pH meter. it reads our pH.”

Alex Miranda: “OK, but which device reads the alcohol content?”

Those who aced chemistry magnificence can skip this phase.

Sean: “You can always add…”

Hate to wreck it to ya.

Sean: “Alcohol cooks out with heat.”

What’s left is simply the flavour.

Parnia Mehrsa, buyer: “I’ve never tasted anything like this. It was delicious.”

But we’ve were given a math downside. Four beers, 4 prawns, 5 folks.

Alex Miranda: “Look over there!”

Don’t thoughts if I do.

Copyright 2022 Sunbeam Television Corp. All rights reserved. This subject material might not be printed, broadcast, rewritten or redistributed.