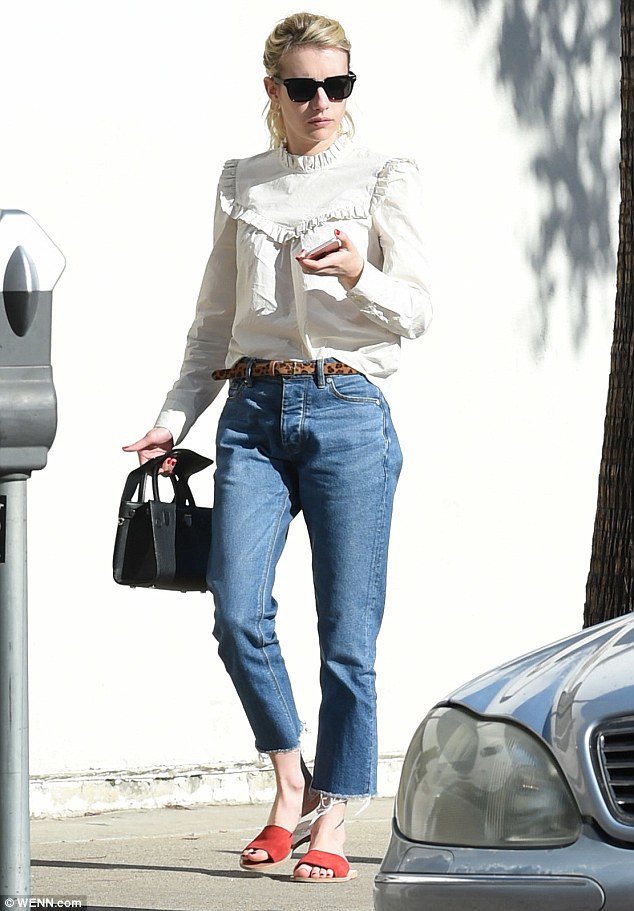 Gourmet food to go! Emma Roberts looks chic in ruffled top as she picks up goodies from Joan’s On Third in LA

For most people, Sundays are the one day of the week to unwind and relax.

However, for Emma Roberts, the busy actress was headed to work on her Sunday afternoon, first making a pit stop at the popular Los Angeles restaurant, Joan’s On Third.

The 25-year-old niece of Julia Roberts looked effortlessly fabulous in an off-white ruffle top, cropped blue jeans and trendy red flats as she grabbed some food for the road.

Always on the go: Emma Roberts stopped by popular LA restaurant on Sunday, Joan’s On Third, as she donned a casual and chic ensemble

The Scream Queens star ditched her alter ego of villainous sorority president Chanel Oberlin and went back to basics.

Emma looked stylish nonetheless with her top tucked in, showcasing her leopard-printed belt, and donned her black leather purse.

The Nerve star pulled her blonde locks back in a loose ponytail and covered her make-up free face with black designer shades as she headed to her car. 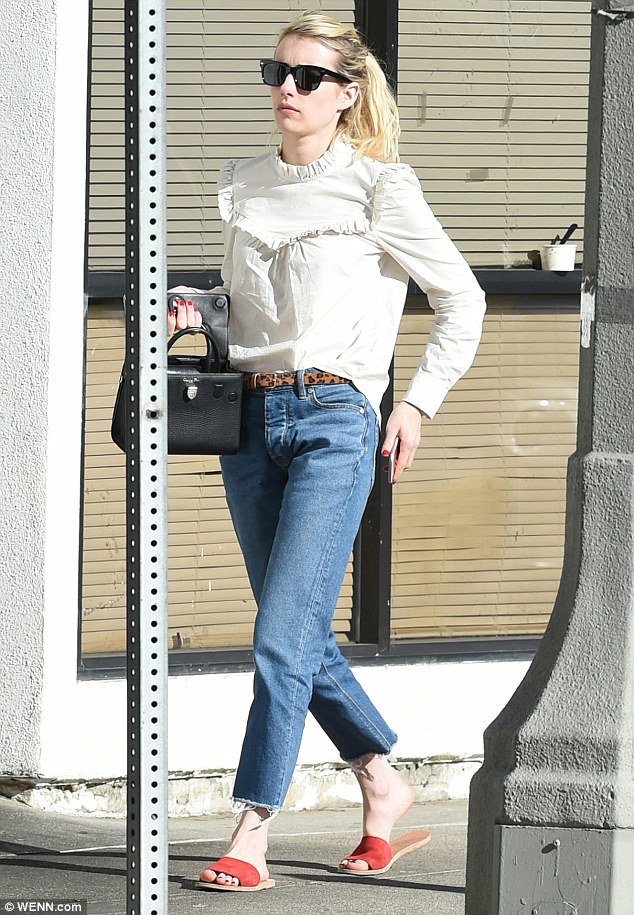 Effortless: The 25-year-old star opted for a cream-colored ruffle top, tucked into a pair of cropped denim jeans and topped it off with red flats 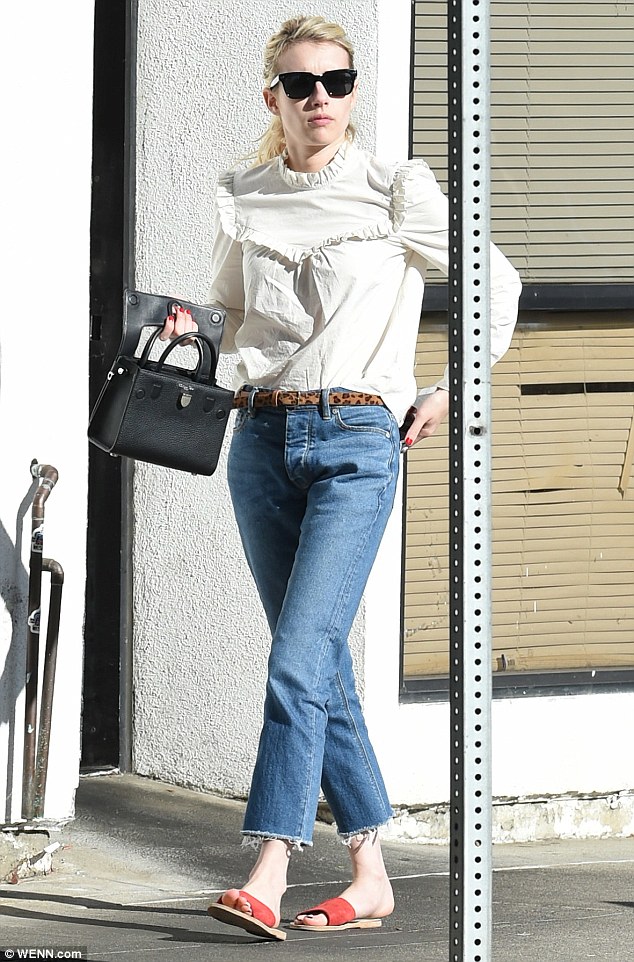 Cool and casual: The Scream Queens star pulled her blonde locks back in a ponytail, paired with black shades and a matching leather purse 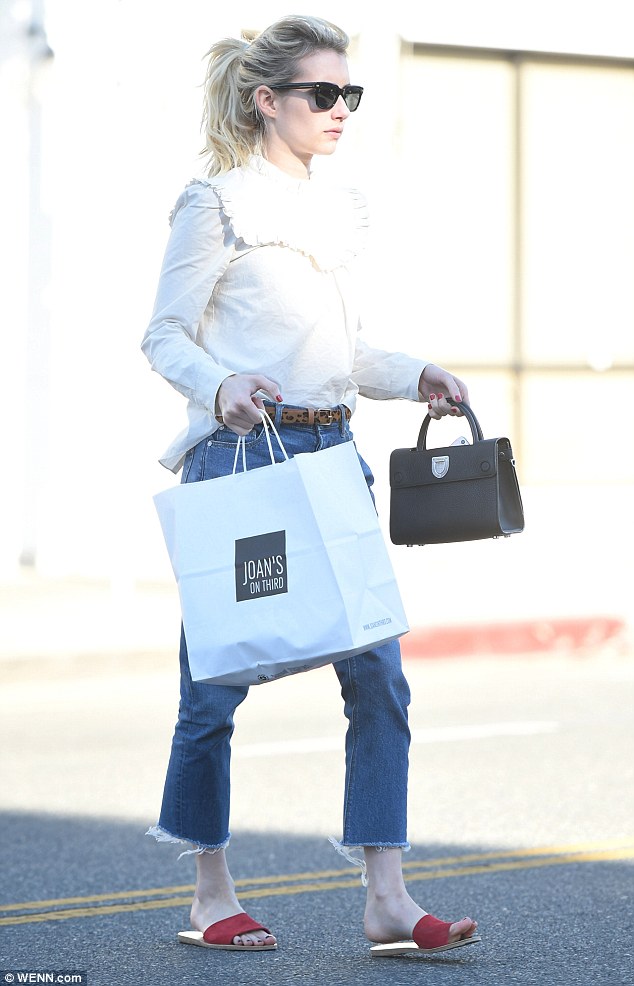 Food for the road: The niece of Julia Roberts made a pit stop for food before heading to work

Shortly after, the actress shared a photo to her Instagram posing with Suki Waterhouse and Scream Queens co-star Billie Lourd who will be appearing in the upcoming film with her, Billionaire Boys Club.

Emma captioned the photo: ‘The only people who could make me excited for work on a Sunday @sukiwaterhouse @praisethelourd #billionaireboysclub.’

The film – based on the real-life Billionaire Boys Club in Southern California during the 1980s- also stars Ansel Elgort, Kevin Spacey, Judd Nelson. It is directed by James Cox and co-written with Captain Mauzner. 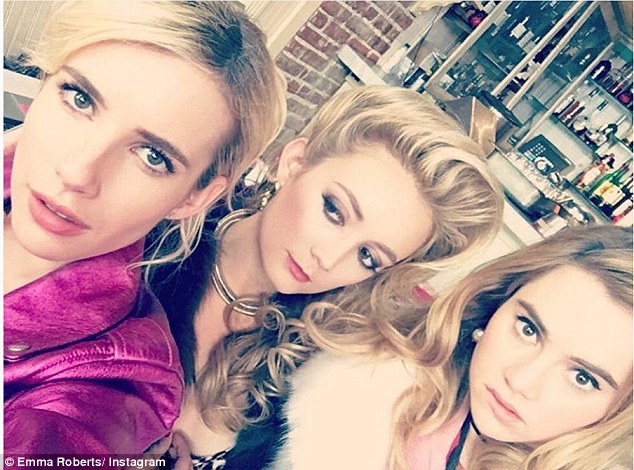 Girls club: Emma shared this photo to her Instagram on Sunday with the caption: ‘The only people who could make me excited for work on a Sunday @sukiwaterhouse @praisethelourd #billionaireboysclub’

Meanwhile, Emma has been keeping busy also filming her FOX show and spending time with her now on boyfriend, Evan Peters.

The two have broken up, gotten engaged, broken up again, and have just recently rekindled their roller-coaster romance again in early October. 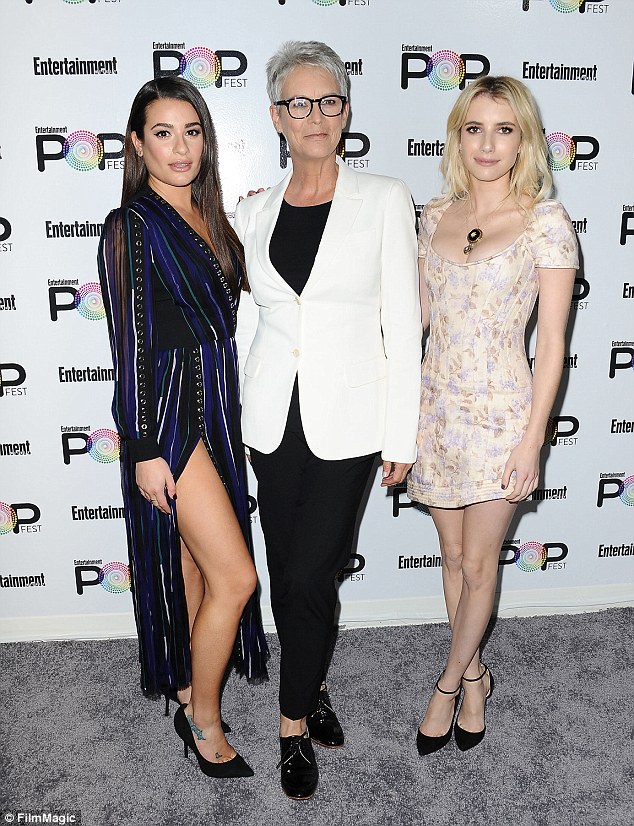 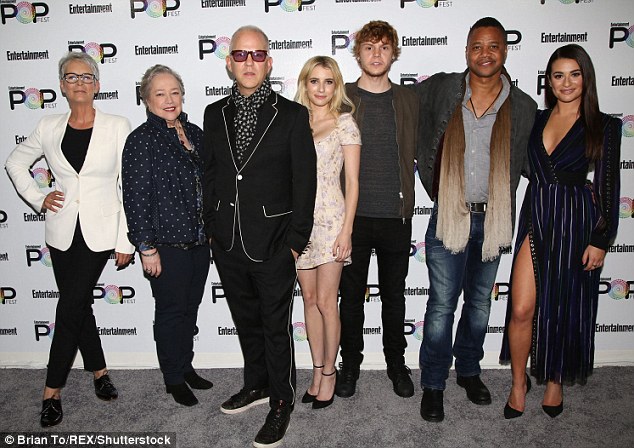 Together again: The actress posed with her on-and-off boyfriend Evan Peters at the Popfest event last week