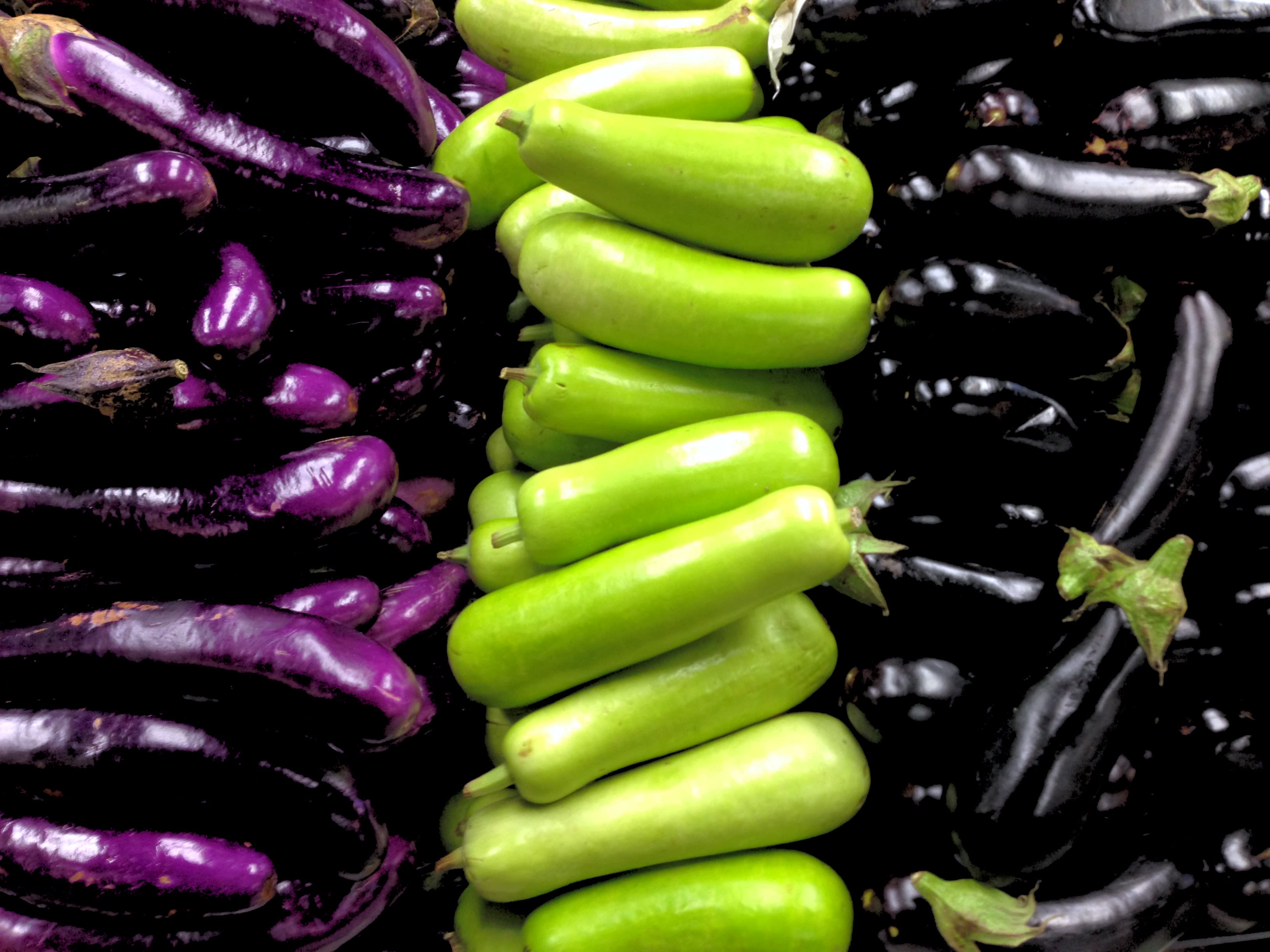 Why’s an eggplant named after an egg? Why have they only been commonly used in NZ for a generation or so? And how best to savour them? Pat Baskett offers some answers.

Eggplants, their glossy purple bulbs now ubiquitous in greengrocers, arrived here little more than a generation ago. Without them, we had lived on meat and three vege (one white, one green and one yellow) until their advent, with capsicum, bok choy and the other non-English novelties we enjoy now.

Eggplant, or aubergine, (Solanum melongena) has a long and ancient history that stretches across northeast India and Asia. They also come in a variety of shapes and colours. Last year I grew a dwarf plant with frilly leaves the label of which advised me to eat the small pale green fruit raw, like apples.

They had little to recommend.

In Africa a different species (Solanum macrocarpon) includes one that is startlingly scarlett. The name, eggplant, is a legacy from colonial India.

One of the most common varieties in that period had white egg-shaped fruit and it’s this description that the linguistically challenged colonists picked up and applied generically.

In an Indian restaurant here you might find it called brinjal. In its homeland it could well be striped.

The French word which we use with ease is derived via Catalan Spanish from the Arabs who brought the plant to Europe – with their intellectual offerings, in the 7th and 8th centuries.

Suspicion often accompanies new foods and eggplant had its detractors, as some of its names show. The Italian version, melanzana combines apple (mela) with mad (insana); in Greek this is melitzane. In Renaissance times in Europe it had a reputation for causing melancholia or depression, digestive ailments, uterine problems and “hot-bloodedness”. Aphrodisical properties were also attributed to it.

The English were extremely wary. A late 16th century herbalist gave this warning: “Doubtless these apples have a mischievous quality. The use thereof is utterly to be forsaken.”

These effects were attributed to its bitterness and pungency and explains why some recipes still advise salting the slices and leaving the juices to drip out. The only real advantage to taking the time to do this is if you’re worried about the amount of olive oil they absorb when fried.

Now we know that only advantages are to be gained by indulging in this super fruit as often as our taste buds allow. Eggplants contain vitamins C, B6 and K, and magnesium, phosphorous, some copper, folic acid, potassium, and manganese. A cup of cooked flesh weighing 96g contains around 2.4g of fiber. They’re also a good source of antioxidants and are low in calories.

What more can you ask?

This recipe is particularly satisfactory and useful when courgettes are numerous, eggplants cheap and the chooks are laying well. I don’t know its origins. My thanks to whomever gave it to me.

2 large courgettes, coarsely grated, salted and left to drain in a colander

Zest of a lemon

Spices to taste. I suggest one teaspoon of smoked paprika or allspice (not both). Some chilli?

Spread the eggplant slices on an oven tray and dribble a good dessertspoonful of olive oil on each. Roast till golden, 20-30 minutes. In the last five minutes, roast the nuts. Then leave the slices to cool.

Meanwhile, fry the onion briskly till not quite burnt. Just before you turn it off add the garlic and spices and stir through.

Squeeze the liquid out of the courgettes (you should have about 200g) and place them in a large bowl.

Prepare a 21cm cake tin with baking paper. Take the eggplant slices and arrange them in a spiral on the base of the tin. Spares can go up the sides.

Now whisk the egg whites and gently fold into the bowl, then ladle the mixture into the cake tin, on top of the eggplant slices.

Bake the cake for 30-45 minutes, till just brown, then leave it to cool. When you can handle the tin place a large plate over it and invert it so that the eggplant slices are elegantly glistening on top.