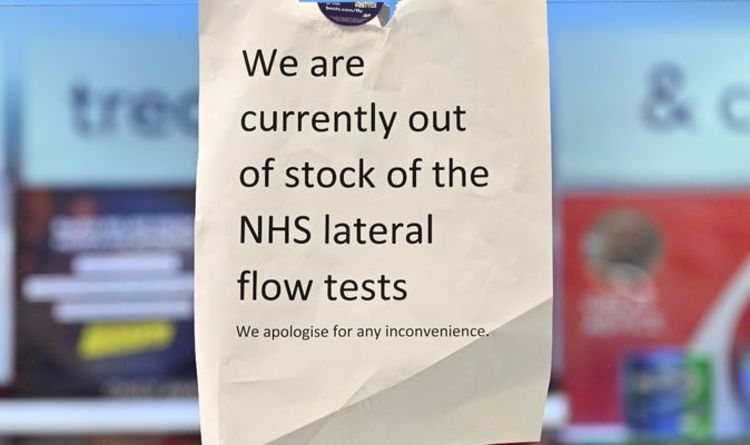 The United Kingdom is facing a shortage in supply of testing kits. On December 30, many Brits were even unable to order home delivery slots for lateral flow tests from the Government website. Access to testing kits was so low in England that Wales announced it would loan four million lateral flow tests shortly before New Year’s Eve.

But Leyla Hannbeck, chief executive of the Association of Independent Multiple Pharmacies, claimed the crisis could have been avoided if there had been better planning.

Speaking to the i, she said: “I raised this with the UKHSA (UK Health Security Agency) in early December saying a lot more kits would be needed asking what its plans are but they never answered my question.

“The problems around demand should have been anticipated.

Ms Hannbeck also argued the introduction of new COVID-19 rules have led to a surge in demand for testing kits.

JUST IN: Sadiq Khan clashes with Boris Johnson over plans to begin decriminalising drugs in London

The UK Government brought in measures to enable people to leave self-isolation after producing two negative tests – on day six and again on day seven.

She added: “It’s the planning ahead which was not done.”

Ms Hannbeck also called on the Government to increase the number of testing kits made available.

“In order for us to manage this we are going to have to see at least triple the amount of test kits the Government has made available,” she said.

“We have got staff suffering abuse, people walking in and shouting,” Ms Hannbeck revealed.

A spokesperson from the National Pharmacy Association added: “We ask the public to please be patient and courteous with our colleagues, who are doing their utmost, under extreme pressure, to support patients at this time.”

The UKHSA, which is responsible for protecting every member of every community from the impact of infectious diseases and other health threats, said eight million test kits have been delivered to pharmacies in the last week.

A spokesperson claimed: “The UK’s testing programme is the biggest in Europe with almost 400 million tests carried out since the start of the pandemic.”

However, the UK is not the only place which has witnessed a shortage in Covid testing supplies.

Pharmacies and shops on the other side of the Irish Sea are reported to be experiencing significant shortages in antigen test supplies.

Darragh O’Loughlin, who serves as secretary general at the Irish Pharmacy Union, warned resources were “very low” and even claimed some suppliers are out of stock.

Mr O’Loughlin told the Times: “The global demand has soared and supply is, at least for now, falling short.”