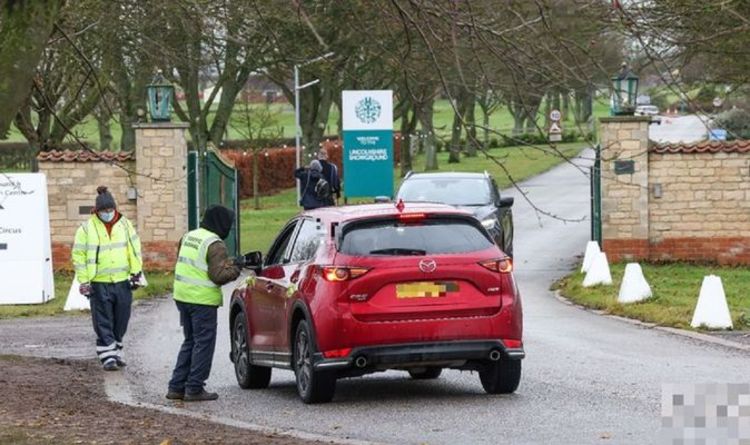 According to a source at the Lincolnshire Showground centre, people used to be able to turn up to the testing centre without a booking. But since December 20, the centre has been turning the “drive-ins” away.

This comes after it was revealed there were no PCR test appointments across Lincolnshire on December 30.

The source claimed there were “kits available” and turning people away leads to staff “twiddling [their] thumbs until a car turns up with a booking as there’s nothing else to do”.

They told Lincolnshire Live: “We’re being told to turn away anyone without a booking even if it’s quiet and even though the government website keeps going down.

“We’re turning away people that are frontline NHS doctors and nurses, police and firefighters.

“No exceptions is what we’re told, regardless of reason.

“Estimated numbers differ each day, though it was around 200 a few days ago easily.

“[People are] upset most of the time, with them telling us they need a test and explaining why.

“We are delivering record numbers of lateral flow tests to pharmacies across the country, with almost eight million test kits being made available to pharmacies between today and New Year’s Eve.

“We have made 100,000 more PCR booking slots available per day since mid-December and we are continuing to rapidly expand capacity – with over half a million tests carried out on 23 December alone and delivery capacity doubled to 900,000 PCR and LFD test kits a day.

“If you have not been able to get the test you need from gov.uk, please keep checking every few hours as more PCR and LFD tests become available every day.”

A total of 174,392 deaths have occurred in the UK where Covid-19 was mentioned on the death certificate, the ONS said.

The Government is under increasing pressure to up the capacity of coronavirus testing as case levels reached their highest level yet.

A new record was set for the daily number of coronavirus cases on Wednesday, as all four UK nations reported their figures for the first time since Christmas Eve.

But at times on the same day, there were no PCR of lateral flow tests available to order online.

Officials acknowledged that during periods of exceptional demand there could be “temporary pauses” in ordering or receiving tests, in an attempt to manage distribution across the system.

The reduced postal system over Christmas has also added to the issues.