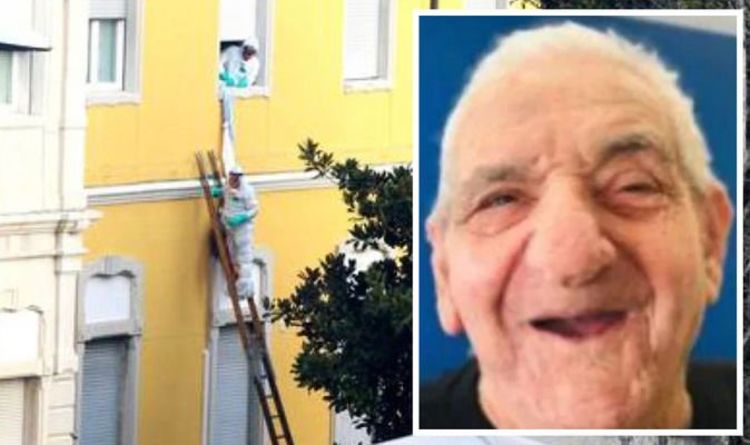 Mario Finotti, 91, was a resident at the Opera Pia Francesco Bottoni retirement home in Papozze, a town in the northern Italian region of Veneto. Mr Finotti tried to escape his first-floor room by tying a bedsheet around his waist and attempting to lower himself out of the window. Carers and friends of Mr Finotti suggest that he could have been trying to escape due to loneliness caused after care home visits were suspended while Italy battles a fourth wave of coronavirus.

The cause of death has not yet been established. Local newspapers report that he may have slipped on his descent causing the improvised rope to pull violently, which could have resulted in a fatal compression of the lungs resulting in his death.

Reports also suggest he may have hit his head swinging into the side of the building or become entangled in the sheets and suffocated to death.

His body was discovered by care home staff at around 6.30am local time on Tuesday, according to local newspaper Corriere del Veneto.

Local prosecutor Francesco D’Abrosca has said no third party is criminally liable for the incident, suggesting that Mr Finotti’s death is not being treated as suspicious.

Mr Finotti had lived all of his life in Papozze, a small town south of Venice, where he was born. He had no children and never married. He had been a resident in the retirement home for around one year before his death.

Luca Avanzi, director of the retirement home, said staff were shocked by the news as Mr Finotti had seemed in good psychological health.

Mr Avanzi told Corriere della Sera: ‘We are shocked by what has happened. Mario Finotti was well, he was not suffering from any degenerative diseases. It is not known what was going through his head because, from a psychological point of view, he was peaceful.

Mr Avanzi added that Mr Finotti’s niece had spoken to a psychologist via video call to discuss her uncle’s health and a “good psychological picture of the elderly man had emerged.”

Care home staff and friends of Mr Finotti have suggested that his escape could have been prompted by loneliness. Visits of relatives and friends have been suspended recently as Italy battles a fourth wave of the coronavirus pandemic, recording roughly 200,000 new cases per day.

Mr Finotti had only been able to speak to his nephews and nieces by phone for the last three weeks, although he had assured his niece he was “fine”.

“The loneliness experienced by elderly people who find themselves a long way from home from their relatives could be relevant in this case,” Mr Avanzi told The Telegraph.

He added: “Nurses and staff cannot take the family place of family. Mario had a sunny personality. But his age and the start of cognitive failings may have contributed to this sad episode.”

The country has registered 142,590 deaths linked to coronavirus since the start of the outbreak in February 2020 – the second-highest death toll in Europe after the UK and ninth-highest in the world.

The vast majority of deaths occurred among elderly people, with almost 85 percent of patients aged 70 years or older.

Italy is currently fighting spiking cases caused by the Omicron variant. However, the country registered nearly 189,000 new cases on Thursday – a drop from 192,000 the day before raising hopes that the latest wave could be plateauing.

The north of the country was the worst hit by the virus, particularly the Lombardy region. The total number of cases reported has now surpassed 7.7 million. Roughly 87 percent of the country’s total population is fully vaccinated as of January 2022.