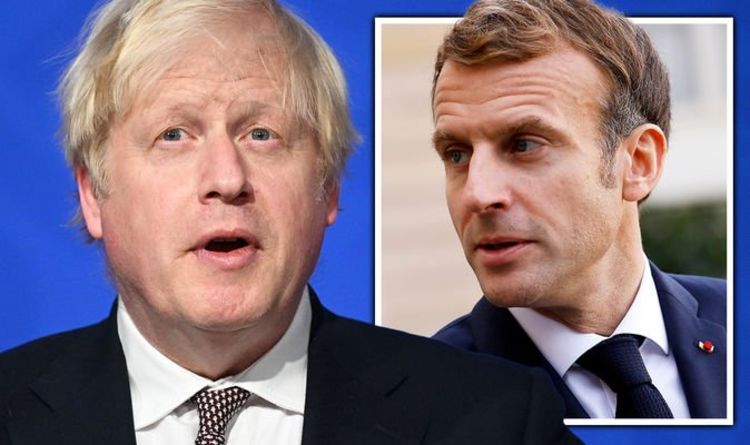 Anglo-French relations have been under enormous strain in recent months with the two nations at loggerheads in relation to post-Brexit arrangements for fishing, migrants seeking to cross the English Channel and the Aukus defence pact between the UK, USA and Australia. Senior aides to Mr Johnson are understood to be working on a new alliance with France exceeding the defence deal signed by former Prime Minister David Cameron in 2010.

If successful, such a team-up could allow Europe’s two most significant military powers to extend their global influence, especially after April’s presidential election.

Areas of possible cooperation could include nuclear testing, mounting a joint carrier strike capability and working alongside one another in the Info-Pacific region.

One Number 10 source told The Sunday Times: “Getting the band back together, kissing and making up, seems to us inadequate for the times we are in.

Significantly however, Mr Macron is also believed to have told Mr Johnson he had been impressed by the seriousness with which Britain was going about its integrated review of defence, security and foreign policy, which recommends forging new alliances with like-minded countries.

Mr Johnson’s advisers are keen for the two nations to go further than simply “patching up” relations – to the point where British soldiers could even lend a hand with France’s peacekeeping efforts in the Sahel region of Africa.

Another Downing Street aide said: “It’s where the two European P5 members [permanent members of the security council], the only two serious ‘out of area’ military powers in Europe, with the same global capabilities and investments, begin to shape things.”

Lord Darroch of Kew, a former national security adviser as well as the former UK Ambassador to the US, said: “We both have serious defence capabilities and aspire to global roles; we are both nuclear powers; and we are neighbours.

“So the case for defence collaboration is irresistible; and it’s understandably something that politicians on both sides reach for when they want to show the relationship is about more than fish and boats in the Channel.”

Relations between Mr Johnson and Mr Macron are understood to have soured after a promising start, especially in the wake of the row over fishing, and Mr Macron’s remarks about the safety, or otherwise, of the AstraZeneca jab developed in conjunction with scientists from Oxford University.

Additionally, Mr Macron ruffled feathers with his apparent suggestion at G7 that Northern Ireland was “in another country”.

The pair also clashed in September over the Aukus pact, with Mr Macron furious at the consequent scrapping of French state-owned company Naval Group’s £40billion contract to build a fleet of conventional submarines.

Mr Johnson is believed to have said: “Donnez-moi un break”, with a diplomatic source explaining: “That didn’t go down well. Macron is a prickly bugger.”