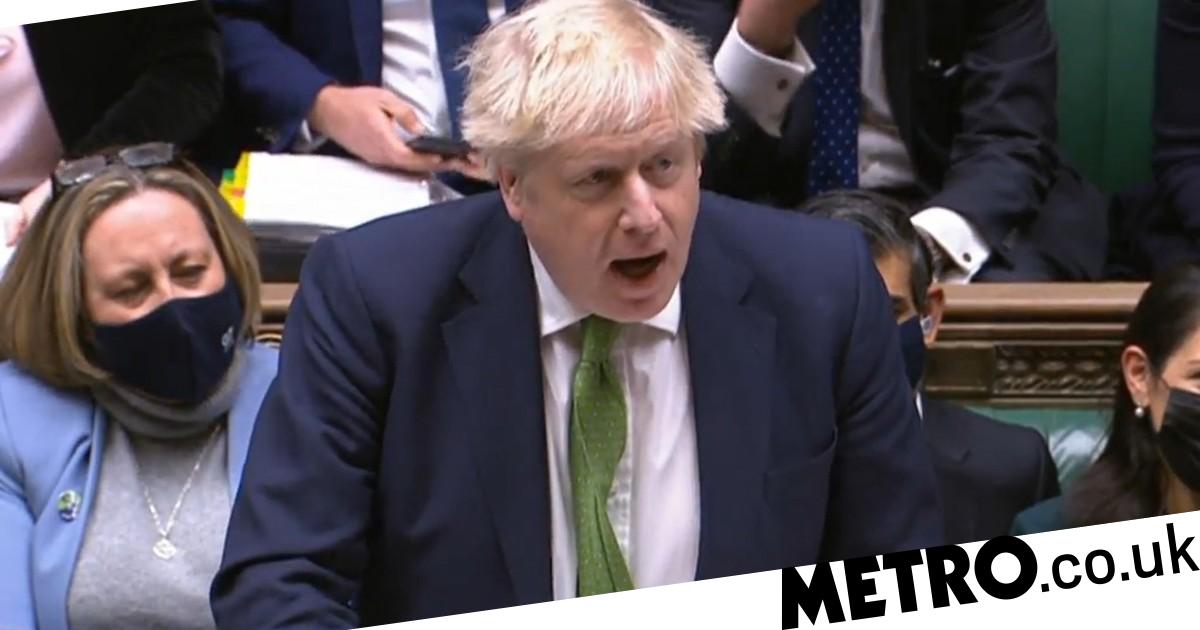 With his political fate hanging in the balance, Boris Johnson has defiantly refused to resign during an extraordinary appearance in the Commons.

The prime minister attempted to launch a fightback as two of his own MPs publicly joined calls for him to quit.

During a savage PMQs, former Tory cabinet minister David Davis rose to his feet to tell Mr Johnson: ‘You have sat there too long, for all the good you have done. In the name of God, go’.

After months of damaging allegations about gatherings in Downing Street during lockdown, there is mounting speculation a vote of no confidence could be imminent.

Number 10 is holding its breath as it awaits the results of an investigation led by senior civil servant Sue Gray which could point the finger of blame at Mr Johnson himself.

He admitted attending a ‘bring your own booze’ event in the Downing Street garden in May 2020 but has insisted that ‘nobody told me that what we were doing was against the rules’.

Bury South MP Christian Wakeford, who was elected as a Tory in 2019, defected to the Labour party in a fresh blow to the PM minutes before he stood up in the Commons.

Wearing a Union Flag mask, he physically crossed the floor at the beginning of the Commons session, taking his seat behind Sir Keir Starmer.

Mr Johnson insisted the Conservatives will ‘win again in Bury South…under this prime minister’ after the shock defection.

Asked by Liberal Democrat MP Wendy Chamberlain if he would resign, the PM replied simply ‘no’, adding: ‘But what I can tell her, as I said to the House last week, I apologise sincerely for any misjudgments that were made.’

During a raucous Commons session where speakers fought to be heard over jeers, Sir Keir said: ‘Last week he said he didn’t realise he was at a party and surprise, surprise no-one believed him.

‘So this week he has got a different defence – nobody warned him that it was against the rules.’

He added: ‘Why on earth does he think his new defence is going to work?’

Ian Blackford, the Scottish National Party’s Westminster spokesperson, piled on the pressure, saying: ‘Public trust is haemorrhaging, with every day that passes this Tory government loses even more credibility.

‘When will the Tory MPs finally do the right thing and show the prime minister the door?’

The PM repeated the Downing Street line that MPs should wait for the investigation to finish before drawing any conclusions – but there are clear signs that unrest within the Tory party is growing.

While Mr Johnson’s frontbench has remained loyal publicly, there are reports of maneuvering and disenfranchisement behind the scenes.

Potential Tory leadership candidates like Rishi Sunak and Liz Truss are said to be positioning themselves ahead of a potential contest if the threshold for a no confidence vote is reached.

It’s unclear how many Conservative MPs have submitted letters of no confidence to the 1922 Committee but some reports suggest dozens may have already done so or be on the verge.

Several Tory MPs elected in 2019 under Mr Johnson’s ‘Get Brexit Done’ banner have reportedly turned on him and are said to have discussed a plan to oust him yesterday evening.

The move has been dubbed the ‘pork pie plot’ because of the alleged involvement of Melton Mowbray’s MP Alicia Kearns.

Earlier today, Armed Forces minister James Heappey – who was previously Mr Johnson’s parliamentary aide – admitted there is public anger in his own patch.

He told Times Radio: ‘I choose to believe what the prime minister has said. But I know that that’s not good enough for many of my constituents.’

Mr Heappey insisted it was possible the PM was not aware of the nature of the gathering before attending and urged colleagues to keep ‘cool heads’.

What is the 1922 Committee and how does it work?

The group, which is formally known as the Conservative Private Members’ Committee, is the body which represents backbench Tory MPs. It acts as a forum for the rank and file to liaise with the government and plays a crucial role in organising Tory leadership elections.

The phrase ‘men in grey suits’, which refers to the Tory big hitters who hold sway in the party behind the scenes, has become synonymous with the committee. Its current chair is Sir Graham Brady.

Under 1922 Committee rules, Conservatives MPs can force a leadership election by submitting letters of no-confidence to the chair. A confidence vote is triggered if 15% of the parliamentary party submit the letters (that works out as 54 MPs). The letters are submitted anonymously and there is no public tally.

If the threshold is reached, a secret ballot of Tory parliamentarians will be held. Mr Johnson would need a simple majority of his own MPs to back him in order to hold on to his position.

Is he lost a confidence vote, the Tories would elect a new leader – and new prime minister – in a race which Mr Johnson would be barred from standing in. It’s unclear if he would remain PM during the election or whether an interim would take the reins while the process played out.

Mr Johnson evaded questions about whether he would resign if it was found he misled parliament over the gatherings during a TV interview yesterday.

He looked visibly shaken while repeating his apology to the Queen for an event which took place in Downing Street on the eve of Prince Philip’s funeral.

Sir Keir pressed Mr Johnson on this apology during PMQ’s, saying: ‘The prime minister has been forced to hand an apology to Her Majesty the Queen. Isn’t he ashamed that he didn’t hand in his resignation at the same time?’

Mr Johnson remained on his feet in the Commons to make a statement announcing the relaxation of Covid-19 rules.

He confirmed Plan B measures like vaccine passports and mandatory mask rules will come to an end and revealed the legal requirement to self-isolate will expire in March.