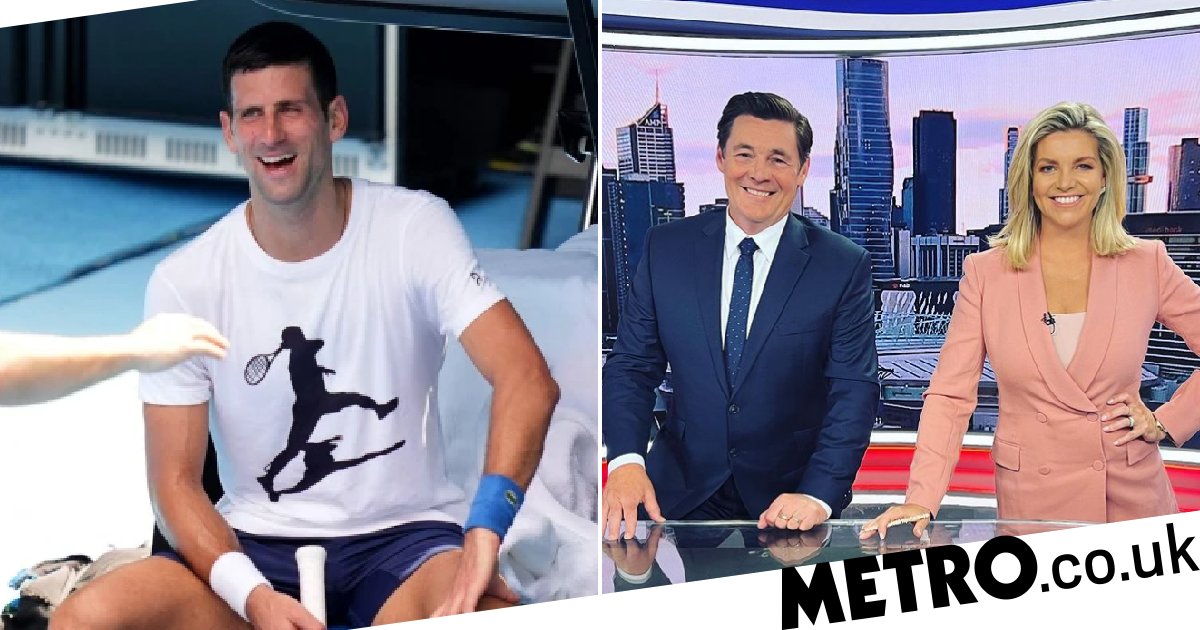 The world number one won a court battle to stay in the country on Monday after Judge Anthony Kelly ruled his visa should be reinstated because he was not given enough time to prove he had an exemption.

Djokovic’s lawyers revealed the Serb qualified for a medical exemption to participate in the Australian Open after testing positive for Covid on December 16.

However, the 34-year-old was seen mingling maskless in the days after his positive result, attending an award ceremony for young tennis players, while his family cut short a press conference on Monday when the subject was raised.

Questions have also emerged about Djokovic’s travel declaration form, with the 20-time Slam champion having selected ‘No’ when asked if he had travelled in the 14 days prior to his flight to Australia despite having been photographed in Marbella on January 2, a week after he had been in Belgrade.

Now two news anchors for Melbourne’s 7NEWS have been caught discussing the controversy surrounding Djokovic during an ad break, with the footage leaked online.

The leaked conversation in full

Rebecca Maddern: Whatever way you look at it, Novak Djokovic is a lying, sneaky a***hole.

RM: It’s unfortunate that everybody else stuffed up around him.

RM: And him now ticking that he didn’t go to Spain, it’s just like…

MA: Yeah, but I think he’s gonna get away with it.

MA: I think most fair-minded people would say the bloke’s an a***hole. Did they do the right thing by him? I don’t know.

RM: I don’t think anything was gained by putting him in an immigration hotel.

MA: No I don’t think so, but the trouble is, how do you justify a person who is on the same plane with him who also has…

RM: He can’t justify it. But the fact is life is never fair. Some people fly first class and some people… do you know what I mean? It’s never fair.

MA: Yeah, but that poor Czech girl that was f***ing sent home, hunted down and sent home.

Rebecca Maddern starts off the conversation by accusing Djokovic of being a ‘lying, sneaky a***hole’ before questioning the legitimacy of his positive PCR test result.

Co-host Mike Amor is in agreement, also branding Djokovic a liar and an ‘a***hole’, before saying he expects the nine-time Australian Open champ to ‘get away with it’ and be allowed to compete at this year’s tournament.

Amor also references deported Czech player Renato Voracova who had her visa cancelled on the same grounds as Djokovic but opted not to stay and fight her case.

Despite being active on social media, neither newsreader has addressed the controversial video clip but the pair have seen their Twitter and Instagram pages inundated with messages from Djokovic’s supporters slamming their conversation.

Djokovic has been permitted to train at the Rod Laver Arena for the last two days though his participation at the Australian Open remains in doubt as Immigration Minister Alex Hawke weighs up whether to cancel the Serb’s visa again.

A spokesperson for the Immigration Minister confirmed the matter is still being deliberated, saying: ‘In line with due process, Minister Hawke will thoroughly consider the matter. As the issue is ongoing, for legal reasons it is inappropriate to comment further.’