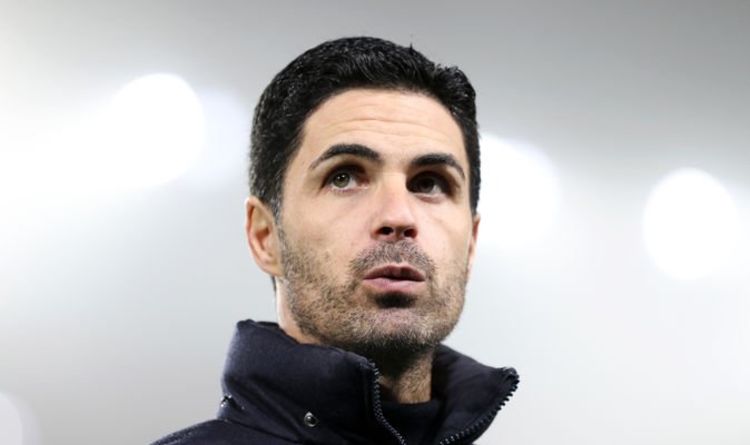 Arsenal manager Mikel Arteta took a fighting spirit into his post-match interview after his side battled to preserve a 0-0 draw with Liverpool despite going down to 10 men in the first half. The Gunners take on Tottenham in a hotly-anticipated North London Derby on Sunday, which could have huge implications in the Premier League’s race for fourth place.

Arsenal looked to be fighting a losing battle when Granit Xhaka’s high challenge earned him a red card inside the first 30 minutes.

Seeing the Swiss receive his marching orders has become an all-too familiar sight for the Gunners, and their makeshift side, made so by injuries and Africa Cup of Nations absences, had to dig deep to stay in the match.

But Liverpool lacked a cutting edge overall with Sadio Mane and Mohamed Salah also at the tournament.

Their only shot on target was reserved for second-half stoppage time, and the Gunners had a handful of chances to snatch the lead in the two-legged tie.

After witnessing his side’s heroics, Arteta took the opportunity to fire a warning to Spurs ahead of Sunday’s fiery showdown.

“We revel against the situation. The players showed great fight, determination, brotherhood,” he told Sky Sports.

“You saw the emotion, we never gave up. Credit to the boys.

“I don’t know if the red card inspired them but it took the fight.

“You need a certain attitude to play in these games and the boys did that. We played the game we had to play, which is not our game.

“I have not seen it [Xhaka’s challenge] back, they checked it so probably a red card.

“To plan with the numbers we have, we don’t have any midfielders, becomes really complicated, because whatever we do is not natural.

“The extra motivation to play a derby [at Tottenham on Sunday] brings the energy when you don’t have it. No excuses, we have to play it.”

Tottenham will go into the weekend’s North London Derby on a less positive note, having crashed out of the Carabao Cup at the hands of Chelsea on Wednesday.

While Arsenal took the game to Liverpool, Spurs were broadly outclassed by Conte’s former employers over the two legs, and the Italian oversaw defeats both home and away.

With a second-leg against Liverpool only a week away, big games are set to come thick and fast for the Gunners who will vie for a spot in the final against Thomas Tuchel’s Blues.