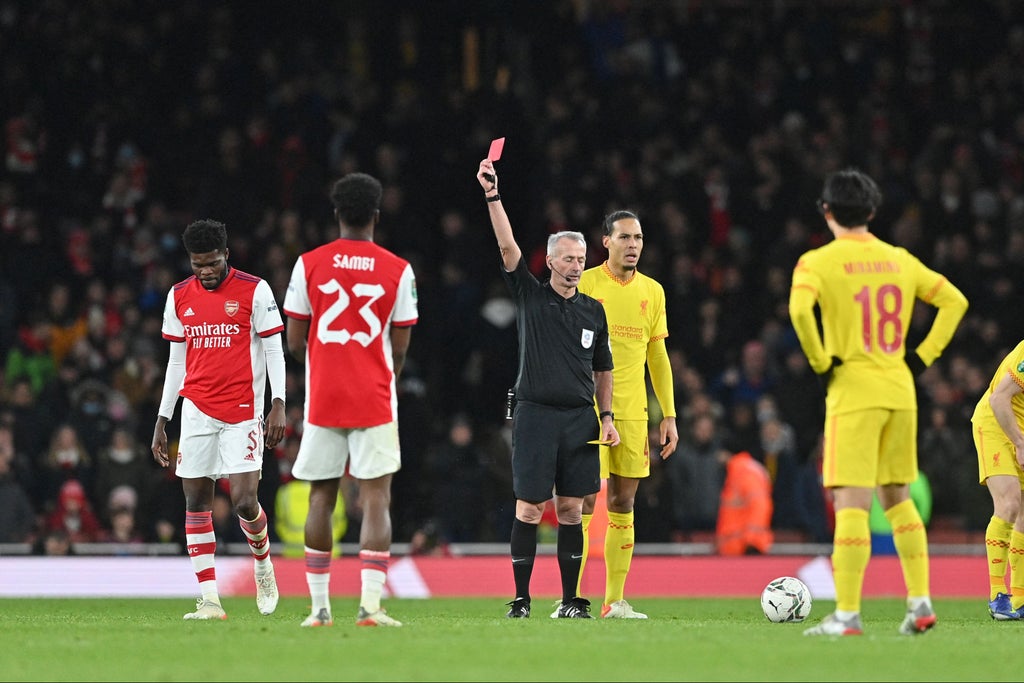 homas Partey says he takes full responsibility for his bizarre sending off in Arsenal’s Carabao Cup semi-final defeat to Liverpool last night, admitting: “I should be more intelligent.”

Partey was rushed back from the Africa Cup of Nations in Cameroon following Ghana’s shock exit at the hand of Comoros on Tuesday, and headed straight to the Gunners’ team hotel after landing in London at lunchtime on Thursday to make himself available for the clash.

Mikel Arteta opted to name the midfielder among his substitutes before sending him into the fray with the Gunners trailing 1-0 thanks to Diogo Jota’s first goal.

However, the Portuguese struck again within minutes to seal Liverpool’s place at Wembley and Partey then compounded a disappointing night with two quick yellow cards.

There was immediate criticism of Arteta’s recklessness in throwing the Ghanaian straight back into action, but Partey has since shouldered the blame.

“I’m responsible for anything that happened and will take all the critiques,” he wrote in a message on his Instagram. “I should be more intelligent not to get in a challenge already booked but this is my personality, I like to fight for every ball.

“I love this club and I love my country even though things sometimes don’t happen how I wanted, I would continue to work harder and make things right.

“I came back with the mentality to make myself available for the team to get to the final. But it did not happen as planned.”

The end result is that Arsenal will now be without Partey for Sunday’s Premier League meeting with Burnley, with Granit Xhaka still suspended after his first-leg red card and Mohamed Elneny still at the AFCON.

That leaves Arteta with Albert Sambi Lokonga as his only fit senior central midfielder, and he will have to choose between starting Martin Odegaard in a deeper role, as he did last night, handing youngster Charlie Patino a start, or asking Ben White to step out of defence to fill the void.

“I will continue to give my all when am on the field of play because this is my life and this is what I chose to to do,” Partey continued.

“Am not happy with all that happened yesterday and at the AFCON but I understand only with hard work things will change so I will continue to work hard to change this. Thanks.”