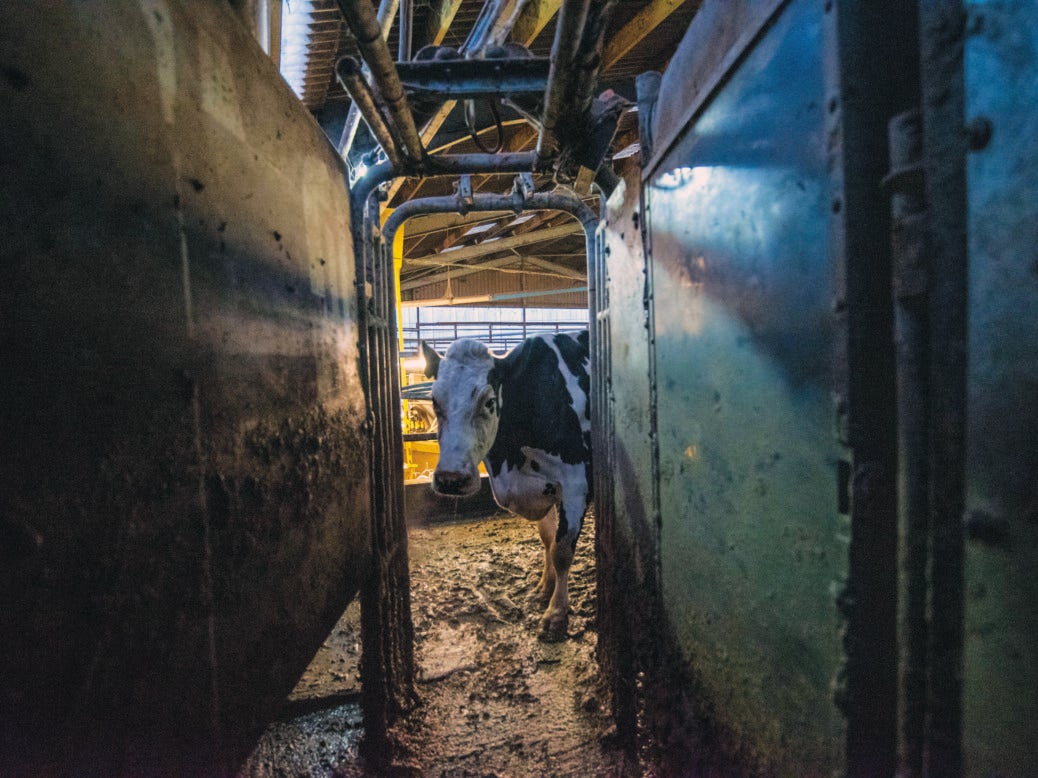 It has taken Andrea Arnold almost a quarter of a century to get from Milk to Cow. She made her debut in 1998 with an unsentimental short film about a woman lactating after a stillbirth. Rather than accompany her husband to the funeral, she takes off with a teenager, has sex with him in his car, and sobs when he drinks from her breast.

Cow, Arnold’s first documentary, covers the same subjects: birth, sex, death, motherhood – and milk. Far from being a departure from films such as Fish Tank and American Honey, which preceded Arnold’s recent stint in US television (I Love Dick, Big Little Lies), the new film contains many of the elements that make her cinema distinctive. It’s the story of a trapped female, in which social realism is cut with an absurdist sensibility. The lives of humans and animals overlap. A newcomer proves to be a natural in front of the camera.

That star is Luma, a dairy cow at Park Farm in Tonbridge, Kent, where Arnold filmed for around 30 days over a period of four years. Like Gloria Swanson in Sunset Boulevard, Luma is ready for her close-up. In fact, the picture is comprised of little else: the cinematographer Magda Kowalczyk is permanently at cow’s-eye level, squashed in with the jostling jumble of tails, udders, fetlocks and hides as the herd is funnelled into mammoth milking barns. At times, she even butts heads with Luma as the beast barges the camera aside, Sean Penn-style. Glimpses of life beyond the farm are restricted to letterbox-shaped slices of the Kent countryside seen through the side of a truck, or shots of distant planes climbing through the sky.

Luma is already a mother of four when she gives birth at the start of the film. As the new calf is yanked free, it opens an unimpressed eye before Luma cleans off its mustard-coloured amniotic fluid with her tongue. Perhaps if she licks this one diligently enough, she will be allowed to keep it. Fat chance. Luma is marched off to be milked, a quartet of nozzles rearing toward her like a yellow rubber Hydra. It isn’t long before calf number five is spirited away, and she is being readied to conceive again.

The obvious point of comparison here – Robert Bresson’s Au Hasard Balthazar, the 1966 account of a donkey on its way to a dismal death – is also a faintly misleading one. Humans are integral to Bresson’s (scripted, fictional) film, with the donkey Balthazar a repository for their love and cruelty who also throws human behaviour into stark relief. The people in Cow are usually faceless and peripheral, given to prosaic asides (“Her uterus is closing down nicely”) and attempts at humour that can sound taunting (“Come on, girlies”). There is talk of getting Luma “cycling again” – a reference to reproduction rather than mountain bikes.

Where Balthazar had Schubert as the soundtrack to his suffering, Luma’s only accompaniment is the tinny transistor pop that jangles through the yawning metal hangars. It would not be unreasonable to wonder if the poor creature has a Pavlovian response to this, her exploited udders quivering at the mere sound of Radio 1. More effective than the use of Garbage’s plaintive “Milk” over the end credits (a bit too on-the-nose, that) are the stray musical snippets that drift through the farm, such as the Soak number (“Everybody wants you/ Everybody loves you”), which feels positively sarcastic under the circumstances.

Regardless of Arnold’s aim to resist anthropomorphism, it will be impossible for any audience to spend 90-odd minutes in Luma’s company without reading emotion into her expressions or the noises she makes: the slow blink; the remorseful or accusing stare; the lowing after her calf is snatched, which must surely be grief. Her patterning resembles a Rorschach test – is that a black tear under one eye, and an inky X on her nose like a smudged kiss? – and the film may work on viewers that way, too. Any cruelty shown is industrial and generalised; the film is very much not a campaigning exposé in the mould of the Joaquin Phoenix-narrated documentary Earthlings. Even without narration or overt editorialising, though, its message is clear. We leave the film convinced that to condemn a living creature to this wretched life means condemning ourselves also.

“Cow” is in cinemas from 14 January, and streaming on Mubi from 11 February