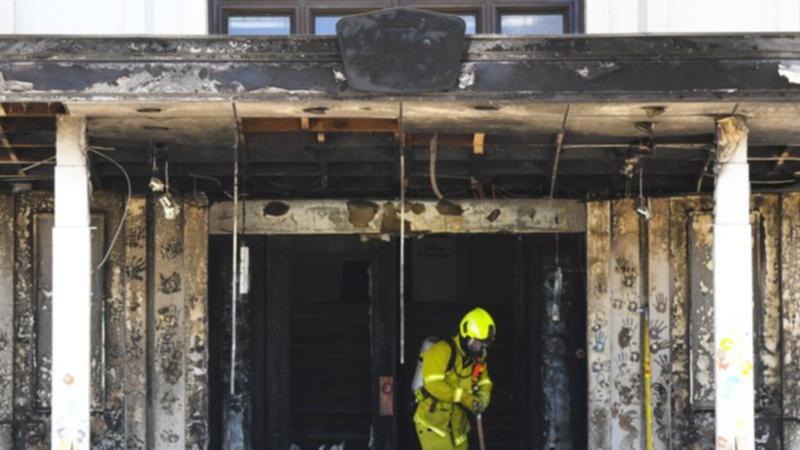 The Aboriginal Tent Embassy has condemned the actions of protesters which led to a deliberately lit fire burning the doors of Canberra’s Old Parliament House.

Protesters have been outside Old Parliament House for more than a week and began a traditional smoking ceremony on Thursday.

Watch Old Parliament House up in flames in the video above

Commander Linda Champion from ACT Policing said officials agreed to the small smoking ceremony as part of the peaceful protest but it became “a little bit out of hand”.

“When ACT police went to respond, that’s when it was greatly escalated,” she said.

“If there is peaceful demonstrations, we fully support that.

“If there is any criminal activity, we will be taking action.”

Commander Champion said pepper spray was used against protesters but had no effect on the fire.

In a statement, the tent embassy said the protesters’ actions and smoking ceremony was done without the “knowledge, consent or mandate” of the embassy’s council or Traditional Owners responsible for the embassy’s regulation.

“Although we support the concept of nonviolent direct action, we do not condone the destruction of public and private property,” the statement reads.

ACT Emergency Services were called to the scene just before midday and evacuated the building as a precaution.

Social media footage shows police dragging protesters away from the front steps of the building and a large fire burning at the doors.

There is extensive damage to the front of the heritage-listed site.

A fire was previously started by protesters near the building on December 21.

Commander Champion said there were no significant injuries and no arrests had been made as of Thursday afternoon.

“The investigation is still underway and should we find those responsible, they will be prosecuted,” she said.

Superintendent Sam Evans from ACT Fire and Rescue said the fire did not extend into the building, although the interior fire alarms activated.

“There is water and smoke damage inside the structure,” he said.

Andrew Harper from the Museum of Australian Democracy, which is located at Old Parliament House, said he was devastated.

“We are very concerned about the damage,” he said.

“We will be closed for some time but as soon as we can we will be back open sharing this iconic building with the public again.”

It remains unclear whether the doors — the originals from 1927 — remain salvageable or how extensive the damage inside the building is, Mr Harper says.

A group of COVID-19 anti-vaccine campaigners broadcast their protest and parts of the fire on social media.

One protester told Sky News the group was there “for positive reasons” but added they “had to burn that door down just to get the message across”.

Prime Minister Scott Morrison said he was “disgusted and appalled” by the fire.

“It is disgraceful,” he said.

“Authorities should act swiftly in accordance with the law and people should face consequences of their actions.”

The tent embassy will hold a three-day event across January 25, 26 and 27 to mark its 50th anniversary and to “honour and mourn our past”.